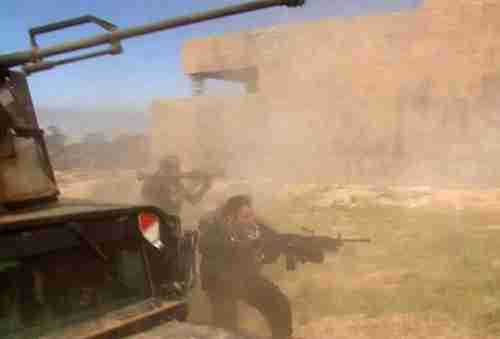 Iraqi government forces entered Tikrit on Wednesday, driving out fighters from the Islamic State (IS or ISIS or ISIL or Daesh) who fled the city, leaving behind hundreds of roadside bombs, according to Iraqi officials.

The Iraqi forces are not, for the most part, from the Iraqi army. Only a single Iraqi army brigade, about 3,000 soldiers, are involved. The bulk of the force are 20,000 fighters from Shia tribal militias, known as Hashid Shaabi (Popular Mobilization) forces. There are also about 1,000 Sunni tribesmen in the force.

This entire force is under the command of a Ghasem Soleimani, a top general in Iran’s Islamic Revolution Guards Corps (IRGC), supported by dozens of Iranian military advisers.

Tikrit is the home town of Saddam Hussein, and when he was in power, Saddam Hussein was violent and brutal to the Shias. I recall numerous stories of atrocities being committed by Saddam as one of the justifications of the 2003 Iraq war.

So today a massive Shia army, under Iranian command, is entering Saddam Hussein’s home town, to expel ISIS and take control. As one analyst asked, will the Sunni people of Tikrit treat the Shia army to be liberators or invaders?

According to US Army Gen. Martin Dempsey, testifying before Congress on Wednesday:

We are all concerned about what happens after the drums stop beating and ISIL is defeated, and whether the government of Iraq will remain on a path to provide an inclusive government for all of the various groups within it. […]

There’s no doubt that the combination of the Popular Mobilization forces and the Iraqi security forces, they’re going to run ISIL out of Tikrit.

The question is what comes after, in terms of their willingness to let Sunni families move back into their neighborhoods, whether they work to restore the basic services that are going to be necessary, or whether it results in atrocities and retribution.

Fears of Shia on Sunni atrocities and retribution will not be unexpected. According to an Amnesty International report published last year in October:

In recent months, Shi’a militias have been abducting and killing Sunni civilian men in Baghdad and around the country. These militias, often armed and backed by the government of Iraq, continue to operate with varying degrees of cooperation from government forces – ranging from tacit consent to coordinated, or even joint, operations. For these reasons, Amnesty International holds the government of Iraq largely responsible for the serious human rights abuses, including war crimes, committed by these militias.

The victims were abducted from their homes, workplace or from checkpoints. Many were later found dead, usually handcuffed and shot in the back of the head. Reports by families of the victims and witnesses have been corroborated by Ministry of Health workers, who told Amnesty International that in recent months they have received scores of bodies of unidentified men with gunshot wounds to the head and often with their hands bound together with metal or plastic handcuffs, rope or cloth. Photographs of several bodies shown to Amnesty International by victims’ relatives and others viewed at Baghdad’s morgue, reveal a consistent pattern of deliberate, execution-style killings.

Some of the victims were killed even after their families had paid hefty ransoms. Several families told Amnesty International how they had received the dreaded call from the kidnappers, had searched frantically for the ransom money and had managed to pay it, only to discover that their loved one had still been killed. “I begged friends and acquaintances to lend me the ransom money to save my son, but after I paid they killed him and now I have no way to pay back the money I borrowed, as my son was the only one working in the family”, a grieving mother told Amnesty International.

Scores of other victims are still missing, their fate and whereabouts unknown, weeks and months after they were abducted.

These kinds of atrocities, Sunni on Shia, were the norm when Saddam Hussein was power. Once the US ended the war with the “surge,” most of these atrocities ended. But once the US forces withdrew, the atrocities returned, this time Shia on Sunni.

During Wednesday’s testimony before Congress, American officials spelled out six concerns that U.S. officials have about Iran:

The US is not taking part in the invasion or liberation of Tikrit, even with air strikes. But the US is expected to play an important role later, when the Iraqi forces move on to recapture Mosul from ISIS. USA Today and McClatchy and Amnesty International (Oct 2014) and Al Arabiya

In January, Russian officials said that they will be reinforcing the military on Crimea in 2015:

In 2015, the Defense Ministry’s main efforts will focus on an increase of combat capabilities of the armed forces and increasing the military staff in accordance with military construction plans. Much attention will be given to the groupings in Crimea, Kaliningrad and the Arctic.

This week, Russia’s Foreign Ministry added to the information by saying that nuclear weapons are on the table. According to Mikhail Ulyanov, head of the Department for Nuclear Non-Proliferation and Weapons Control, referring to Crimea:

I don’t know if there are any nuclear weapons there at the moment and I am not aware of such plans, but in principle Russia can do this.

Naturally Russia has the right to put nuclear weapons in any region on its territory if it deems it necessary. We hold that we have such a right, though Kiev has a different opinion on this matter.

This is typical of the kind of garbage that comes out of the mouths of Russian officials almost every day.

Ulyanov is head of Russia’s Department for Nuclear Non-Proliferation, but he has no idea whether Russia has put nuclear weapons into Crimea? Credible.

But Crimea is not Russian territory. It is a part of Ukraine that Russia’s army has invaded and is occupying. It was just a couple of days ago that Russia’s president Vladimir Putin admitted that he had lied last year about Russia’s invasion of Crimea. It appears that Russia is planning a major military buildup in occupied Crimea in order to threaten all the nations bordering the Black Sea, including Turkey, Georgia, Bulgaria and Romania. Russia Today