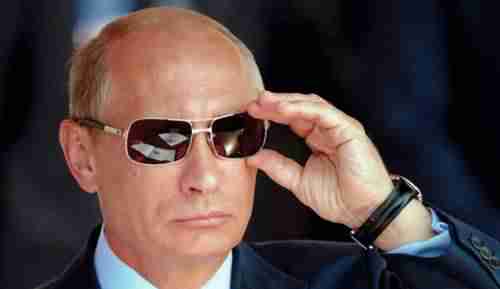 Russia’s president Vladimir Putin ended his 10-day disappearance on Monday by attending his scheduled appearance with the president of Kyrgyzstan in St. Petersburg. He was one hour late for the meeting, and different observers described Putin as looking “healthy,” “fit,” “puffy,” “sweaty,” and “pale,” respectively, suggesting that he may have been ill. Putin himself offered no explanation for his absence, except to say that “life would be dull without rumors.”

No matter what the reason for Putin’s absence, the disappearance has highlighted the potential leadership crisis in the fallout over the assassination of Putin’s very high profile political opponent Boris Nemtsov, possibly under the orders of Ramzan Kadyrov, the leader of Chechnya. According to one Moscow commentator, the problem is that only Putin should be able to violate any Russian law with impunity, and the assassination seems to mean that Kadyrov can do the same:

If a dictator is no longer able to maintain total control over the government, it is a potential disaster for him.

Kadyrov’s boldness may be a consequence of increasingly widespread questions about Putin’s leadership, especially regarding the economy. Although his poll numbers remain high, the economy is crashing, largely because oil and gas prices have been crashing.

This brings the Ukraine situation into play. It is the first anniversary of the invasion and occupation of Crimea, and Putin has been bragging about how he fooled the West by lying about it. The occupation of Crimea is widely admired within Russia, but the war in east Ukraine is raising many questions, because there is no end in sight and it is costing Russia a fortune at a time of a plunging economy.

So Putin may be ripe for a coup or other ouster by his growing list of enemies, but that is not necessarily good news. Putin’s successor would most likely be from the authoritarian regime that ran the Kremlin prior to the 1991 collapse of the Soviet Union. Furthermore, any such successor regime could not risk showing weakness, so he would have to be even more aggressive in many ways, including in Ukraine, where the attack on Mariupol and all of southern Ukraine would be launched. Such a regime would also almost certainly tighten the screws even further on the Russian people. So, to anyone pleased with the prospect of the departure of Vladimir Putin: Be careful what you wish for. Irish Times and Interpreter/Paul Goble and Jamestown and Interpreter/Paul Goble

The talking points of the Russian and Chinese internet trolls

Anyone who, like myself, writes about Russia or China is likely to run into internet trolls who are paid by the respective nations to harass the writer and post favorable comments on forums, blogs, and news articles. The comments range from lies and disinformation to abuse and profanity.

Each of these trolls is given a list of talking points by the trollmaster who hires him. A study of these internet trolls reveals some interesting information, including their talking points.

Chinese trolls are nicknamed the “50-cent party,” because it is believed that they earn 50 cents for each posted comment. Chinese trolls were first launched in 2004, and a 2013 estimate by researchers at Harvard University puts the total number at 250,000 to 300,000. A 2014 email leak included a list of the trollmasters’ instructions and talking points:

As an aside, my web site has been attacked a number of times by Chinese hackers.

Few details are known about Russia’s internet troll program, but an undercover operation in St. Petersburg revealed that trolls are paid about $36.50 for an 8-hour work day. According to information that we posted last year in “Russia uses an army of trolls on social media,” each troll is expected to maintain six Facebook accounts, posting three times a day in each. On Twitter, they are expected to manage 10 accounts and tweet 50 times a day.

Russia has an extremely aggressive troll organization known as the “G-Team.” They are anti-American, anti-Semitic, and anti-liberal, and go further than simply trolling in some cases by threats of physical harm and even murder. The trollmasters’ instructions and talking points include the following:

In the last year, a new talking point has been added: “labeling the Ukrainian government fascist.” Geopolitical Monitor

The above graph shows dramatically what has been happening with oil prices, which are now approaching $40 per barrel.

The green line shows Barrels of Oil Produced Daily (BOPD) in North Dakota, where there are many fracking rigs. The black line shows the price variations (dollars per barrel of oil = $/BO) since 1970.

New oil fracking technology has caused an explosion in output from US rigs, starting around 2010 when oil was at $120 per barrel, and oil production has been increasing hyperbolically since then. Oil prices have crashed in the last year, and it would not be surprising to see them fall to $30 per barrel or even $15 per barrel, a price last seen in 2000.

As oil prices have been crashing, the number of rigs has been falling steadily. But oil production has been continuing to increase because the best producing of the existing rigs have low marginal costs, and can make money even when oil is well below $40 per barrel. In fact, despite the tumbling number of active rigs, the U.S. is pumping more oil than any time since 1972.

This is a huge economic dislocation that is affecting not only Russia but many other countries as well. It is expected to go on for another one or two years. Some people will be winners and some will be losers, and there are certain to be unintended consequences. North Dakota Drilling and Production Statistics and Bloomberg