Almost all mosques have been destroyed in Central African Republic 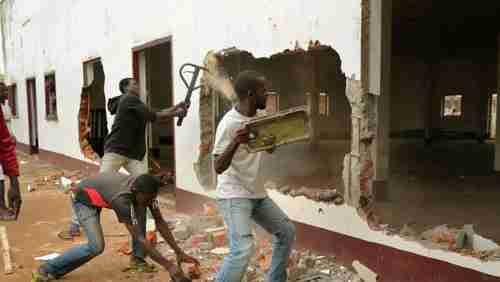 Almost all of the 436 mosques in the Central African Republic (CAR) have been destroyed by months of bloody fighting between Christians and Muslims, according to Samantha Power, US ambassador to the United Nations.

The CAR sectarian war began in March 2013. Francois Bozizé, the Christian former president of CAR, was ousted in a coup in March 2013 by Michel Djotodia, who became president and served until January 2014.

After Djotodia’s coup took place in March 2013, Muslim Seleka militias began committing atrocities, particularly targeting the Christian constituencies of the deposed Francois Bozizé. In December 2013, French Foreign Legion peacekeeping troops arrived to disarm the Seleka militias, but then the Christian anti-balaka militias “rushed into the vacuum,” and began committing atrocities in 2014, for revenge against the Selekas. Since then, both Christians and Muslims have been committing atrocities, and it has become a full-scale generational crisis war. Thousands have been killed, and millions have been displaced. Susan Rice called the destruction of almost all mosques in the country “kind of crazy, chilling.”

A European Union one-year military mission in CAR that was launched in April 2014 is now coming to an end. General Philipe Ponties, who led the mission, said he was satisfied with the outcome:

We are leaving a city [the capital city Bangui] to which peace has been restored and in which a political process is now in motion. People are now leaving the refugee camps and the internally displaced are returning to their homes. I have the impression that we have accomplished our mission. […]

The mission was charged with securing the airport and parts of the capital, Bangui, and with providing assistance for the setting up of a UN mission in the country.

According to Ponties, these goals have been more or less achieved.

This is really an incredibly bizarre conclusion. Bangui may be the capital city of CAR, but it is just one city in a country with enormous land area, and atrocities are continuing by both Christians and Muslims across the entire country. Even in Bangui, there are still marauding gangs of murderers who will now have a free hand now that the EUFOR troops are leaving.

Just this weekend, there was massive violence in the central part of the country, near the town of Kaga-Bandoro. Violence broke out when Muslim herders noticed that their cattle had been stolen. In retaliation, Muslim Seleka militias ransacked several Christian villages, killing 11 people. In a country as vast as CAR, these kinds of attacks might occur every day, and the outer world would never know.

The worst is yet to come in CAR, and as in the case of every generational crisis war, the war will not end until there is some kind of explosive climax that will be remembered for decades or centuries. AP and Deutsche Welle and AP

Russia finally begins to grasp the danger posed by ISIS

Russia’s government, whose unlimited support for the regime of Syria’s president Bashar al-Assad is a major reason for the existence of the Islamic State (IS or ISIS or ISIL or Daesh), is suddenly discovering that ISIS is a threat to Russia itself.

At a recent top-level meeting in Moscow of the Russian Security Council, Nikolai Patrushev is quoted as saying:

We should take extra care about the threat posed by militants involved in the conflict on the side of the terrorist groups and returning from those hot spots. It is no secret that a large number of mercenaries from Russia are fighting overseas today in the ranks of those bandit groups. [As] they return home, they might bring the skills of sophisticated terrorism to our land, including those characteristic of the group that calls itself the Islamic State of Iraq and Levant [ISIL].

[ISIS] does not respect state boundaries. … It is like a cancer, a metastasis, growing in different directions. This is all very worrying and concerns us too, concerns the interests of our national security and that of our friends in the region.

Russian propagandists claim that the West finances ISIS militants to weaken Russia, while even ordinary citizens know that 90 percent of the militants’ resources are of local origin, such as racketeering, sharia taxes (zakat), voluntary contributions by sympathizers, payoffs from officials, etc.

In fact, Russia can take a great deal of the credit for the rise of ISIS in the first place.

That is the specific cause and effect that led to the creation of ISIS. The primary blame goes to Bashar al-Assad, who is guilty of war crimes and crimes against humanity. Secondary blame goes to Russia’s president Vladimir Putin, for supplying heavy weapons to al-Assad, and also to Iran’s Supreme Leader Ayatollah Seyed Ali Khamenei, for supplying troops and weapons to al-Assad. Both Putin and Khamenei are war criminals because they supplied the weapons and manpower to al-Assad, knowing full well that al-Assad was committing war crimes and crimes against humanity.

So now Iran has to fight ISIS soldiers in Iraq, and Russia is finally noticing that ISIS soldiers from Syria are headed back to commit acts of terror on Russian soil. Both Russia and Iran deserve what happens to them. Unfortunately, it is going to happen to everyone else as well, and the rest of us do not deserve it. Jamestown