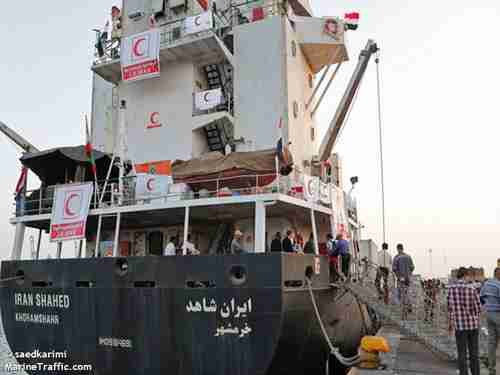 The Iranian ship Iran Shahed (“Iran Rescue”), which Iran says is bringing humanitarian aid, is set to arrive at Yemen’s port of Al-Hudaydah on Thursday. According to Iran, the ship will unload 2,500 tons of “humanitarian aid,” accompanied by hundreds of passengers described as “medical relief workers.” It’s suspected that at least part of the shipment are weapons and ground troops from Iran’s Islamic Revolution Guards Corps (IRGC). The cargo ship is accompanied by two Iranian warships, the “Vosper” and “Bandar Abbas.”

The United States, Saudi Arabia and Egypt have imposed a sea and air blockade on Yemen, and have demanded that the ship stop off at Djibouti for inspection. The Iranians have refused to do so, and are threatening a military confrontation if an attempt is made to prevent the cargo ship from docking in Yemen.

Readers may recall that this is the same stunt that Russia used in conjunction with its invasion of Ukraine. Russia sent in one convoy after another, each one with hundreds of large trucks. The Russians claim that they contained only humanitarian aid, but many believe that they also carried weapons and soldiers.

American warships have been tracking the Iranian ships. However, it’s thought that President Obama would back off on any confrontation with Iran, just as he did when he flip-flopped over the “red line” he had set over Syria’s use of chemical weapons.

If the Iranian cargo ship reaches port, then it will set a precedent for future ship convoys delivering “humanitarian aid” to Yemen.

However, the blockade is also being enforced by Saudi Arabia and Egypt, whose governments are presumably less shy than Obama’s. So once again, we’re seeing a game of chicken being played out in the Mideast. Either Saudi Arabia will back down, or Iran will back down, or there will be a confrontation on Thursday. Memri and Debka and NBC News

In repeat of Mosul disaster, Iraqi army abandoned US weapons in Ramadi

As militias from the Islamic State (IS or ISIS or ISIL or Daesh) approached Mosul last year, the soldiers in the Iraq army dropped their weapons and fled for their lives, leaving behind large storehouses of weapons that had been supplied by the United States.

When Iraq army soldiers fled for their lives last week as the ISIS militias approached Ramadi, they once again left behind storehouses of US-supplied weapons, according to Pentagon spokesman Steve Warren.

Fortunately, the haul was smaller this time, according to Warren. He estimated that a half dozen tanks were abandoned, a similar number of artillery pieces, a larger number of armored personnel carriers and about 100 wheeled vehicles like Humvees. He said some of the vehicles were in working condition; others were not because they had not been moved for months. AP

The Saudis are refusing to comment on the report, but in a March statement on the same subject, Saudi ambassador Adel Al-Jubeir said:

“But the kingdom of Saudi Arabia will take whatever measures are necessary in order to protect its security. There are two things over which we do not negotiate: our faith and our security.”

If true, this would certainly not be an unexpected turn of events. As we wrote last week ( “15-May-15 World View — Obama repudiates the Carter doctrine at bizarre GCC meeting”), the United States has been the guarantor of Saudi security for decades. When ambassador Al-Jubeir made that statement in March about “security,” he was specifically alluding to the American guarantee. Last week’s meeting of the Gulf Cooperation Council (GCC) at Camp David, hosted by President Obama, was a complete disaster for Saudi-American relations as Obama, viewed by Mideast leaders as having no clue what’s going on, lectured the GCC leaders who came that nothing would stop him from going ahead with nuclear deal with Iran, making any concession he had to make to do so, and the GCC leaders could like it or lump it.

The Saudis perceive that Obama has acquiesced to permitting Iran to develop a nuclear weapon, and the Saudis consider that to be an existential threat to their Kingdom. The logic of the situation actually requires the Saudis to seek nuclear technology from Pakistan, since not doing so would risk Saudi security.

So I believe we can say with certainty that the Saudis are at least exploring the purchase of nuclear technology from Pakistan, but it is unlikely that a final decision has yet been made.

This is a good time to remind readers what I’ve been saying for ten years, that Generational Dynamics predicts that in the coming Clash of Civilizations world war, China, Pakistan and the Sunni Arab countries will be enemies of the West, including the U.S., India, Russia and Iran. The prediction that Iran would be our ally seemed fantastical when I first wrote about it almost ten years ago, but in the last two years we’ve seen it coming true, to my astonishment as well as everyone else’s. CNN and BBC