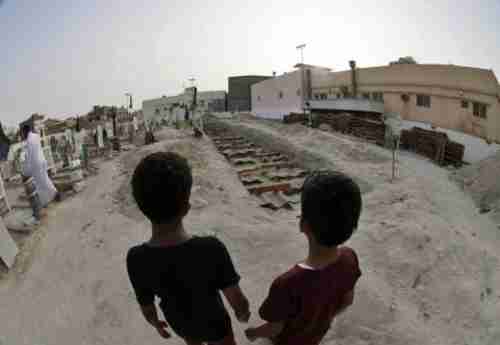 The Islamic State (IS or ISIS or ISIL or Daesh) is claiming responsibility for a suicide bombing during Friday prayers in the Shia Al Anoud mosque in Dammam, in eastern Saudi Arabia. A male was disguised in women’s clothing to evade detection by heavy security surrounding the mosque. He was stopped by security just as he entered the mosque and detonated the device. Three people were killed.

This follows by one week the bombing of another Shia mosque in eastern Saudi Arabia. ISIS claimed responsibility, and said it would not rest until all Shias were driven from the Arabian Peninsula.

Saudi officials condemned the terrorist bombing, and said it was an attempt to destabilize the security and unity of the Kingdom and local social cohesion:

Terrorists seek to destabilize the Arab and Islamic nations’ security. Terrorism will never succeed in dividing the Saudi nation or destabilize national security.

However, it appears that ISIS is doing exactly that, throughout the Mideast and Asia.

And it was just three weeks ago when when terrorists in Karachi attacked a bus full of Shias, killing 45, and left behind leaflets accusing Shias of “barbaric atrocities,” and warning of the “Advent of the Islamic State!” Arab News and AFP and Reuters

ISIS continues to gain supporters throughout the Mideast

A recent poll conducted by Al Jazeera Arabic asked the question, “Do you support the organizing victories of the Islamic State in Iraq and Syria (ISIS)?” An overwhelming 81% of those responding voted “Yes.”

Al Jazeera Arabic has an overwhelmingly Sunni Muslim audience, mostly in Saudi Arabia and Egypt, and the respondents were self-selected. But the size of the positive response shows that there is a sufficiently large population of ISIS supporters in the Mideast to feed its growth.

Furthermore, stories continue of young male jihadists from Asia, Africa, Europe and Russia traveling to Syria to join ISIS, and young females traveling there as well to marry them. They are attracted by the fact that ISIS appears to be winning in Iraq and Syria, and even defeating large enemies, including Iran, Hezbollah and the United States. In addition, reports indicate that ISIS is using its vast oil wealth to pay its fighters well.

According to Egyptian cleric, Khaled Al-Kholif, the fight against Shias is more important than the war against “the Jews and Crusaders”:

Our problem with the Jews and Christians in this world is ongoing. You get rid of the Christians, and along come the Jews, and so on.

Is it justified to be worried about modern Shiite ideology? The answer is: Yes. It is justified a thousand times over. Anyone who does not know and feel this should remember history. We don’t want another [Shiite conqueror] like the Fatimid Al-Muizz li-Din Allah.

Al-Kholif is invoking the name of the Fatimid caliph Al-Muizz li-Din Allah. Al-Muizz is considered to be the founder of Cairo, but to Egyptians he was the Shia conqueror of Cairo in 969, putting Egypt under Shia Fatimid control for a century. The fact that this battle is being mentioned today shows how deeply and bitterly the Egyptian people still remember that event of over a millennium ago. Al-Kholif continued:

Why would a victory of Shias mean that Jews and Crusaders would become the decision makers? The explanation is that Al-Muizz got along very well with Jews and Christians, because most of the citizens were Sunni Muslims who hated Shias. As a result, Christian and Jewish intellectuals were often appointed as officials and ministers, and they became the decision makers in the land of the Sunni Muslims in Egypt.

So Al-Kholif’s argument is really quite remarkable. Fighting Jews and Christians is just a war over “over petroleum, or over border crossings,” and losing is not very consequential. But losing a war to Shias is far more serious, because the Jews and Christians will become the decision-makers, as happened in the time of Al-Muizz, and “We will become foreigners in our own countries.” Amazing!

You know, when one is trying to understand other cultures, one is always astounded by little nuggets of information like this, where a battle that took place over a millennium ago is being used to justify a war today. People who are surprised by this should remember how much American policy today is still being influenced by the events of 1776.