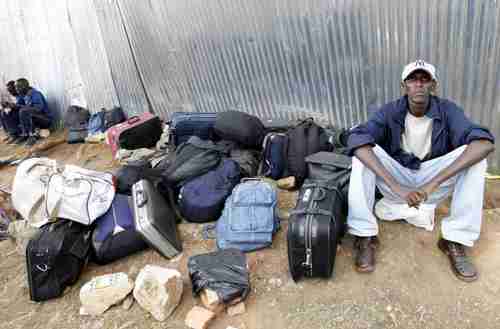 Student camp outside the American embassy in Bujumbura (Reuters)

Hundreds of students are camping outside the American embassy in Bujumbura, the capital city of Burundi, fearing violence by police and security forces. Elsewhere, the violent crackdown has created 100,000 refugees, many of whom have fled into Rwanda and Uganda.

Burundi is following a familiar pattern of a kind experienced by many countries in a generational Awakening era, one generation past the end of a bloody, genocidal civil war. The 1994 war between Hutus and Tutsis in Rwanda and Burundi, resulting it around a million deaths, left the survivors traumatized, vowing they would never let it happen again.

But now, a generation later, young people have no personal memory of the 1994 slaughter, and all the old hatreds that gave rise to the war are being inflamed again. This is raising fears that the civil war will be revived in all its fury, something that cannot happen in a generational Awakening era because the survivors will not permit it.

But just the fear of a renewed civil war is driving policies that are detrimental to Burundi. Burundi’s Hutu president Pierre Nkurunziza took office in 2005, and has served for two terms, which is the maximum allowed under the country’s constitution, written during the post-war Recovery era with the intention of preventing another civil war. Nkurunziza was appointed by the parliament in 2005, and was re-elected in 2010, and now wants to run for a third term in the 2015 election. He claims that since he was appointed as president in 2005, his first term does not count, and he can run for another term. He claims that his presidency will bring stability to Burundi. His Tutsi opponents say that his power grab will destabilize the country, and make a new civil war more likely.

Nkurunziza is following the violent crackdown on protesters that we have seen in other Awakening era countries, such as Iran, Syria and Thailand. Peaceful anti-government protesters are considered to be enemies of the state, destabilizing the country. President Nkurunziza, claiming that he knows best how to keep the country safe, massacres the peaceful protesters, just like Syria’s president Bashar al-Assad, just like Iran’s Supreme Leader Ayatollah Seyed Ali Khamenei, and just like Thailand’s Thai-Chinese élite army junta.

Nkurunziza has postponed the election from June to July 15, and still insists that he will run for a third term, something that his opponents say will risk a new civil war. International Business Times and Reuters and All Africa

Reports from unnamed officials say that the Obama administration has adopted a major shift in strategy in Iraq. The Obama administration is planning to establish a new military base in Anbar Province and send hundreds of additional American military trainers to help Iraqi forces retake the city of Ramadi and repel the Islamic State (IS or ISIS or ISIL or Daesh).

A day after President Barack Obama announced that the administration had no plan for defeating ISIS, anonymous Pentagon officials say that the Administration is planning a significant troop escalation in Iraq. According to the reports, 1,000 new troops will be added to the 3,080 troops already there.

Last year in June, President Obama announced that the U.S. would send 300 American advisors to train, advise and support the Iraqi securities forces fighting ISIS. Since then, this number has been increased, one step at time, from 300 to 800 to 1500 to 3100, and now presumably to over 4,000. He said that this was “not mission creep.” He insisted that the “U.S. will not be putting boots on the ground.” The goal is “to degrade and ultimately destroy the terrorist group known as ISIL.” All of this was in addition to air force strikes against ISIS.

President Obama, whose foreign policy has been one disaster after another, appeared to have no coherent policy in Iraq at all after saying on Monday, “We don’t yet have a complete strategy because it requires commitments on the part of the Iraqis,” even though many months had past. Pentagon sources quickly stated that they had presented several options and recommendations to Obama months ago, and they were waiting for him to make up his mind. Analysts are saying that 1,000 more troops just for training purposes will not make any difference, so it remains to be seen whether this announcement is just cosmetic, or whether there is more to it.

For those of us who have been around for a while, sending 1,000 more troops to Iraq looks very much like the kind of escalation and “mission creep” that got us into other wars with no planning. Washington Post and NY Times and CNN

An umbrella group of opposition fighters, known as the “Southern Front,” has captured one of Syria’s largest army bases, 56 miles south of Damascus, after 24 hours of fighting the Syrian army. The Southern Front is backed by the US and Jordan, and several Arab countries provide money and weapons. The Southern Front has now cut off Syria’s army from the border crossings to Jordan.

We have reported several times in the last few weeks that the army of Syria’s president Bashar al-Assad is facing numerous setbacks and may be near total collapse, and that Russia may end support for al-Assad. These new setbacks make a collapse more likely.

In the regions north of Damascus, another rebel alliance led by the al-Qaeda linked Jabhat al-Nusra (al-Nusra Front), has captured much of the region from Aleppo to the coastal city of Latakia. This includes the heartland of al-Assad’s Shia/Alawite ethnic group, and places that entire population in danger. Farther to the east, ISIS has taken control of large sections of the country, crossing over into Iraq.

There is apparently a “dog that didn’t bark” in the picture. We have described reports that Iran is invoking a 2007 mutual defense treaty with Syria, and that Iran would deploy tens of thousands of Islamic Revolution Guards Corps (IRGC) to defend al-Assad, especially in the coastal region around Latakia. So far, there is no sign that these reports have come to past, and now there are reports that Iran has rejected al-Assad’s request for up to 100,000 IRGC troops. Al Jazeera