The United Kingdom Foreign Office refuses to issue a travel warning regarding Tunisia after a gunman slaughtered 39 people on a Tunisian beach over the weekend. This means vacationers must keep their plans or lose thousands of dollars.

Travel company Thomson/First Choice announced they will allow “UK customers to ammend [sic] their bookings to another of its destinations free of charge, if they are due to travel before October 31.”

The foreign office released a statement about Tunisia, but stopped before they issued an actual warning.

“Further terrorist attacks in Tunisia, including in tourist resorts, are possible, including by individuals who are unknown to the authorities and whose actions are inspired by terrorist groups via social media,” the office stated on their website. “You should be especially vigilant at this time and follow the advice of Tunisian security authorities and your tour operator.”

Officials admit Tunisia is not a safe country to visit. On a map, the office listed places tourists should not travel to and advised only essential travel. 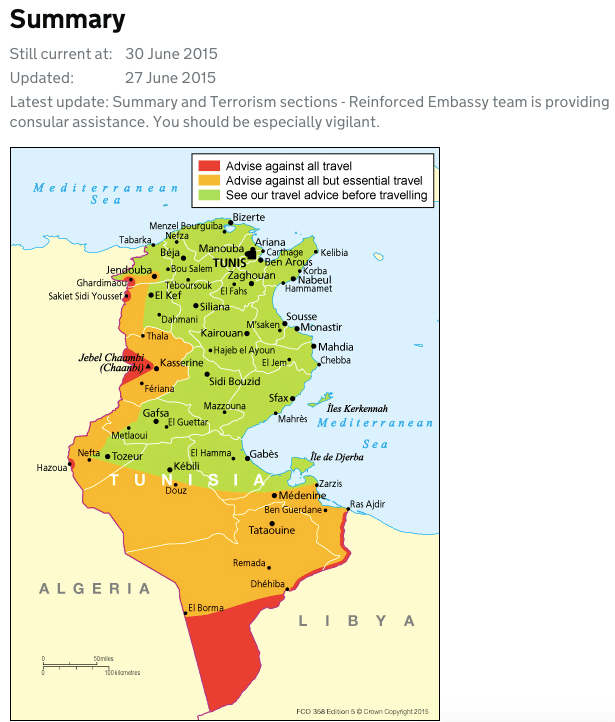 Doreen McKenzie, spokeswoman for the Northern Ireland Association of British Travel Agents, told travelers to check the fine print on their agreements with their travel company since July and August are the busiest vacation months.

“There are probably hundreds of Northern Ireland people in Tunisia at the minute and hundreds more are likely to be going in July and August which is the peak holiday period,” she explained, adding:

“All tour operators follow the guidance from the Foreign Office and the situation at present is travel with care.

“This means anyone who chooses to cancel their booked holiday will be subject to the tour operator’s booking conditions which will include cancellation fees. However, most tour operators are allowing free-of-charge changes and amendments with Thomas Cook allowing anyone due to travel to the country before or on July 12 to cancel or amend their holiday free of charge.

“Anyone due to visit the country for the rest of the summer season, ending on October 31, will also still be able to amend their holiday free of charge.”

The Foreign Office’s stance on Tunisia baffles Simon Calder, travel correspondent at The Independent. He argues it is outrageous for the map to claim that the two areas where terrorists slaughtered vacationers are safe. He also knows the Tunisian tourist authorities will use the Foreign Office statement to justify claims that the country is no more dangerous than France and Spain. Calder does not believe it:

The Tunisian tourist authorities may latch on to the Foreign Office advice as validation of claims that the nation is safe. They may also point out that atrocities can happen anywhere, as Londoners are all too aware as the 10th anniversary of the 7/7 bombings approaches. And they may note that France and Spain are rated alongside Tunisia as presenting a “high threat of terrorism”.

Yet even as someone who will happily return to Tunisia as soon as possible, I cannot accept that Benidorm and the Dordogne share the same risk profile as a poor country that shares a long, leaky border with the failed state of Libya – where a Kalashnikov, like human life, is cheap.

The Islamic State (ISIS/ISIL) took responsibility for both attacks in Tunisia. Terrorists from the group are slowly leaking into the country, known as a popular tourist attraction and one of the few stable countries in a volatile region. Last August, spectators at a soccer match flew an ISIS flag in the audience. Militants captured the town of Tataouine in March. Students at an all-girls high school in Kairouan, which is only 36 miles west of the beach attack in Sousse, unveiled enormous ISIS and Adolf Hitler flags at an end of school celebration. The government arrested 100 people with links to ISIS in February.