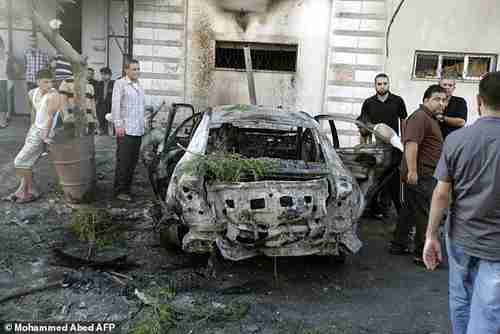 There were five explosions in Gaza on Sunday from bombs placed underneath five cars parked in front of their owners’ homes. The explosions were evidently coordinated, as they occurred almost simultaneously. There were no reports of serious injuries. The cars belonged to members of the armed branches of two different militant groups in Gaza, Hamas and Islamic Jihad. The two groups issued a joint statement on Sunday saying:

The culprits of the violence are in the camp of traitors. […]

Guilty hands are attempting to attack the resistance by blowing up its fighters’ vehicles, which only serves the occupier and its objectives.

The “occupier” is Israel. The “resistance” are Hamas and Islamic Jihad.

The statement is ironic because has reportedly been in peace talks with Israel for a five-year truce while, on the other hand, Hamas has launched a crackdown on Salafist groups in Gaza, with as many as 100 members or supporters arrested and jailed.

It’s believed that the bombs were placed by one of the smaller militant groups in Gaza that have declared allegiance to ISIS. AP and Daily Mail (London)

Possible rapprochement in the works between Hamas and Saudi Arabia

The increasing influence of Iran through last week’s nuclear agreement with the West and of the Islamic State (IS or ISIS or ISIL or Daesh) are causing further shifts in Mideast relationships. Relations between Hamas and Saudi Arabia have been particularly strained because of Hamas’s close relationship with Iran and because Saudi Arabia sided with the Palestinian Authority in its conflicts with Hamas.

However, a meeting of Friday between Hamas chief Khaled Meshaal and Saudi Arabia’s new king Salman bin Abdulaziz al Saud is being viewed as a possible “game changer” in the relationship between the two. According to a Hamas official, Salah al-Bardawil, “We sensed that there is a readiness in Saudi Arabia to support the Palestinian cause.”

It is thought that the rapprochement signals that Hamas has decided to distance itself from Iran, and that the Saudis will help rebuild Gaza, which is still devastated from last summer’s 60 day war with Israel.

As we wrote yesterday in “19-Jul-15 World View — Behind the scenes in the Iran nuclear deal”, the Iran nuclear deal is forcing yet another realignment in the Arab world, as it deteriorates into war. Events seem to be moving more quickly in recent weeks. Jerusalem Post and Reuters

Greece’s banks to reopen at start of another stormy week

The European lenders have approved a bridge loan for Greece, to prevent bankruptcy for a few weeks, and are providing liquidity so that Greece’s banks can reopen on Monday for the first time in three weeks. Greek citizens have been restricted to ATM withdrawals of only 60 euros per day, but now there’ll be a small lightening of the rules: They will be permitted to take an entire week’s withdrawals — 420 euros — in a single day, so they won’t have to stand in line at the ATM every day.

It will be anything but smooth sailing this week. Austerity measures are being imposed on Greece. But these are the same kinds of austerity measures that the Greek people voted down in a referendum, and they are the measures that prime minister Alexis Tsipras said that he does not believe in, but had to accept because the European lenders were “holding a knife at my neck.”

In fact, nobody believes any more that the austerity measures will work. Germany’s finance minister Wolfgang Schäuble is calling for a temporary “Grexit” — for Greece to leave the eurozone and use a different currency for up to five years. But German Chancellor Angela Merkel has completely ruled out any Grexit, and she is apparently pushing for a new 86 billion euro bailout for Greece, which will kick the can down the road for a while. In the past she has been adamantly opposed to forgiving any part of Greece’s debt, but she has indicated a willingness to consider restructuring the Greek debt in the fall, possibly by extending the payment schedule out for decades. Kathimerini and Bloomberg