LONDON, United Kingdom – Campaign 4 Truth, an umbrella organisation along with EO Antisemitism, Yadbyaduk, Irish 4 Israel and UKFOI today held a rally in Whitehall opposing the Vienna Accord, the nuclear deal struck between the so-called P5+1 (China, France, Russia, the United Kingdom, and the United States, plus Germany) and the Islamic Republic of Iran. The London Rally Against the Iran Agreement finished when a letter was delivered to the Prime Minister at 10 Downing Street (see image below). 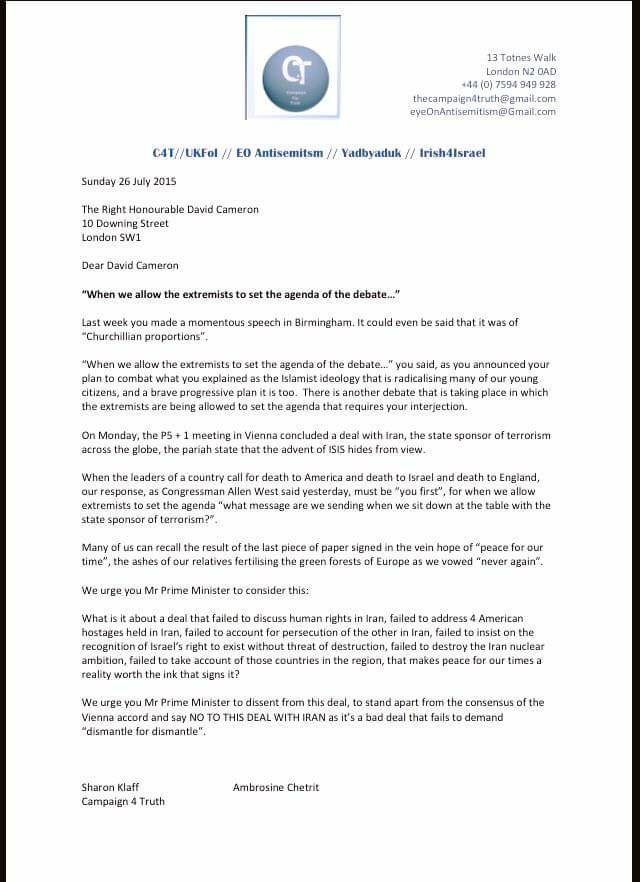 During the rally speeches were given and messages read from supporters who could not attend on the day but nevertheless reject what one contributor labeled the “dangerous and deceptive dictates of political correctness”. It opened with heartfelt remarks from Ambrosine Shitrit of the grassroots campaign group, Campaign 4 Truth.

She said the rally represented “a community that is shocked and angry that the west have conceded and is cooperating with a country that has constantly called for the annihilation of Israel the United States and the United Kingdom.” Turning to the agreement itself she described it as “a strategy paper that maps Iran’s emergence as a regional nuclear power, with the full blessing – even support – of the United States and the international community, known as p5 +1.”

Shitrit reminded those at the rally of Israeli prime minister Benjamin Netanyahu’s depiction of Iran as a “threat to the entire world” which now has a deal that could “pave its way to the bomb”, rather than block it. She concluded:

“Set aside for the moment the honour killings, the gay hangings, the child brides, the rape of dissidents and outspoken bloggers – we are talking about a threat to wipe the Jewish nation off from the face of the earth – we are talking about a regime that, according to Bernard Lewis, will not be bound by the mutually assured destruction, the understanding that maintained the balance of power throughout the cold war.”

Colonel Richard Kemp, a retired British Army officer who commanded the British Forces in Afghanistan, lent his support to the rally from overseas. In a message read to those present he congratulated them for “making the effort to come here today to protest this truly ill-judged and dangerous agreement.” Describing the deal as one done with “a fascist, imperialist, totalitarian, murderous dictatorship” he explained that he believes it makes matters worse not better:

“This deal with Iran makes war more likely not less likely as has been claimed by those who have sought to drive it through at all costs. That is what this deal endows to our children and grandchildren – a greater prospect of war, not just in the Middle East, but in the world.”

He explained that Iran’s ability to cause trouble around the world has been enhanced by the Vienna Accord:

“Stalking malignantly across the Middle East and the world beyond, Iran and its proxies have been terrorising, subverting and destabilising 30 countries. This infamous agreement injects 1.5 billion dollars into Iran’s coffers, dollars that will enable the Ayatollahs to expand their imperialist violence many times over.”

Colonel Kemp, a man familiar with the Middle East, explained that for a region where “weakness is despised and strength is respected” the deal shows the West “to be not just weak but supine”. He warned:

“Never in history has a weakness and compromise ever contained a dangerous situation. In fact the opposite is true. Weakness acts as a catalyst. It fans the flames of conflict, encourages and empowers the belligerents to even greater acts of aggression. This is what will happen with Iran. I assure you of that.”

He concluded with warnings of nuclear proliferation. Pointing out that Israel is not alone in fearing a nuclear-armed Iran, he said Turkey, Saudi Arabia and Egypt are already considering their own nuclear capability. He ended his message to the rally:

“So the endowment for our children and our grandchildren is not just the increased prospect of war fomented by an emboldened and fortified Iran. It is the very real likelihood of a nuclear-armed terror state and unprecedented nuclear proliferation across the Middle East and beyond – a proliferation that the civilised world has worked hard to prevent since 1945.”

Passionate comments from Irish 4 Israel were equally damning of the Accord: “The Iranian deal is a joke, Obama wanted a deal at any cost an we say to Prime Minister Cameron, we expected better of you. We expected you to stand up for Israel, instead Mr Cameron you too stabbed Israel in the back.”

Comments from Dr Martin Sherman were also conveyed. He is an academic who also served for seven years in operational capacity in the Israeli Defence Establishment and was an administerial advisor to Yitzhak Shamir’s government. He said Netanyahu’s description of the deal as a “stunning historic mistake” understated the truth. He continued:

“For what emerged from the negotiations in the Austrian capital was nothing less than a catastrophic failure of strategic resolve on the part of the US-led West. It was a craven capitulation on a calamitous scale. Indeed, as more details emerge on the “deal” concluded with Iran last week in Vienna, the full extent of its calamitous significance is coming to light.

“It was more than a betrayal of America’s closest ally in the Middle East, Israel. It was in many ways a betrayal of Western civilization and the democratic values it has bestowed on millions.

“For those who might find this a little strident, I invite them to find an alternative characterisation for an arrangement that enhances politically, enriches economically and empowers militarily, a homophobic, misogynistic tyranny that is unswervingly and brazenly devoted to the subjugation and destruction of Western civilization – even after the conclusion of the ignominious ‘deal’.”