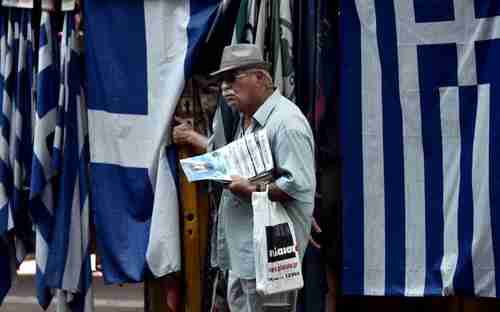 The Athens stock market will open again on Monday, and analysts are expecting pent-up selling pressure to knock 20% or more off the Athens general index. According to one analyst, “The possibility of seeing even a single share rise in [Monday’s] session is almost zero.”

Also on Monday, new negotiations are to begin between Greece and the lending institutions over such things as fiscal adjustment, privatizations, bank recapitalization and structural reform, including pension overhauls. The objective is to reach agreement by August 11, when a new Eurogroup summit can give its approval. Greece has to secure a fresh bailout payment by August 20, when it has to make a payment to the European Central Bank, or again face default. Reuters and Kathimerini

Puerto Rico to default on Tuesday

As expected, Puerto Rico missed a $58 million bond payment on Saturday, but because the deadline was Saturday, Puerto Rico has until the end of Tuesday to make the missed payment. However, Governor Alejandro García Padilla told journalists in San Juan on Friday, “We don’t have the money.”

Puerto Rico faces $635 million in debt-service payments this month, and has to make $5.4 billion in bond payments through next summer, leaving little for services such as trash pickup, road maintenance, education and other government functions. It’s expected that the default will cause an extremely chaotic international crisis. International Business Times

With inflation and shortages increasing in Venezuela, shoppers are breaking into supermarkets to seize scarce consumer staples including milk, rice and flour. In one such incident on Friday in the southeastern city of Ciudad Guayana, one person was killed in the mêlée, and dozens were arrested.

As usual, president Nicolás Maduro blamed it on the United States, particularly on U.S. General John Kelly, Marine Corps commander of the Southern Command, who predicted in February that there would be a “social implosion” in Venezuela in July. According to Maduro:

You all know that a military general of the United States doesn’t predict. He orders and the battered Venezuelan right-wing executes.

Venezuela’s economy is in a state of rapidly increasingly hyperinflation, with the currency losing 32% of its value in the black market in the last month alone. The inflation rate is well into the triple digits, though precise figures have not been published. Businesses are quickly switching over the dollar currency as a result.

Venezuela’s economy has been collapsing because of huge socialist spending programs begun by Maduro’s predecessor Hugo Chávez, and because the price of oil has plunged to below $50 per barrel. Oil is the main export of Venezuela and provides most of the country’s foreign currency.

However, on Friday Venezuela announced that it has received $5 billion in funding from China, according to a long-standing agreement. China is Venezuela’s primary financier and has lent the nation more than $46 billion to be repaid in oil, after accords signed with late president Hugo Chávez in 2007. Reuters and Bloomberg (16-Jul) and Latin American Herald Tribune and Reuters

Venezuela in border dispute with Guyana

Venezuela’s economic collapse has affected the country’s relations with their neighbor Guyana. An 1897 treaty between Venezuela and Guyana (then British Guiana), set the borders between the two countries, but Venezuela wants to repudiate the treaty, now that ExxonMobil estimates that it has found 700 million barrels of crude oil in Guyana’s waters. Jamaica Observer

Turkey returns to war with the Kurdish PKK

Two weeks ago, Turkey was determined to avoid war. Turkey’s announcement that it will make its airbases available to warplanes fighting the so-called Islamic State (IS or ISIS or ISIL or Daesh), and its decision to join the US-led coalition fighting ISIS, were greeted in the West as a sign of new hope.

But now Turkey is mainly embroiled in a new war with the Kurdistan Workers’ Party (PKK), both in northern Iraq and in southeast Turkey. While the West is bombing ISIS targets, Turkey is bombing PKK targets.

Turkey and the separatist terror group PKK fought an off and on civil war for almost four decades, but finally agreed to a ceasefire in 2012. On July 20, there was a massive terrorist attack in the town of Suruç, and on July 23, Turkey declared war on PKK.

Turkey did an investigation, and said that the airstrikes targeted PKK bunkers, and that therefore there were no civilians killed.

The KRG has responded by asking the PKK to “withdraw its fighters from the Kurdish region so to ensure the civilians of Kurdistan don’t become victim of that fighting and conflict.”

For its part, the PKK on Sunday sent a suicide bomber in an explosive-laden tractor to an army outpost in southeastern Turkey. Two soldiers were killed, along with the suicide bomber.

The net result of all this is that the Turkish people are now facing the renewal of a conflict that they thought and hoped was over for good. The other result is that the Turks and the US are now fighting two completely different enemies in the same region. This situation can be spun, of course, but it looks like a total mess to me.

As I’ve been writing for years, Generational Dynamics predicts a full-scale sectarian war in the Mideast, with Iran an ally of the West fighting the Sunni Arabs. Furthermore, there’s no jihadist war against the West, at least not yet, since the number of Christians killed by Muslims is minuscule compared to the number of Muslims killed by Muslims, especially in the Mideast. Events are moving very rapidly, changing on almost a daily basis. We don’t know what’s going to happen next week, but Generational Dynamics tells us what the destination is, and the destination is not good. Zaman (Istanbul) and Hurriyet (Ankara) and Zaman and Hurriyet