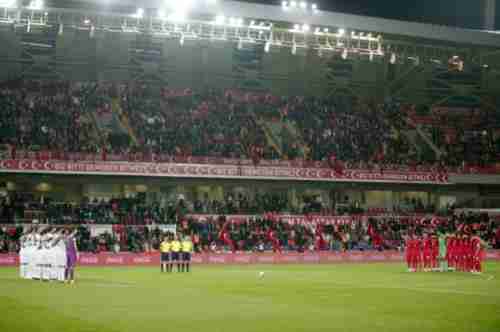 Greece’s players, left, and Turkey’s players, right, bow and observe a minute of silence to honor the victims of the Paris attacks on Wednesday (AP)

Turkish soccer fans booed and chanted “Allahu Akbar” [God is Great] during a moment of silence called in remembrance of last week’s Paris attack. The moment of silence was held prior to a soccer game versus Greece. Turkey’s Prime Minister Ahmet Davutoglu and Greece’s Prime Minister Alexis Tsipras watched the game together as a sign of reconciliation after centuries of bloody warfare.

It is not clear to me exactly what the Turkish fans were booing. Here are some possibilities:

Turkey and Greece drew with scores of 0-0 in the game. Today’s Zaman (Istanbul) and Washington Post

Rwanda’s senate has unanimously approved a draft constitution that will allow the Tutsi president, Paul Kagame, to run for a third term, not permitted under the existing constitution. The new constitution will have to be approved by a referendum.

We have written in the past how this kind of situation has led to violence in other countries, in the period following a bloody generational crisis civil war:

This kind of power grab is typical of leaders who take power after the end of a bloody generational crisis civil war fought between ethnic groups. The leader claims that he is the only force preventing the violence of a new civil war which, from the point of view of Generational Dynamics, is utter nonsense. To the contrary, the power-grabbing leader becomes the cause of renewed violence.

Kagame’s Hutu political opponents are certain to start protesting his decision to violate the existing agreement that ended the 1994 war between Hutus and Tutsis. The next step will be up to Kagame, who may follow the example of others and begin using violence to eliminate the peaceful protesters. Reuters and AFP