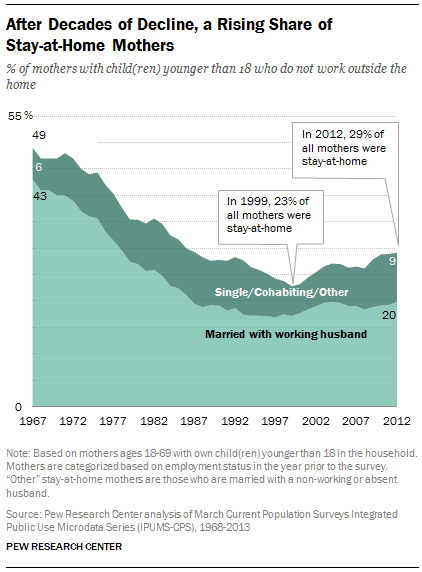 After decades of decline, the number of stay-at-home moms is increasing (Pew Research)

News stories on gender issues are often pretty bizarre and often fictional, but this one of the most bizarre gender stories I’ve seen in a while.

Allegedly, some 1,000 young “heavily intoxicated” men carried out dozens of sexual assaults on women in the city center of Cologne, a city in western Germany, on New Year’s eve. Some 90 criminal complaints, including one allegation of rape, have been brought to the Cologne police department after women said they were molested by a crowd of men. Police have said that about a quarter of the complaints related to sexual assaults and that they believed the assaults were probably intended to distract the victims, allowing attackers to steal mobile phones and other devices. Similar attacks were reported in Hamburg on New Year’s Eve, with 39 reported sexual assaults and 14 robberies.

What makes this a particularly touchy politically issue is that the 1,000 men were described as “Arab or North African” in appearance.

According to one official:

We will not accept that groups of North African men gather expressly for the purpose of debasing women by sexually assaulting them.

If, in fact, 1000 migrants conspired via social media or whatever to sexually assault women on New Year’s Eve, it would indicate a kind of mass collusion that would suggest that migrants really are close to total war with Europeans. This would not be just a gender story, but a very significant geopolitical story.

But I have learned over the years that most of these gender stories are total nonsense, and I’ll be waiting to see whether this one is or not.

The first thing that’s suspicious about it is that, with hundreds of sexual assaults, not a single perpetrator has been arrested, even though six days have passed, though three suspects have been identified but not arrested.

The second thing that’s suspicious is that with all these sexual assaults going on in large crowds of people ringing in the new year, there are no reports of other people, men or women, stepping up to intervene in these attacks. There are also no reports of men coming forward to corroborate the reports.

Third, no attribution is being provided by this “Arab or North African” description, making it appear, until an investigation proves otherwise, that this accusation is not dissimilar to the hysterical accusations that resulted in the Salem Witch Trials of 1692, where one group of girls accused several other women of being witches in league with Satan.

It’s worth recalling just how hysterical and hypocritical feminists are about rape. Julian Assange has been hiding from rape charges in Ecuador’s embassy in London, and not one single feminist has spoken out to express outrage over the alleged rape victims in Sweden.

Then there’s Bill Clinton, who has credibly been charged with multiple rapes of employees as governor of Arkansas, and feminists have been enablers and supporters of this alleged rapist. The biggest enabler was Democratic Party official Susan Estrich, who sold herself out as a woman and rape victim by enabling and supporting alleged rapist Clinton. There’s a bitter irony for both of them that Donald Trump has forcefully revived these charges of Clinton’s sexual assaults.

Then there was the Duke lacrosse team that was accused of mass rapes in 2007. The District attorney Mike Nifong kept pursuing the rape charges even when he knew they were false. The NY Times kept repeating the accusations even when the reporters knew the accusations were false. (From 2007: “Collapse of Duke rape case represents cultural change”)

Hysterical rape accusations pour out of the Obama administration, as they claim that 25% of all college girls are raped in college. The actual figure is around 0.1%. The administration claim is a hysterical lie.

So now we have this bizarre report where 1,000 young intoxicated men of “Arab or North African” appearance have sexually assaulted dozens of women on New Year’s Eve. Does this seem credible to you, Dear Reader, or does it sound like the Salem Witch Trials of 1692? I’m waiting to see the evidence before reaching my own conclusion. Deutsche Welle and Eyewitness To History and Minding the Campus

The mayor of Cologne Germany, Henriette Reker, reacted to the reports of the New Year’s Eve sexual assaults by advising women to protect themselves with a Code of Conduct.

Mayor Reker said it was “unbelievable and intolerable what happened on New Year’s Eve” but there was no reason to believe those involved in the attacks were refugees.

The Code of Conduct included the following advice:

Henriette Reker has received a huge amount of derision from Twitter users, who employed the hashtag #einarmlänge, which means “an arm’s length.”

Reker says that a complete Code of Conduct will be posted online soon. Deutsche Welle and CNN

The pendulum swings back on gender issues

When there are stories that Boko Haram or ISIS commit mass rape on girls in villages they capture, the news analyses portray these as unique to Muslim terrorists, but nothing could be farther from the truth.

During a generational crisis war, when battles become completely chaotic, massacres occur and discipline breaks down, a soldier who is covered with mud and the blood of his comrades who had been killed by the enemy would not be likely to resist the temptation to rape a young girl whose brother, uncle or father had participated in killing the soldier’s comrades. Rape would be both a sexual act and an act of revenge.

At the end of World War II, the Soviet army allegedly committed millions of rapes of German women. According to a German historian, 1.6 million American troops in Germany raped 190,000 German women within ten years after the end of the war. There have also been charges of mass rapes by American soldiers in France.

So it’s not surprising that protecting women from rape became a big part of the European and American culture at the end of the war.

Henriette Reker’s Code of Conduct was just the beginning. Women were advised to wear girdles, and men and women were separated in many environments.

When the 1960s generational Awakening era arrived, nobody wanted to talk about rape during WW II, so Boomers were literally completely unaware of it. They regarded such “Codes of Conduct” as unnecessary, and feminists blamed them on men’s relentless of oppression of women, supposedly demanding that women remain in the kitchen, barefoot and pregnant, whatever that means.

So the 1960s launched a pendulum swing towards greater sexual freedom for women — bra-burning, miniskirts, hot pants and free sex.

Today, we’re in a new generational Crisis era. We’re seeing the first sign of mass rapes again, whether in Syria or Nigeria. And now we have these charges of mass sexual assaults in Germany on New Year’s Eve which, as I said, would be a major geopolitical issue if true. This is resulting in a swing of the pendulum back towards greater protection of girls and women, and Reker’s Code of Conduct is just one sign of it.

Actually, this has been going on for a while. In 2004 I wrote “‘It’s going to be the 1950s all over again'”, quoting feminist professor, Linda Hirshman, who found that 85% of high-powered married women she interviewed were staying at home to take care of the kids.

The events of the world today are increasingly showing how vulnerable women are to rape and sexual assault. Like it or not, this is part of human nature, and as I said the human race would not have survived if it didn’t happen. As world chaos increases, more measures will be put into effect to protect women, and more Codes of Conduct will be published. Der Spiegel and Pew Research

China’s Shanghai Stock Market index fell over 7% in the first half hour of trading on Thursday morning, triggering circuit breakers that ended trading for the rest of the day, for the second time this week. This occurred despite massive influxes of money into the banking system by the People’s Bank of China (PBOC) to allow large companies to purchase stocks. As usual, China has already issued regulations that prevent many stocks from being traded, and that provide that any bloggers who use words like “stock market slump” should be arrested and hung in a cell by his ankles. Such is the Chinese way.

China’s stock market is in a huge collapsing bubble, and whether the PBOC can find a way to slow down the implosion remains to be seen.

As regular readers know, Generational Dynamics predicts a major global financial panic and crash. It’s possible that things will settle down in a few days, or it’s possible that the predicted crash is now beginning. We won’t know for sure for a while yet, but in the meantime, investors are advised to stay out of the stock market. Bloomberg

Today (January 7) is Christmas for the Russian Orthodox church and many other Orthodox Christian Churches (though not the Greek Orthodox Church, which celebrates Christmas on December 25). Russia Today