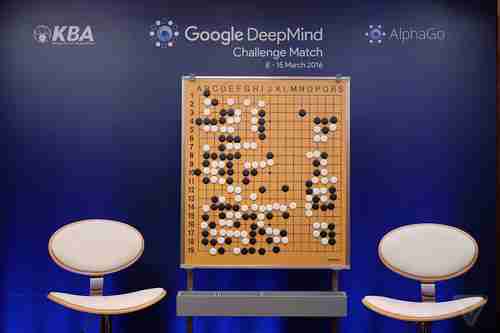 World Go champion Lee Se-dol was forced to resign the third game of a five-game match against Google’s AlphaGo computer and software in Seoul on Saturday, handing the victory for the whole match to the computer. As I wrote several weeks ago, this victory by a computer at the game of Go is a significant step on the road to the Singularity, the point in time where computers become more intelligent than humans, with an uncertain future for humanity. ( “28-Jan-16 World View — China’s game of Go beaten by Google’s AI software, bringing the Singularity closer”)

The reason that this is a very big deal is because artificial intelligence (AI) experts had not expected to reach this milestone for another ten years. This means that those researchers that had estimated that the Singularity would not occur until 2040 or 2050 now have to recalibrate their timelines. My own estimate of 2030, which I originally published in 2005, still stands, and increasingly appears to be the best estimate.

World Go champion Lee Se-dol apologized for losing to the computer, and responded to questions about whether computers are already smarter than humans:

I don’t know how to start or what to say today, but I think I would have to express my apologies first. I should have shown a better result, a better outcome, and better content in terms of the game played, and I do apologize for not being able to satisfy a lot of people’s expectations. I kind of felt powerless. If I look back on the three games, the first one, even if I were to go back and redo the first game, I think that I would not have been able to win, because I at that time misjudged the capabilities of AlphaGo. The second game, I think, would have been the make or break.

If you look at the beginning of the second game, the game did flow the way that I have intended, and there were a [number of opportunities] which I admittedly missed. Looking at the third match, yes, I do have extensive experience in terms of playing the game of Go, but there was never a case as this as such that I felt this amount of pressure. So I was incapable of overcoming the amount of pressure that I was experiencing.

And lastly, since I lost the third match, there is now a clear winner. However, when it comes to human beings, there is a psychological aspect that one has to also think about. So as I play the fourth and fifth match, I do ask that you continue to show interest and follow what happens. […]

I do apologize for not being able to satisfy people’s expectations. Lee Se-dol is the one who lost today, not humanity.

If Lee were able to win at least one of the two remaining games, then it would be significant because it would show that computers still have plenty of room for improvement.

However, even if Lee won both of the two remaining games, it would still be a Pyrrhic victory. Computers have been doubling in power every 18 months or so, and will continue to do so. Software engineers will continue to take advantage of this computer power to write more and more sophisticated brute force algorithms and solve larger and larger pieces of human intelligence, until finally all of human intelligence can be surpassed. Korea Times and Venture Beat and The Verge

Despite rapid growth of ISIS in Libya, West cannot agree on a strategy

Any thought of a Western military action to destroy the so-called Islamic State (IS or ISIS or ISIL or Daesh), as has been in the planning stages for several months, has been put on indefinite hold because the two governments in Libya are unable to form a single “unity government,” or Government of National Accord (GNA), that would approve the intervention.

This is despite the fact that there are now 5,000 ISIS fighters in Libya, according to Italy’s foreign minister Paolo Gentiloni:

According to our analyses, there are today around 5,000 Daesh fighters in Libya.

They are concentrated particularly in the area of (the city of) Sirte but from there they have the capacity to carry out dangerous incursions (into neighboring states).

These remarks followed a terrorist attack on Monday on an army barracks and police and national guard posts Tunisian town of Ben Guerdane on the border with Libya. Tunisia is blaming ISIS for the attack, and says that their security forces have killed 43 suspected jihadists since the attack.

According to a United Nations report, the political and security vacuum in Libya is being exploited by ISIS, which has “significantly expanded” the territory it controls. While ISIS has not been able to exploit oil installations in Libya for revenue, many young jihadists from around the world who had been going to Syria to fight are now going to Libya for training in terrorist skills.

Some analysts have advocated, in lieu of a Western military intervention, supplying weapons to non-ISIS militias in Libya that are fighting ISIS. According to one analyst:

In Libya there are many such forces who oppose ISIS, but these forces and a coalition of convenience can be made, and the Libyan nation can be rebuilt by bringing together these main fighting forces to work together against ISIS.

However, Ibrahim Al Dabashi, Libyan Ambassador to the UN, opposes such a plan:

I would like to warn against any attempt to bolster the capabilities of Libyan militias based on the assumption that, if equipped, they will fight ISIS in Sirte… Such an attempt would [would only lead to] more complications of the Libyan crisis.

The fear is that once the military intervention ended, ISIS could quickly regain control in Sirte, and the militias that had been fighting ISIS would use the weapons to fight each other.

The West’s last military intervention in Libya is being widely described today as a disaster. This is the nature of politics. But at the time of the 2011 intervention, a major refugee crisis had already begun in Tunisia and Libya, with hundreds of thousands of people pouring into neighboring countries, and thousands crossing the Mediterranean to Italy. It was this refugee crisis that caused Libyans to demand a no-fly zone, and for the Arab League to do the same, after which the UN Security Council passed a resolution authorizing a no-fly zone, which turned into the 2011 military intervention. ( “5-Mar-16 World View — A look back at Libya in 2011 as the West debates another military intervention”)

Nobody seems to doubt that ISIS is rapidly getting stronger in Libya, and no analyst that I’ve seen claims that doing nothing will lead anywhere except to a crisis. But after the 2011 experience, the West is paralyzed. It seems fairly likely that a military intervention will be taken at some point, but only when the crisis becomes so great that it’s a full scale emergency, and intervention cannot be avoided. UN Security Council and AFP and VOA