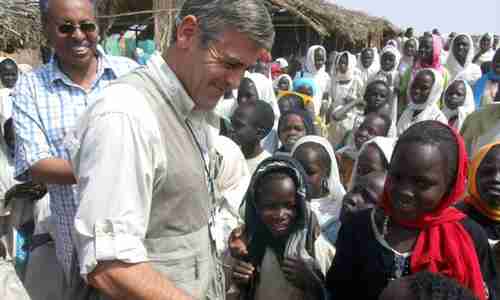 The ongoing genocidal massacre in Darfur, the far western province of Sudan, is almost completely forgotten today in the West, and is no longer as chic and high fashion an issue as it was ten years ago.

Ten years ago, politicians and celebrity stars, led by George Clooney, were anxious to appear on the evening news shows to demonstrate what caring and concerned people they were, and to suggest some politically correct way to end the genocide. Running for the president in 2008, Barack Obama declared that Darfur was a “stain on our souls,” and that “as a president of the United States I don’t intend to abandon people or turn a blind eye to slaughter.”

Well, he abandoned them. The celebrities and politicians are now long gone, having done nothing for the people of Darfur.

In 2007, the a UN Security Council resolution established the United Nations–African Union Mission in Darfur (UNAMID), and provided peacekeeping troops to protect the Darfurians. Millions of people who were threatened with violence were moved from their villages to camps for refugees and IDPs (internally displaced persons) controlled by UNAMID. Today, there are still more than 3.1 million IDPs living in these refugee camps, and they are still suffering from hunger, thirst, and attacks from the militias that were attacking them ten years ago.

Sudan’s president Omar Hassan Ahmed al-Bashir is blamed for the ongoing genocide, and for launching the Janjaweed Militias that perpetrated the actual massacres. In March 2009, the International Criminal Court (ICC) issued an arrest warrant for al-Bashir, charging him with war crimes, crimes against humanity and genocide. Since then, al-Bashir has very carefully avoided traveling to any country where the government might take him into custody and send him off to the ICC to be tried, and he’s still considered to be an international fugitive.

And so he considers the UNAMID refugee camps, which are at least partially protected by 19,000 UN peacekeeping troops, to be a personal humiliation and a humiliation for the government of Sudan, because they stand as a permanent monument to the genocide and other war crimes of which he is accused. For those reasons, al-Bashir has wanted for a long time to close the refugee camps.

On Wednesday, at a major celebration in Sudan’s capital city Khartoum, al-Bashir declared the Darfur war to be over. He said that the country was now at peace, and that the UNAMID camps are to be closed by the end of the year. The 3.1 million people in these camps can return to their original villages, though Sudan may set up some non-UNAMID refugee camps for the others. In either case, there will be no peacekeeping troops to protect them from the Janjaweed militias.

Meanwhile, fighting is still going on, though not at previous levels. The Janjaweed militias have been renamed as the Rapid Support Force (RSF), but their actions haven’t changed, and 3.1 million people are now threatened with renewed massacres from the militias controlled Omar al-Bashir’s militias. AFP and Kigali (Rwanda) Today and Deutsche Welle and Sudan Tribune

Generational history of the Darfur war 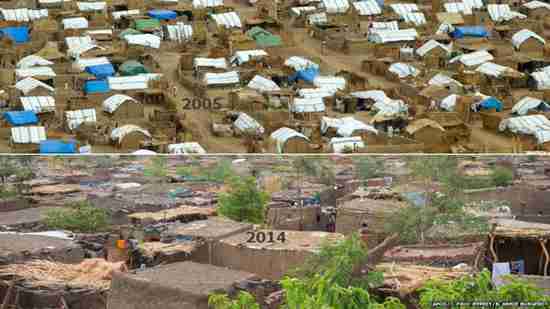 Darfur refugee camp – changes from 2005 to 2014. Tarpaulin roofs have been covered with mud bricks as homes have morphed into permanent settlements, packed between narrow alleys. (BBC)

The core issue in the Darfur war is one that I’ve described many times: the battle between farmers and herders. Farmers and herders have two completely different lifestyles, and in many countries they come from two completely different ethnic groups. Battles between farmers and herders occur in country after country, as I’ve described many times in Central African Republic, Rwanda, Burundi, Kenya, Sudan, and even America in the 1800s. The farmers accuse the herders of letting the cattle eat their crops, while the herders accuse the farmers of planting on land that’s meant for grazing. If the farmers put up fences, then the herders knock them down.

In Sudan, low level violence began in the 1970s between two ethnic groups, one of farmers (the “Africans”) and the other of camel herders (the “Arabs”), in the usual disputes over land and water. The violence increased from year to year, and in the 1990s, Sudan’s government in Khartoum delegated the responsibility of policing the region to the Arab Janjaweed militias, formed from certain groups of herders.

Violence continued to increase, and by 2003, it had turned into a full-scale generational crisis war. That was the time when the world began to pay attention.

That was only nine years after the Rwanda genocide of 1994, involving the slaughter of some 800,000 ethnic Tutsis by ethnic Hutus, in a three month period. There had been years of finger-pointing among politicians for “allowing” the Rwanda genocide to occur, while doing nothing to stop it.

So by 2004, it had become an international cause to prevent a new “Rwanda genocide” from occurring in Darfur. There were international calls to do something, although any such actions were opposed by the Arab nations in Africa — Libya, Sudan, Egypt, Nigeria and Chad.

The crisis was all the rage among the glitterati and the hoi polloi. George Clooney visited Darfur, raised money, addressed the UN, and got other celebrities to speak out about the atrocities. In 2004, Jesse Jackson called for sending American troops to Darfur. In 2007, Senator Joe Biden called for withdrawing all the American troops from Iraq and sending them to Darfur. Ban Ki-moon blamed the United States and the West for the genocide in Darfur, by saying that it was caused by global warming.

From the point of view of Generational Dynamics, something important has been missing from the Darfur crisis, and until that missing piece emerges, the crisis will continue unabated.

The missing piece is the “explosive climax.” Every generational crisis war has to end with an explosive climax, or the war won’t end. Sometimes the explosive climax is literally “explosive,” as in the nuking of Japanese cities at the end of World War II. In other cases, it is a massacre and atrocity so horrific that it is well-remembered for decades or even centuries. The Rwanda genocide was such an explosive crisis. So was the massive slaughter of tens of thousands of Sunnis from the town of Hama, Syria, in 1982, when Hafez al-Assad turned the town to rubble.

In the case of Darfur, when I was writing about it ten years ago, I was expecting this explosive climax to occur at any time. But it didn’t happen because of the massive peacekeeping operation by UNAMID, starting in 2007, with millions of people moved into peacekeeping camps where they could be “protected.”

Although we don’t know WHEN the climax will occur, we can take a pretty good guess about HOW it will occur. You have those 3.1 million IDPs like sitting ducks in refugee camps, protected by 19,000 UN troops. One day those troops will be removed, whether or not the refugee camps are closed. Either way, that will clear the path for the Janjaweed militias to finish the job they started. That will be the explosive climax. Sudan Tribune and Guardian (London, 11-Dec-2014) and BBC (11-Aug-2014) and Martin Plaut (6-Jan)