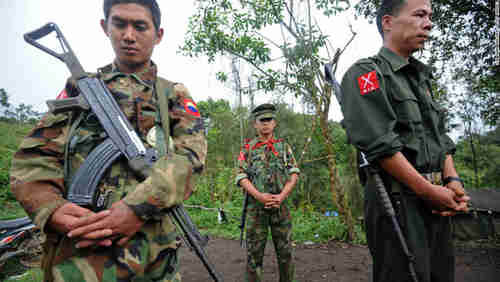 In October of last year, the government of Myanmar (Burma) concluded a peace agreement with its armed ethnic groups that had been under negotiation since 2011. According to the government rhetoric, the agreement was “bringing hope” that the entire country would soon be “at peace.”

However, of the 15 armed ethnic groups in Burma, only eight attended the lavish signing ceremony and signed the agreement. The others indicated that they wished to continue fighting Burma’s army.

Now three of the non-signers have launched a series of violent attacks on military outposts and police stations across the northern part of the country. Hundreds of people have been forced to flee their homes, some crossing the border into China. The groups are:

The conflicts have resulted in a central part of the country dominated by the majority Burmese, surrounded by various ethnic minority populations who form the majority in their own areas. Most of Myanmar’s ethnic groups are now concentrated within particular regions corresponding more or less to the states named after the seven ethnic nationalities: Karen, Kachin, Mon, Arakanese, Karenni, Chin and Shan.

China’s defense ministry issued a statement saying, “The Chinese army is on high alert and will take the necessary measures to safeguard the country’s sovereignty and safety, as well as protect the lives and property of Chinese citizens living along the border.”

China has not intervened in the Burma conflicts, but might do so if Chinese citizens, in either Burma or China, were threatened. There have at least nine deaths and dozens of wounded.

Following World War II, Burma experienced a series of extremely bloody crisis civil wars that only climaxed in 1958 when the army took over power. There has been sporadic fighting among these groups in the decades since then, but nothing that has escalated into a major war.

As we recently reported, Burma’s army is conducting a scorched earth attack on Rohingya Muslims in Rakhine state. As of a week ago, over 430 buildings had been burned down. Now, Human Rights Watch has released new satellite photos showing that 1,000 homes have been burned down, almost all in Rohingya villages, many of which no longer exist. Dozens of people have been killed, and at least 300,000 people have been forced to leave their homes, with many fleeing into Bangladesh. Witnesses and alleged victims also accused soldiers of widespread rape.

Burma’s government has completely closed off the entire region, refusing to allow reporters or investigators to see for themselves what has happened. Furthermore, the government is saying that thousands of Rohingyas have burned down their own homes. I must admit, Dear Reader, that hearing crap like this from government officials really infuriates me. But it’s what we’ve come to expect from leaders like Bashar al-Assad, Vladimir Putin, Robert Mugabe, and Pierre Nkurunziza. AFP and BBC and Deutsche Welle