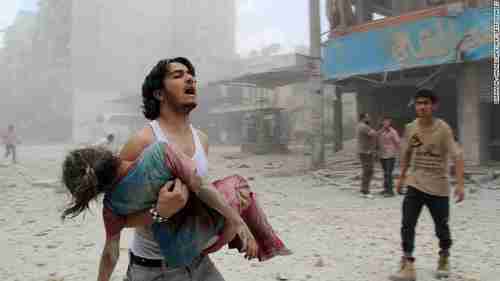 Wednesday was another day of a great deal of bloody violence across Syria, at a time when there is supposed to be a ceasefire in effect and peace talks in process.

A suicide bomber blew himself up at old Justice Palace building, Syria’s central court, in the heart of Damascus. The terrorist, who was dressed in a military uniform and was carrying a gun and a grenade, was stopped by the guards at the external door of the old Justice Palace building. After he handed over his gun and grenade to the guards as he was told to do, he ran quickly towards the door of the lobby of the Justice Palace, where there was a large were a large group of people, and blew himself up. At least 32 people were killed and 100 wounded.

An hour later, another suicide bomber struck at a restaurant on the outskirts of Damascus, killing a large number of civilians, mostly women and children.

Nobody has taken credit for the latest terror attacks in Damascus on Wednesday. LLC issued a statement denying responsibility for Wednesday’s attacks, saying that its targets are restricted to security and military installations, but that’s obviously a lie since Saturday’s attack was on innocent Shia pilgrims visiting a cemetary.

A delusional Syrian official said that “the terrorist bombings reflect the state of collapse within the ranks of the terrorist organizations as a result of the resilience of the Syrian people and the victories of the Syrian Arab Army and its allies.” He added that Saudi Arabia, Qatar and Turkey are to blame for the terror attacks.

According to Democratic Senator Tim Kaine on Wednesday:

The Syrian civil war — one of the world’s worst humanitarian crises since World War II — continues to be the most dangerous and destabilizing conflict in the Middle East today.

Six years in, Assad has created a safe haven for ISIS and Al-Qaeda, while he commits unspeakable acts of violence against his own people.

In other ceasefire activity, 21 people were killed in Idlib by Syrian and/or Russian warplanes.

SANA (Damascus) and SFGate and AFP

As we’ve been reporting, American troops have been deployed to the Syrian city of Manbij to keep the Sunni rebels loyal to Turkey and the Kurdish militias, both allies of the United States, from killing each other.

A plan to deploy an additional 1,000 ground troops to northern Syria is awaiting approval by Defense Secretary Jim Mattis and President Trump. The additional troops will be used for the operation in Raqqa, considered to be the capital city of the so-called Islamic State (IS or ISIS or ISIL or Daesh). AFP and Military Times and Washington Post

Syria’s Bashar al-Assad says that the Americans are invaders

In an interview with Hong Kong-based Phoenix TV, Syria’s president Bashar al-Assad said that the American troops are invaders:

Question 8: Now, US troops are in Manbij. Is the greenlight from your side? Did you open the door for these American troops?

President Assad: No, no, we didn’t. Any foreign troops coming to Syria without our invitation or consultation or permission, they are invaders, whether they are American, Turkish, or any other one. And we don’t think this is going to help. What are they going to do? To fight ISIS? The Americans lost nearly every war. They lost in Iraq, they had to withdraw at the end. Even in Somalia, let alone Vietnam in the past and Afghanistan, your neighboring country. They didn’t succeed anywhere they sent troops, they only create a mess; they are very good in creating problems and destroying, but they are very bad in finding solutions.”

In the same interview, al-Assad was also asked how long the war would last, and he gave a totally delusional answer:

Question 14: “How many days do you think this war is going to last?”

President Assad: “If we presume that you don’t have foreign intervention, it will take a few months. It’s not very complicated internally. The complexity of this war is the foreign intervention. This is the problem. So, in the face of that intervention, the good thing that we gained during the war is the unity of the society. At the very beginning, the vision for many Syrians wasn’t very clear about what’s happening. Many believed the propaganda of the West about the reality, about the real story, that this is against the oppression. If it’s against the oppression, why the people in Saudi Arabia didn’t revolt, for example? So, now what we gained is this, this is our strongest foundation to end that war. We always have hope that this year is going to be the last year. But at the end, this is war and you can’t expect what is going to happen precisely.”

So it’s good to remember how we got here. The civil war in Syria was caused by al-Assad when he unleashed his army and air force against peaceful protesters in 2011. Up to that point, Turkey and Saudi Arabia were friendly with al-Assad. Things really turned around in August 2011, when al-Assad launched a massive military assault on a large, peaceful Palestinian refugee camp in Latakia, filled with tens of thousands of women and children Palestinians.

Al-Assad’s unprovoked attack on this refugee camp, and the slaughter of thousands of Palestinian women and children, drew young jihadists from around the world to Syria to fight al-Assad, resulting in the formation of the so-called Islamic State (IS or ISIS or ISIL or Daesh). Sunnis in Syria itself turned against al-Assad, forming either “moderate” rebel militias or joining the jihadist Al-Nusra Front, which is now the Levant Liberation Committee (LLC). Al-Assad is responsible for displacing millions of Syrians, including over a million that have flowed into Europe as refugees.

There is zero probability that the Syrian civil war will end as long as al-Assad is in power. Generational Dynamics predicts that the Mideast is headed for a major regional war, pitting Jews against Arabs, Sunnis against Shias, and various ethnic groups against each other. SANA (Damascus)