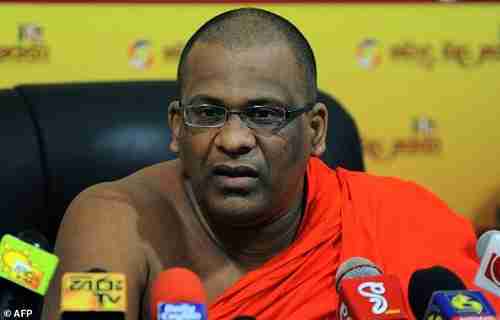 Police in Colombo, the capital city of Sri Lanka, on Sunday arrested five people for instigating religious violence that has led to a series of violent attacks on Muslims since April. Four of the people were Buddhists instigating violence against Muslims, while the fifth was a Muslim accused of defaming Buddhism.

More than 20 hate crime attacks on Muslims have been recorded since April 17, including arson at Muslim-owned businesses and petrol-bomb attacks on mosques. The attacks are being blamed on a radical nationalist Buddhist organization, Bodu Bala Sena (BBS – Forces of Buddhist Power) that has been conducting violent attacks on Muslim targets since 2014.

However, only one of the five arrested men is connected to BBS, an unidentified 32-year-old man directly linked to at least four arson attacks in a Colombo suburb. The Colombo police are being heavily criticized because they have been unable or unwilling to arrest the BBS leader, the Buddhist monk Galagoda Aththe Gnanasara, and many people believe that the Buddhist Sinhalese government is protecting Gnanasara, despite his connection to violence against Muslims.

For 30 years, Sri Lanka’s entire society has been dominated by the Sri Lankan civil war between the ethnic majority (Buddhist) Sinhalese and the ethnic minority (Hindu) Tamils. This civil war climaxed in May 2009, following reports of genocide on both sides, when the separatist Tamil Tigers surrendered and renounced further violence, ending the Sri Lanka crisis civil war.

Every generational crisis civil war follows the same general pattern. The war climaxes and ends with genocidal acts on both sides that are so horrible that the traumatized survivors vow to do everything possible to prevent it from happening again. And they succeed, and a new civil war only begins decades later when the survivors finally die off. But during those decades, younger generations, with no personal memories of the horrors of the war, come of age and begin protests that sometimes become violent.

The protests start to become widespread during the generational Awakening era, which begins about 15-18 years after the climax of the crisis war, and is characterized by protests, sometimes violent, by college students.

Although it has only been 8 years since the climax of the Sri Lanka civil war, we are beginning to see the first signs of the violence that will become widespread in a few years. However, in this case, there is a twist.

The Sri Lankan civil war was fought between the Buddhist Sinhalese and the Hindu Tamils. The small Muslim community was not really involved, and according to some reports, they thrived and prospered during the war, while the other two groups were out killing each other.

The Bodu Bala Sena (BBS) or “Buddhist Power Force” group was formed in 2012 to purify Sri Lanka for the Buddhists by exterminating the Christians, Hindus, and Muslims. However, they have been particularly focusing on Muslims.

The leader of BBS is the Buddhist monk Galagoda Aththe Gnanasara. In 2014, a video showed Gnanasara delivering an explosive hate speech to large crowds of Buddhists, full of vicious rhetoric. He pointed out that the Sri Lankan police and army are Sinhalese, and therefore are on the side of the Sinhalese, and he screamed explicit threats to Muslims, including using derogatory language. To roars of approval from the crowd, he vows that if any Muslim, were to lay a hand on a Sinhalese, that would “be the end” of all of them.

Gnanasara’s speech triggered a sectarian bloodbath in the town of Aluthgama. Shortly after the speech, Buddhist mobs marched through Muslim neighborhoods, ransacking dozens of homes and shops. Three Muslim men were killed, and sixteen seriously injured in the two nights of violence that followed.

Despite his incitement to riot, Gnanasara claims that he and the BBS had nothing to do with the Aluthgama bloodbath. Now there have been at least sixteen major incidents since April 17 of this year. Once again, Gnanasara claims that he and the BBS have nothing to do with them. Nonetheless, Gnanasara remains in hiding, and the police are either unable or unwilling to arrest him. Daily Mirror (Colombo) and CNN (17-July-2014) and LankaWeb and The Island (Sri Lanka)