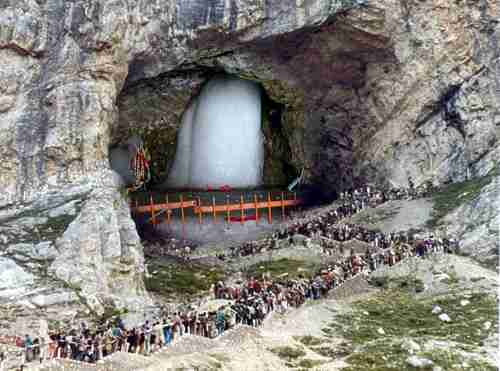 Long lines of pilgrims visiting the Amarnath shrine in 2016. Inside the 40 m (130 ft) high cave, water drops from melting snow fall from the roof of the cave to the floor, creating a stalagmite that grows upward.

Thousands of people have fled their homes in the Pakistan side of the Line of Control (LoC) in Kashmir and Jammu, because of continued shelling across the LoC between India and Pakistan. About 80 percent of four villages along the LoC have fled.

On Monday, India was shocked after Kashmiri militants killed seven Hindu pilgrims traveling by bus to Hindu’s holiest shrine, the Amarnath Temple. Each year, over 200,000 people make the Amarnath Yatra (pilgrimage) to the shrine, at an altitude of 3,888 meters. Terror attacks on the pilgrims have been extremely rare because both Hindus and Muslims respect the shrine.

Security personnel are expecting more violence tomorrow (Wednesday), when Kashmiri Muslims mark “Kashmir Martyrs’ Day,” the anniversary of July 13, 1931, when dozens of Muslims were killed in a confrontation with British security forces.

Although there have been continuing clashes between Kashmiris and Indian security forces, so far there has not been the explosion that some people have feared this summer, and many people are hoping that things will remain steady until winter comes and brings respite from the violence for another season.

Indian security forces have come under harsh criticism for failing to control the violence in the past year, and also for using pellet guns that blinded hundreds of people. In February of this year, the police tried a new policy – meeting the parents of potential militants in the hope of gaining their cooperation in convincing these young people that violence is not the right path. At that time, an estimated 80 youths were believed to have joined militant outfits.

The plan was announced by Kashmir’s Director General of Police (DGP) Shesh Paul Vaid, who said:

We won’t like to harm our own children. We are reaching out to the parents and requesting them to convince their children for shunning the path of violence. In few cases, we have achieved success also. We want that our children should fight in debates, competitive exams and not with guns.

I have made appeals through my district Superintendents of Police and conveyed that all missing cases need to be verified on ground and corrective steps to be taken. Our first attempt is always humanitarian so that we can bring misguided children back. We have given an assurance that a lenient view will be taken in case the youths surrender voluntarily.

This approach appeared promising, but it has not been particularly effective. Last month, India announced Operation All-Out, a massive police operation “to deliver a lethal blow to terrorism… with a long-term plan for a lasting peace in the trouble-torn Valley.” This was never going to work and encourages tit-for-tat violence.

As I’ve written several times, from the point of view of Generational Dynamics, Kashmir is replaying previous generations of violence according to a fairly standard template. India’s previous two generational crisis wars were India’s 1857 Rebellion, which pitted Hindu nationalists against British colonists, and the 1947 Partition War, one of the bloodiest wars of the 20th century, pitting Hindus versus Muslims, when the British colonists partitioned the Indian subcontinent into India and Pakistan. Kashmir is at the heart of a re-fighting of those two wars, and there is nothing that the Indian security forces can do to prevent it. AFP and Washington Post and South Asia Terrorism Portal (SATP – India) Times of India

China threatens military intervention in Kashmir on the side of Pakistan

We have been reporting a standoff between India’s army and China’s army on Doklam plateau in the tiny country of Bhutan. China is attempting to annex the region, and on June 16 sent Chinese troops and construction workers to begin road construction. Bhutan troops tried to prevent the Chinese troop incursion, but they were overrun. Bhutan invoked a treaty with India and asked for help. India sent in its own troops, creating a standoff, though no bullets have been fired. Neither the Chinese nor the Indians appear ready to back down.

A Chinese official, Long Xingchun, is threatening to use the situation on the Doklam plateau as justification for China to invade Kashmir on the side of Pakistan:

Indian troops invaded China’s Doklam area in the name of helping Bhutan, but in fact the invasion was intended to help India by making use of Bhutan…

India controls Bhutan’s defense and diplomacy, seriously violating Bhutan’s sovereignty and national interests. Indians have migrated in large numbers to Nepal and Bhutan, interfering with Nepal’s internal affairs. The first challenge for Nepal and Bhutan is to avoid becoming a state of India, like Sikkim…

Even if India were requested to defend Bhutan’s territory, this could only be limited to its established territory, not the disputed area. Otherwise, under India’s logic, if the Pakistani government requests, a third country’s army can enter the area disputed by India and Pakistan, including India-controlled Kashmir.

At this point, we have to remind readers that China is an international criminal, annexing the territories of other countries in the South China Sea, and building illegal military bases, in violation of international law as determined by a 2016 ruling by the United Nations Permanent Court of Arbitration (PCA) in the Hague, which declared China’s activities in the South China Sea to be illegal. China has used extortion and military force against some Central Asian countries to annex territories. China had apparently hoped to bully Bhutan to give up its territory without a fight, and is now furious that India is defending Bhutan’s territory.