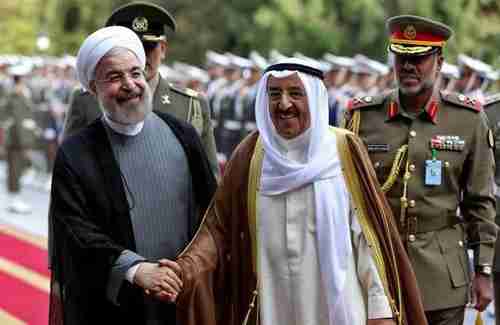 Kuwait on Thursday expelled fifteen Iranian diplomats and ordered the closure of several Iranian embassy missions. It is unclear whether Iran’s ambassador, Alireza Enayati, was included in the expulsions.

The expulsions will further complicate the growing Arab crisis, where Saudi Arabia, United Arab Emirates (UAE), Bahrain, and Egypt are enforcing a land, sea, and air blockade of Qatar, because of Qatar’s alleged close relations with Iran. Kuwait has been trying to mediate among the parties and resolve the crisis, but that will presumably be more difficult now that Kuwait has expelled Iran’s diplomats.

The expulsion stems from the discovery in August 2015 of a large cache of weapons in a farm house in the village of al-Abdali, and the arrest of the three owners of the house. The three men were accused of being members Iran’s puppet terror regime Hezbollah, and of being part of what has been nicknamed the “Abdali terror cell.”

The cache of weapons was quite large and included a total of 19,000 kg of ammunition, 144 kg of explosives, 68 weapons, and 204 grenades. The farm house is near the border with Iraq, and Kuwait said that Hezbollah and Iran’s Islamic Revolution Guards Corps (IRGC) smuggled the weapons across the border from Iraq to be used in terror attacks against the Sunni Muslim government of Kuwait.

About twenty members of the Abdali terror cell were convicted on January 12, 2016, of working for Hezbollah and the IRGC, and of smuggling explosives from Iran. However, the appeals court reversed the conviction later in the year.

Finally, last month, on June 18, Kuwait’s supreme court, whose rulings are final, reversed the appeals court decision. The cell mastermind was sentenced to life in prison, while 20 other members of the cell, all Shia Muslims, were sentenced to between 5 and 15 years in prison.

Following the supreme court ruling on the case … the government of Kuwait has decided to take measures, in accordance with diplomatic norms and the Vienna Convention, towards its relations with the Islamic Republic of Iran.

Iran’s foreign ministry reacted angrily, saying that the accusations that it was behind a terrorist cell were baseless, and threatened revenge:

Iran’s strong objection has been communicated to Kuwait’s chargé d’affaires. It was reiterated that Iran reserves the right to a reciprocal measure.

It is regrettable that the Kuwaiti officials, are acting based on provocations raised by adventurist regional sides and are leveling accusations against Iran in the current sensitive conditions, instead of doing their best to reduce tensions.

However, not all of the convicts are in custody. A Kuwaiti newspaper on Monday reported that in the hours just after the Kuwait’s Supreme Court handed down its decision, 14 of the convicts fled to Iran. They used small speedboats to leave Qatar and reach international waters, where an Iranian vessel was waiting to pick them up. Al Jazeera (14-Aug-2015) and AFP and Ahlul Bayt (Iran) and Gulf News

Kamal Kharrazi, the head of Iran’s Strategic Council on Foreign Relations said on Friday that Iran was open to “dialogue” with Saudi Arabia despite escalating tensions. Kharrazi said:

We know they (the Saudis) have made many mistakes in Yemen, Bahrain, Iraq and Syria, but we are still for dialogue.

A laughable statement like that shows why a resolution to the Qatar blockade crisis is still very far away.

On June 5, four Arab countries – Saudi Arabia, United Arab Emirates (UAE), Bahrain and Egypt – imposed a land, sea, and air blockade on Qatar. The reasons given were Qatar’s support for Iran, Qatar’s support for the Muslim Brotherhood, which the four countries consider to be a terrorist group, and Qatar’s aggressive use of al-Jazeera to broadcast incitement to overthrow their governments.

The four countries listed 13 specific demands that would be necessary to resolve the crisis. The demands included: sever most ties with Iran; sever all ties to the Muslim Brotherhood; shut down al-Jazeera; terminate Turkey’s military presence in Qatar; pay reparations and compensation for loss of life and other, financial losses caused by Qatar’s policies in recent years. France 24

The perpetrators have undermined our sovereignty and independence by fabricating false statements to mislead international public opinion.

We are open to dialogue to resolve the outstanding problems [so long as Qatar’s] sovereignty is respected.

Saudi Arabia has always said that its thirteen demands were non-negotiable, but last week the Saudi-led coalition did appear to be softening its demands for resolving the crisis, when it announced that it was replacing the 13 specific demands with six broad principles. According to a Saudi analyst, “I don’t see this as a softening of the quartet’s position on Qatar per se, as much as a measure taken to restart the negotiation process. … These six principles are best viewed as an effort to set the foundation for meaningful negotiation process.”

The six principles are:

1. Commitment to combat extremism and terrorism in all its forms and to prevent their financing or the provision of safe havens.

2. Prohibiting all acts of incitement and all forms of expression which spread, incite, promote or justify hatred and violence.

3. Full commitment to Riyadh Agreement 2013 and the supplementary agreement and its executive mechanism for 2014 within the framework of the Gulf Cooperation Council (GCC) for Arab States.

4. Commitment to all the outcomes of the Arab-Islamic-US Summit held in Riyadh in May 2017.

5. To refrain from interfering in the internal affairs of States and from supporting illegal entities.

6. The responsibility of all States of international community to confront all forms of extremism and terrorism as a threat to international peace and security.

These extremely vague do provide a possible basis for compromise, but it is hard to see how anything will change in the long run. Qatar is going to continue to broadcast al-Jazeera, which is going to continue to air speakers from the Muslim Brotherhood, which Qatar supports, but which the four boycotting nations consider to be terrorists – terrorists who are on al-Jazeera advocating the overthrow of their governments. This is a core difference between Qatar and the four nations, and it will not be resolved. And if it is papered over, it will become an issue again soon. Al Jazeera (Qatar) and The National (UAE) and BBC