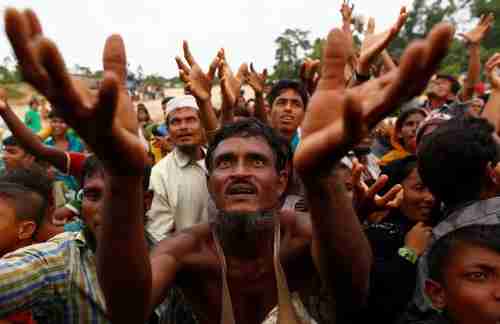 According to the United Nations, the Rohingya crisis in Burma (Myanmar) passed a major milestone on Thursday, in that the number of Rohingya Muslims fleeing to Bangladesh since August 25, when the latest Burmese army military “clearance operations” began, has now topped 500,000, making it “the largest mass refugee movement in the region in decades.” UN Secretary-General António Guterres called the crisis “the world’s fastest developing refugee emergency and a humanitarian and human rights nightmare.”

Counting the refugees who had fled earlier, there are now believed to be “well over 700,000” Rohingyas in Bangladesh. And since the systemic violence by Burma’s army is continuing there could be 250,000 more fleeing into Bangladesh in the next couple of months.

Burma’s government, led by the ethnic cleanser-in-chief and Nobel Peace Prize winner Aung San Suu Kyi, has been denying that any ethnic cleansing is taking place, and is making the laughable claim that Rohingyas are burning down their own villages and killing each other.

For years, as these military operations were taking place, Burma refused to allow any foreign investigators into Rakhine state. Journalists, NGOs, UN investigators have all be blocked by Burma from entering the region.

Burma has been internationally pressured to allow investigators in or risk losing aid or having sanctions applied. Finally, Burma agreed to a visit by United Nations officials and other diplomats to take play yesterday (Thursday). At the last minute, Burma canceled the visit, refusing to give any explanation, but several hours later said that it was “because of bad weather.” Burma claims that the visit will be rescheduled.

The visit was to have been tightly controlled, allowing the UN officials to see only the things that Burma’s army wanted them to see. However, that strategy failed disastrously this month, as we reported at the time. There was a tightly controlled visit by BBC reporter Jonathan Head, but then they happened to see some smoke going up through the trees. Head’s minders lost control as Head and his cameraman ran towards the fires, where they able to question a Buddhist Burman who admitted to burning down the buildings.

So after that experience, it is not surprising that the Burmese government canceled Thursday’s UN visit.

This is an extremely serious situation. The Burma Rohingya crisis is creating a huge refugee crisis and is energizing jihadist groups in Pakistan, Afghanistan, South Asia, and the Mideast. After several years of these atrocities by Burma’s army, Rohingya activists have formed the Arakan Rohingya Salvation Army (ARSA), which conducted terrorist attacks on August 25 and triggered the current round of “clearance operations” by Burma’s army. This crisis is extremely destabilizing to the entire region and is just as likely as the North Korea nuclear missile crisis to trigger a war that could escalate into a world war. AP and WHO – Bangladesh situation report and Independent (London)

The phrase “religion of peace” gets thrown around a lot these days. Every time there is a terrorist attack by a Muslim jihadist group, some Muslim leader insists that Islam is a “religion of peace,” a claim that infuriates many people in the West.

On the other hand, many people who comment on my articles seem to believe that Buddhism is a “religion of peace,” and claim that Buddhists are somehow congenitally unable to murder, rape, and torture Muslim Rohingyas or anyone else. A typical comment is that “Buddhists would never harm anyone, so the Rohingyas must have done something particularly harmful to deserve what’s happening to them.”

And so, many commenters seem to believe that Buddhism is a “religion of peace.” And yet, the Buddhist society of the Khmer Rouge in Cambodia in 1975-79, led by Pol Pot, perpetrated one of the three or four top mass genocides of the 20th century, comparable to the huge Christian genocides in Russia and Germany in the two world wars, or the huge Muslim genocides in the Mideast coming out of the collapse of the Ottoman empire, or the huge African genocides in the 60s and 70s, or the huge Chinese genocides in the 40s and 50s. Genocide and sex are driven by DNA, not by religion, and all religions have the same DNA.

The Buddhist Cambodian killing fields genocide, 1975-79, killed something like 1.7 to well over 2 million people, out of a population of 8 million. So around 20 percent of Cambodia’s population were killed, making it possibly the worst genocide, on a percentage basis, of the 20th century. By contrast, the Nazi Holocaust killed around 5 million, which was less than 3% of Germany’s population. Pol Pot was trying to imitate Mao Zedong’s Great Leap Forward in China, which was a genocide that killed millions of people out of some two billion. Mao Zedong and Pol Pot may be comparable in their genocides. In all cases, these millions of people were the subject of almost unimaginable atrocities, including torture and rape.

So now looking more closely at the Buddhist Cambodian Killing Fields genocide, it may well be that the Buddhists in Burma may be borrowing some techniques from their Buddhist cousins in the 1970s Khmer Rouge. This would be a historic example of one group of genocidal Buddhists learning genocide from another group of genocidal Buddhists. This comparison became even more dramatic on this week, when Burma’s government announced that the government will take over the land that contained the villages that Burma’s army burned down, making the ethnic cleansing permanent.

Right now, this is speculation, and there is no public evidence of this connection between the Buddhist cousins. Perhaps someday, when ethnic cleanser-in-chief and Nobel Peace Prize winner Aung San Suu Kyi writes her memoirs, we’ll learn more about whether there is a connection. UC Santa Barbara and Reuters and Al Arabiya