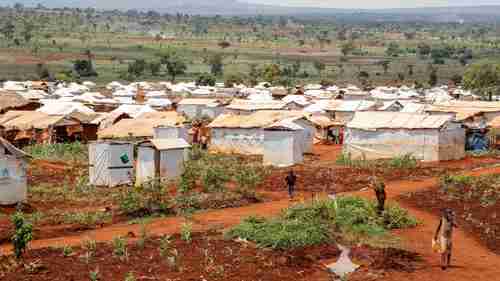 Nyarugusu refugee camp in Tanzania. Over 400,000 people have fled to other countries to escape the Burundi government violence (MSF)

Burundi on Friday completed its formal withdrawal from membership in the International Criminal Court (ICC), one year after the government informed the ICC that it would do so.

Burundi officials are saying that the reason for the withdrawal is that the court is racially biased against Africans since, of the 10 preliminary examinations that have proceeded to full investigations, nine have involved conflicts in Africa. But six of those nine cases were investigations requested by African nations, while two of them, Libya and Sudan (both considered to be Arab countries, but not Black African countries) were referred by the UN Security Council.

Both South Africa and The Gambia also filed plans last year to withdraw from the ICC, citing the same bias against Africa, but both countries later took back their withdrawals.

It is much more likely that the reason for Burundi’s withdrawal from the ICC is that one UN report after another has found that Burundi’s government, with Hutu president Pierre Nkurunziza, has repeatedly committed crimes against humanity, mostly against members of Tutsi tribe, the historic enemies of the Hutu tribe.

In 2016, there was an initial United Nations report on Burundi, based on interviews with more than 500 people among the over 500,000 who had fled the country from the violence. The violations included torture, rape, beatings, arbitrary jailings and summary executions. Nkurunziza’s reaction to that report was to ban the United Nations from Burundi, and to withdraw Burundi’s membership from the International Criminal Court (ICC).

The latest report, issued six weeks ago, focused on the Imbonerakure, the youth wing of Nkurunziza’s political party. The word Imbonerakure means “visionaries,” and for these kids, being “visionary” means raping women and beating people with iron bars. Reports in 2015 indicated that Nkurunziza’s police would select targets in the opposition, and would give kids in the Imbonerakure police uniforms, along with instructions to go to the homes of the targets, kill the men with iron bars, rape the women, and then kill the women and children.

Burundi officials were celebrating on Friday on the “great achievement” of withdrawing from the ICC.

Without any problem, in total peace and security, we have been able to leave ICC. Let’s rejoice!

The ICC has shown itself to be a political instrument and weapon used by the West to enslave [African states]. This is a great victory for Burundi because it has defended its sovereignty and national pride.

Members of Burundi’s government now believe that the countries war crimes and crimes against humanity are now beyond the reach of the ICC, but ICC officials disagree:

Burundi’s withdrawal does not affect the jurisdiction of the court with respect to crimes alleged to have been committed during the time it was a state party, namely up until 27 October 2017.

A spokesman for Amnesty International said:

The Burundian government has made a cynical attempt to evade justice by taking the unprecedented step of withdrawing from the ICC. But perpetrators, including members of the security forces, cannot so easily shirk their alleged responsibility for crimes under international law committed since 2015.

Overall, the violence in Burundi has claimed between 500 and 2,000 lives, according to differing tolls provided by the UN or NGOs and more than 400,000 Burundians have fled abroad. Iwacu (Burundi) and Standard Media (Kenya) and Amnesty International and Xinhua

Burundi to amend constitution to let Nkurunziza hold power until 2034

Now Nkurunziza plans to amend the constitution so that he can continue to hold power. Under the planned amendments, he will be able to hold power until 2034.

Burundi’s last generational Crisis war was the war the 1994 Rwanda genocide, in which Hutus tortured, raped and massacred Tutsis, killing over 800,000 in 100 days. Three countries, Rwanda, Burundi and Uganda, were all participants in the Hutu-Rwanda genocide. The Hutu and Tutsi tribes have been historic enemies for centuries, and have conducted extremely brutal wars with each other, the most well-known of which is the 1994 Rwanda genocide.

From the point of view of Generational Dynamics, we’ve seen this time after time, in Syria, Zimbabwe, South Sudan, Burundi, Thailand, Uganda, Democratic Republic of Congo, Cameroon, Eritrea, and other countries, where leaders in generational Awakening and Unraveling eras use arbitrary jailings, violence, and atrocities to keep the opposition ethnic group out of power. Over a period of years, the violence worsens until it turns into a full-scale generational crisis civil war when the next generational crisis era arrives.

The leaders of all three countries involved in the 1994 genocide are using force and violence to remain in power. Uganda’s president Yoweri Museveni, 73 years old, allied with the Tutsis, took part in many of these gruesome atrocities and slaughter. The current president of Rwanda is Paul Kagame, a Tutsi, also taking extraordinary measures to stay in power.

President Pierre Nkurunziza was not just a Hutu soldier in the 1994 Rwanda genocide. He was also a Hutu militia leader, and undoubtedly was responsible for many atrocities against Tutsis during the massive slaughter of Tutsis. So from the point of view of Tutsis, you have a hated Hutu militia leader responsible for atrocities and slaughter of Tutsis and, of course, they are going be furious and want revenge.

The people of Burundi finally settled the 1994 genocide in 2005, with all sides signing the “Arusha Accords” that set down rules for how the country would be governed. The Arusha Accords specified that a president could only hold power for two terms. They also specified that the constitution could not be amended.

So now a militia leader from a tribe of vicious war criminals, Pierre Nkurunziza, is using extreme violence to stay in power illegally, and prevent his political opponents, the Tutsis from taking power. This will not end well. Iwacu (Burundi) and AFP