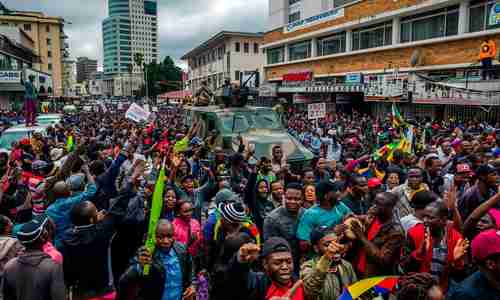 Up until a few days ago, anyone in Zimbabwe who criticized 93-year-old genocidal dictator Robert Mugabe risked being jailed and tortured. Mugabe’s wife, 52-year-old Grace Ntombizodwa Mugabe, said this year that Mugabe would continue governing from the grave:

One day when God decides that Mugabe dies, we will have his corpse appear as a candidate on the ballot paper.

You will see people voting for Mugabe as a corpse. I am seriously telling you — just to show people how people love their president.

That is why everyone, including foreign reporters, were shocked and thrilled to see tens of thousands of people cheering ecstatically on Saturday and marching in the capital city Harare, carrying banners that read “Mugabe must go!” and “Leadership is not sexually transmitted” – the latter an allusion to the attempt by Grace Mugabe to succeed her husband as president. Another sign read, “Mugabe must rest now!” alluding to the fact that Mugabe falls asleep during meetings.

On Wednesday, Zimbabwe’s army took control of the government after arresting Mugabe and confining him to his home. In addition, the army arrested a number of other ministers who are supporting Mugabe.

However, the army is insisting that this is not a “coup.” The reason is that the African Union is compelled by its constitution to intervene if a coup takes place.

Alpha Conde, who is Guinea’s president and is also president of the African Union said on Thursday:

We know there are internal problems. They need to be resolved politically by the Zanu-PF party and not with an intervention by the army.

The Southern Africa Democratic Development Community (SADC) would also have to take action in case of a coup, and so is insisting that it’s an internal government matter.

Thus, it is essential to the army that Mugabe be replaced by means of a constitutional transition of power. This requires that Mugabe step down voluntarily. However, Mugabe is not playing along. He says that he plans to remain in office and die in office. So the army is resorting to a kind of “plan B” to convince Mugabe to step down. The first step was to encourage people to come to Harare on Saturday with anti-Mugabe protests and demand that he step down, although, with the streets flooded with singing and dancing people on Saturday, it is clear that they did not need much encouragement.

For the next step in the plan, on Sunday, Mugabe will be fired as leader of the government party, Zanu-Pf, though he will still be president of the country. In addition, his wife Grace will be fired as head of the Zanu-Pf Women’s League. At this point, the plan is that Mugabe will no longer have any friends, allies or supporters, and the hope is that he will accept a dignified exit. In that case, Emmerson Mnangagwa, who used to be Robert Mugabe’s vice president, will be elevated to be president. However, I heard one official say that if Mugabe still insists on staying in office, then things will “get ugly.”

By the way, neither Emmerson Mnangagwa nor Grace Mugabe have been heard from since Wednesday.

Meanwhile, watching the street interviews with the people singing and dancing in Harare on Saturday, it is obvious that most of the people were in their own state of denial. Under Mugabe, they have suffered one economic disaster after another, as Mugabe’s “indigenization” program threw out farm and business owners who knew how to run a farm or a business, and replaced them with thugs and cronies from Mugabe’s Shona tribe who did not know how to run a farm or business.

The gleeful people on the streets of Harare interviewed on Saturday were saying things like “Mugabe fought our first war of independence, and now when he’s out it will be our second independence,” with the implication that things will get better. But things are not going to change at all. Mnangagwa is the same kind of genocidal psychopath that Mugabe is. The same “old guard” will be in charge, though with different players, and the same Shona thugs and cronies will be running the farms and businesses.

And in the next few weeks and months, as people realize that nothing is going to change, there are going to be plenty of new crises. Reuters and Zimbabwe Herald and Times Live (South Africa) and CNN

The events in Zimbabwe show how history unfolds and disasters occur

From the point of view of Generational Dynamics, the events in Zimbabwe the last few days are really quite remarkable. Seemingly the entire popular of Zimbabwe suddenly underwent a huge, massive change in behavior and attitude. Two weeks ago, everybody loved Mugabe. On Saturday, everybody hated Mugabe and wanted to get rid of him.

And we know what triggered this change: Mugabe’s announcement that he would fire his vice president so that his own wife could replace him as president. The resulting change was so fast and so massive that reporters keep saying that they cannot believe it even happened.

This kind of massive change in public opinion and behavior is the stuff of history and major historical events, including major historical disasters. In other circumstances, that kind of massive lightning change in public opinion and behavior can cause a panic that leads to a war, as happened for example when Israel panicked and attacked Hezbollah in Lebanon in 2006. The attack was triggered when Hezbollah kidnapped two Israeli soldiers along the border, and the attack came four hours later, with no plan and no objective.

That same kind of lighting change of public opinion and behavior can also cause a major financial panic and crash, and sometimes we do not know what the trigger is. I often like to point out that, even today, 88 years later, we still do not know what triggered the stock market panic on August 28, 1929, and why it did not occur six months earlier or six months later.

Today there is a huge stock market bubble, with the S&P 500 price/earnings ratio almost 25, far above its historic value of 14. China, the world’s second-largest economy, is running on a huge debt bubble and a huge real estate bubble.

Of special note is the Bitcoin bubble. When I wrote about it a month ago, Bitcoin was just above $5000. Today it is close to $8000, having been at just $728 a year ago. Bitcoin investments have nothing backing them except hot air and promises, and the explosive growth of Bitcoins is one of the most dramatic bubbles since the Tulipomania bubble of the 1600s. When the Tulipomania bubble burst after a panic in 1637, people cursed tulips for decades. When a panic occurs and the Bitcoin bubble implodes, the cursing will be far worse.

The thing we should learn from the last two weeks in Zimbabwe is that a panic can occur with lightning speed. Events that are probably impossible today become not only possible but completely real tomorrow. And unless you have anticipated those events and prepared for them, then you will suffer the consequences.