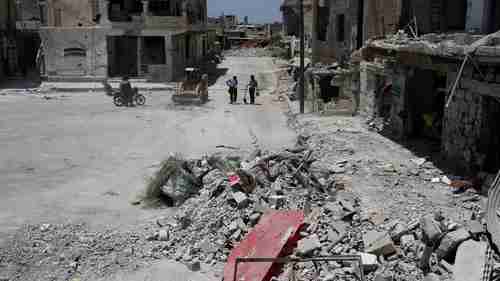 A bulldozer clears debris from the streets in Deraa, Syria July 25, 2017 (Reuters)

The U.S. State Department is warning the regime of Syria’s president Bashar al-Assad that the U.S. will take “firm and appropriate measures,” if al-Assad violates a ceasefire deal in the southern province of Deraa.

The U.S. warning was triggered when Syrian aircraft dropped leaflets on Deraa, threatening a military offensive. One of the leaflets includes a picture showing lined up bodies, saying, “This is the inevitable fate of anyone who insists on carrying arms.”

By means of massive bombing campaigns by Syrian and Russian warplanes, especially targeting women and children in hospitals, schools, and markets, including the use of barrel bombs containing chlorine and sometimes Sarin gas, the al-Assad regime has almost completed taking control of the Eastern Ghouta suburb of Damascus. The dropping of leaflets indicates that al-Assad plans next to turn his attention to Deraa.

Deraa is a critical region because it is on the border with Israeli-controlled Golan Heights, so action by Syria and its allies Iran and Hezbollah could spiral into an escalating military clash with Israel. Deraa is a mostly Sunni Arab province under the control of almost a dozen anti-Assad rebel groups, varying in ideology from moderate to jihadist. Some reports indicate that Israel has provided support for rebels and civilians in Deraa, treating them in their hospitals and providing weapons and other aid. The National (Abu Dhabi) and Sputnik (Moscow) and Al Jazeera (Doha)

The United States is concerned by reports of an impending Assad regime operation in southwest Syria within the boundaries of the de-escalation zone negotiated between the United States, Jordan, and the Russian Federation last year and reaffirmed between Presidents Trump and Putin in Da Nang, Vietnam in November. The United States remains committed to maintaining the stability of the southwest de-escalation zone and to the ceasefire underpinning it. We also caution the Syrian regime against any actions that risk broadening the conflict or jeopardize the ceasefire. As a guarantor of this de-escalation area with Russia and Jordan, the United States will take firm and appropriate measures in response to Assad regime violations.

The Presidents of the United States and Russia agreed in Da Nang to de-escalate the conflict. This agreement must be enforced and respected. Russia has declared to the world and to the UNSC that it will “guarantee” ceasefires in its self-declared de-escalation zones. Unfortunately, the Assad regime, with the support of Russia and Iran, has repeatedly violated these de-escalation zones, most recently in its brutal assault on East Ghouta. The Assad regime and its allies continue to prolong the conflict by ignoring their own de-escalation agreements and stonewalling the Geneva process.

Russia is duly responsible as a permanent member of the UN Security Council to use its diplomatic and military advantage over the Assad regime to stop attacks and compel the Assad regime to cease further military offensives. Russia has blocked UN Security Council actions that would have held Assad accountable for the use of chemical weapons and possibly saved innocent lives in Syria 11 times so far in this conflict. Six of those vetoes related to the use of chemical weapons, and others were providing humanitarian access and aid, and ceasing attacks against civilians. Russia should live up to its self-professed commitments in accordance with UNSCR 2254 and the southwest ceasefire, embodied in the Da Nang Statement issued by Presidents Trump and Putin.

This would not be the first time that Syrian-backed attacks on a “U.S.-enforced de-escalation zone” in Syria. On February 7, Syrian-backed forces tried to cross the Euphrates River to attack U.S.-backed Syrian Democratic Forces (SDF) in Deir az-Zour in eastern Syria. The result was a disaster for the Syrian forces, as several hundred were killed, and the rest were forced to flee in retreat.

I referred to this incident in yesterday’s World View article, since it has emerged that the Syrian-backed forces were actually mercenaries working for the Russian military contractor Wagner Private Military Company (Wagner PMC). Wagner is sometimes called “Vladimir Putin’s personal army,” referring to the president of Russia, and is often asked to perform Putin’s “dirty work,” allowing him deniability.

Bashar al-Assad has stated that his objective is to regain control of all of Syria. But anti-Assad rebels still control large contiguous areas of territory in the northwest and southwest. Kurdish and allied Arab militia in the Syrian Democratic Forces (SDF), back by the US hold the quarter of Syria east of the Euphrates. RTE (Dublin) and US State Dept. and Debka (Israel) and The National (Abu Dhabi)

On April 2, the Syrian government of the Bashar al-Assad regime passed “Law #10,” a complex new property law that requires property holders in Syria to produce documentation to formally prove ownership of their private property within a period of 30 days, or face confiscation.

There are six million internally displaced refugees in Syria and five million that have fled to other countries, with 3.5 million in Turkey, almost one million in Lebanon, another million in Iraq and Jordan, and over a million in Europe.

The intention has always been that these refugees would return home when the war ended and al-Assad’s clear intention is to make that impossible since their homes will be confiscated unless they can return quickly with the proper documentation, which is obviously impossible for the vast majority.

Even worse, any property owner wishing to register his lands must first obtain approval from state security officials, which means that anyone identified as having had anti-Assad sympathies can be arrested.

Al-Assad has been conducting genocide and ethnic cleansing against Arab Sunnis in Syria, and now he is taking steps to make sure that anyone who fled his violence cannot return home.

Lebanon is a country of four million people and has had its resources enormously strained by a million refugees that officials had hoped would one day go home. Lebanon’s prime minister Saad Hariri lambasted the legislation, saying, “This total invention of Decree 10 has no purpose but to prevent these displaced from going back to their country.” Daily Star (Lebanon) and AFP and Syria Direct (17-Apr) and Needa (Syria, 5-Apr) and SANA (Damascus, 2-Apr) (Trans)