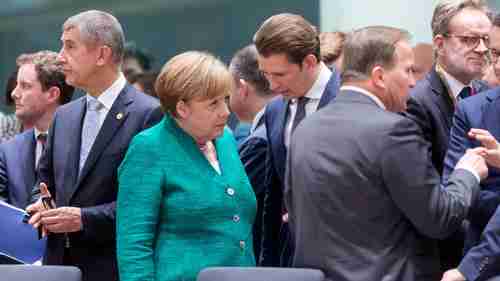 As we reported a week ago, the Europeans were desperately searching for a solution to the migration problem, and they were considering a form of detention center called “Disembarkation Platforms,” to be located in northern Africa, where newly arrived migrants could be taken initially for processing of asylum requests.

The promise was that a detailed plan would be worked out during the the major EU Summit meeting held in Brussels the last two days. The leaders met all day Thursday and then long into the night, finally announcing an agreement at 4:30 am. However, the agreement had no more details than the original proposal, and appears to be a fudge.

(Note to lexicographers: I’ve been seeing the word “fudge” a lot more lately. Besides a chocolate goodie, a fudge is something that is ambiguous, deceitful, or a compromise. It seems to have replaced the phrase that was commonly used during Greece’s financial crisis: “kicking the can down the road.” In either case, they refer to a non-agreement that lets everyone congratulate one another on having reached a deal, and then go home and get some sleep, while postponing the search for a real solution to a later date.)

The new agreement tells almost nothing about how the Disembarkation Platforms would work:

5. In order to definitively break the business model of the smugglers, thus preventing tragic loss of life, it is necessary to eliminate the incentive to embark on perilous journeys. This requires a new approach based on shared or complementary actions among the Member States to the disembarkation of those who are saved in Search And Rescue operations. In that context, the European Council calls on the Council and the Commission to swiftly explore the concept of regional disembarkation platforms, in close cooperation with relevant third countries as well as UNHCR and IOM. Such platforms should operate distinguishing individual situations, in full respect of international law and without creating a pull factor.

That paragraph contains just over 100 words, and it manages to do so while saying absolutely nothing.

No country has volunteered to host a Disembarkation Platform. Algeria, Morocco, and Tunisia have explicitly refused, and a spokesman for one of the three governments in Libya also refused and said that he thought the other two governments would refuse as well. One concern that all of these countries have is that a Disembarkation Platform would encourage jihadist attacks.

Even if an African country considered hosting one of these Disembarkation Platforms, there would be international outrage from human rights activists.

The next paragraph of the agreement extends the detention center concept to “Controlled Centers” within the EU itself:

6. On EU territory, those who are saved, according to international law, should be taken charge of, on the basis of a shared effort, through the transfer in controlled centers set up in Member States, only on a voluntary basis, where rapid and secure processing would allow, with full EU support, to distinguish between irregular migrants, who will be returned, and those in need of international protection, for whom the principle of solidarity would apply. All the measures in the context of these controlled centres, including relocation and resettlement, will be on a voluntary basis, without prejudice to the Dublin reform.

This paragraph says almost nothing. The one thing that it does say – twice – is “on a voluntary basis,” which means that no country would have to allow a “Controlled Center” on its soil.

France and Austria, two countries that border Italy, immediately said that they would not be willing to host Controlled Centers on their soil.

France’s president Emmanuel Macron said that his reading of the agreement indicated that Controlled Centers would only be set up in “frontline states,” which means Italy and Greece, but certainly not France. Italy’s prime minister Giuseppe Conte issued a rebuke, saying that “Macron was tired,” and did not understand the agreement, since it said that all EU states could set up the centers, “including France.”

One analyst I heard, who obviously liked this deal, painted a picture of dozens of these little Controlled Centers located all across the EU. These people are truly living in Fantasyland. European Council – agreement and Vice News and European Council – Disembarkation Centers

Italy had threatened to veto the entire agreement unless the “Dublin regulation” was modified. This regulation specifies that the EU country that a migrant enters first is the country that must house the migrant and process his asylum application.

This regulation obviously places almost the entire burden of housing and processing migrants on Italy and Greece. Italy had demanded that the regulation be changed so that other countries would have to take a portion of the migrants entering Italy, but obviously no one wants to agree to that, and, in fact, Hungary, Poland, and Austria are opposed to any change at all to this regulation. So the agreement is silent on the Dublin regulation.

The rules of the European Council specify that no agreement can be issued unless it is unanimously agreed. Italy had threatened to veto any agreement that did not modify the Dublin regulation. All Italy got was some vague wording that migration is a European problem, not just an Italian problem. But the agreement was not vetoed, so apparently Italy backed down from its threat. Italy’s prime minister Giuseppe Conte may be rebuked by other Italian leaders for this.

The agreement was also silent on “secondary migration,” whereby many migrants that entered Italy went on to settle in Germany. Germany’s Chancellor Angela Merkel is facing a challenge from Horst Seehofer, the leader of another member of her governing coalition. Seehofer wanted the agreement to specify that migrants in Germany who entered the EU in Italy should now be sent back to Italy. This would require a bilateral agreement between Germany and Italy, and obviously Italy will not agree to such a deal. Seehofer has threatened to bring down Merkel’s government if he doesn’t get his way, and he may do so early next week. However, there have been some reports that Seehofer is softening his position, so he may back down also.

At any rate, the only thing that is certain is that even though all the EU leaders were congratulating themselves and each other for reaching such a fine agreement, nonetheless that agreement is a fantasy. The EU is no closer to solving the migration problem than it was a week ago. AFP and Reuters and Al-Jazeera