Gunmen massacre IRGC soldiers and their families during military parade in Ahvaz, Iran 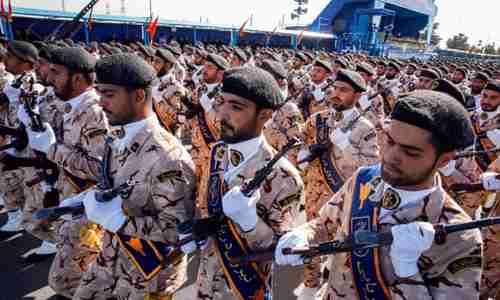 IRGC soldiers marching in military parade on Saturday, prior to terrorist attack (AFP)

Dozens of people, including women and children, were killed in a terrorist attack on a military parade in Iran, in the city of Ahvaz, the capital city of southwest Khuzestan province, bordering Iraq and the Persian Gulf.

The attack occurred during a military parade marking the beginning of the Sacred Defense Week, a nationwide ceremony commemorating the anniversary of the start of the Iran/Iraq war that began with an invasion by Iraq’s Saddam Hussein, and continued from 1980-88. Some 1.5 million people were killed in the Iran/Iraq war, and it ended in 1988 with Saddam Hussein using the WMD mustard gas on Kurds and Iranians.

The attack targeted members of Iran’s powerful paramilitary group, the Islamic Revolutionary Guard Corps (IRGC), and their families. Four gunmen dressed in fake IRGC uniforms sprayed random gunfire into a crowd of marching soldiers, bystanders and government officials. The military parade was being televised live, so Iranians saw marching soldiers suddenly scramble to flee or fall to the ground to escape gunfire, many of them shielding children.

Khuzestan province has the country’s largest oil reserves. With its proximity to Iraq and the presence of a large Arab minority, the area has seen ethnic violence in the past. It was also a frontline in the eight-year Iran-Iraq War, as Saddam Hussein was trying to gain control of Khuzestan province and its oil wealth. Mehr News (Tehran) and AP and Press TV (Tehran)

Iran’s Supreme Leader Ali Khamenei immediately said, “This crime is a continuation of the plots of the regional states that are puppets of the United States, and their goal is to create insecurity in our dear country.”

The “regional states” that Khamenei alluded to are Saudi Arabia and the United Arab Emirates (UAE).

Iran’s Foreign Minister Mohammad Javad Zarif made a similar claim in a tweet:

Terrorists recruited, trained, armed & paid by a foreign regime have attacked Ahvaz. Children and journos among casualties. Iran holds regional terror sponsors and their US masters accountable for such attacks. Iran will respond swiftly and decisively in defense of Iranian lives.

A year ago, John R. Bolton, former US ambassador to the United Nations, made a proposal to President Trump get out of the nuclear deal with Iran, which was a subject still under discussion at that time. Bolton recommended going beyond simple abrogation of the agreement to take steps “to limit Iran’s malicious activities and global adventurism.” These actions included:

Bolton’s plan, which he says is for discussion purposes only, is extremely belligerent and threatening, and specifically recommends providing assistance to ethnic groups that have had terrorist elements, including Khuzestan Arabs, Pakistan’s Balochis, and Iraq’s Kurds.

Furthermore, although it is not generally believed that the U.S. funded any such groups, some analysts believe that Saudi Arabia has funded Khuzestan Arabs.

The first to claim credit was ISIS. But ISIS claims credit for many attacks in which it played no part, in order to puff up its own brand name. So the ISIS claim is not generally believed.

An Arab nationalist separatist group, the Patriotic Arab Democratic Movement in Ahwaz (al-Ahwaz or al-Ahvaziya or al-Ahvazi) also claimed responsibility for the assault, and their claim is generally believed. A statesman issued by a spokesman said that the attack on Saturday “was in response to the repression of Ahvazi Arabs. We do not have a choice but to carry out a resistance.”

Little is known about the al-Ahvazi, except that it is an Arab separatist group based in the city of Ahvaz, the site of Saturday’s attack. It’s believed to be funded by Saudi Arabia.

In the past, the group has attacked only unguarded pipelines, so this is a major escalation by the group.

However, the IRGC made its own escalation last week, attacking Kurdish separatists in northern Iraq with missiles. Saturday’s attack is almost a mirror image of last week’s missile attack on the Kurds, so this may be a tit-for-tat escalation.

Some analysts are suggesting that Saturday’s attack was the Saudis laying a trap for Iran. According to this conspiracy theory, the Saudis would like Iran to retaliate militarily in some way, to create a wider war, forcing the United States military to get involved. My response to this suggestion is the usual one: Be careful what you wish for. Times of Israel and Guardian (London)

John J. Xenakis is author of the book, Iran’s Struggle for Supremacy: Tehran’s Obsession to Redraw the Map of the Middle East, available on Amazon for $5 for the digital version or $7 for the paperback version.