Cambodia denies major China-funded seaport project is a military base 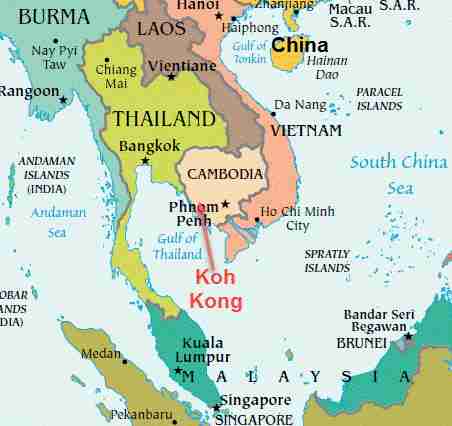 Cambodia’s Prime Minister Hun Sen has been forced repeatedly to deny that China is building a military naval base in Koh Kong province on the Gulf of Thailand. A naval base in that location would give China commanding control of the southern part of the South China Sea, which it currently is occupying in violation of international law.

China has long been Cambodia’s top provider of military equipment. For years, there has been a Chinese-built $3.8 billion land project in Koh Kong province in Cambodia along the Gulf of Thailand. The project began a decade ago, operating under a 99-year lease granted to China. The land project contains a deep-water port said to be deep enough to potentially accommodate not just container ships, but Chinese navy frigates and destroyers as well.

A report last month in Asia Times said that the naval base was already under construction, forcing Hun Sen to make a denial:

I also received a letter from U.S. Vice President Mike Pence raising concerns of the possible presence of a Chinese naval base in Cambodia in the future.

That Hun Sen is unwilling to violate Cambodia’s constitution is laughable. This year, his party won a national parliamentary election, taking all 125 parliamentary seats that were up for election. He accomplished that amazing feat by jailing or assassinating political opponents, taking control of all of the media, closing all radio stations critical of the government, and ordering the complete dissolution of the opposition political party – all of that, presumably, in violation of the constitution.

The size of land granted to China under the 99-year lease is reported to be another violation of the constitution. The grant is 45,000 hectares, while Cambodian law limits such concessions to 10,000 hectares.

So, just like Vladimir Putin, Xi Jinping, Bashar al-Assad and other leaders, we can assume that anything that Hun Sen says is a complete lie, except by accident. At any rate, his assurances to Mike Pence that China is not building a naval base are completely meaningless. Asia Times and Radio Free Asia and Khmer Times

Sihanoukville, in Preah Sihanouk province on the southern border of Koh Kong province, used to be a premier seaside resort and tourist attraction but has now turned into a Chinese enclave. It is a visible example of China’s rising domination of Cambodia’s economy. Hun Sen’s critics claim that Hun Sen has enabled China’s de facto “colonization” of Cambodia.

Whether or not the Koh Kong deepwater seaport will be a Chinese military base, there is little doubt of China’s increasing military presence in Cambodia. Cambodia is a key country within Beijing’s Belt and Road Initiative (BRI) and the seaport has taken on increasing significance. China has pledged $100 million in military grants for training and equipment for the Cambodian military. Sihanoukville has given itself over entirely to Chinese investment, with a $1.1 billion investment from China in just the past year. The key complaint for many in Sihanoukville is that even though Chinese investment brings wealth, it is mainly kept within their own community.

Cambodia appears to be another victim of China’s “debt trap diplomacy.” About half of Cambodia’s $6 in foreign debt is owed to China, and as usual, it is China that has benefited from the infrastructure projects, leaving Cambodia with little more than a pile of debt which it will never be able to pay back.

As happened with Sri Lanka’s Hambantota seaport, this could give China complete control over Cambodia’s Koh Kong port, and China could use it as a military naval base whether doing so violates Cambodia’s constitution or not. Asia Times and Reuters (19-Jun) and Asia Times and Diplomat