Another massive demonstration against Hong Kong’s controversial extradition bill was held as planned on Wednesday, with tens of thousands of demonstrators filling the streets.

Police opened fire with rubber bullets and tear gas, drawing condemnation from human rights groups for excessive response to reports of aggressive behavior from some demonstrators.

The result was a far uglier scene than the immense demonstration held on Sunday, followed by an announcement from the legislature that it had postponed further debate on the bill.

An Associated Press video report from Hong Kong captured the vast size of the protests and the panic that ensued when tear gas was deployed:

Although the demonstration was universally described as “peaceful” at first, police and government officials soon complained about throngs of protesters occupying public spaces, blocking roads, and shutting down businesses. Some demonstrators reportedly brandished umbrellas – an important symbol of pro-democracy activism in Hong Kong – and charged at the police.

“Didn’t we say at the end of the Umbrella Movement we would be back? Now we are back!” opposition legislator Claudia Mo said during the demonstration, referring to the massive demonstrations of 2014.

The return of the Umbrella Movement is not welcome news to the pro-Beijing government of Hong Kong. As in 2014, many of the anti-extradition demonstrators are students, some of them teenagers. “Sad sight watching 15- and 16-year olds struggling to breathe,” ABC News correspondent James Longman remarked after tear gas was deployed.

Mo and other pro-democracy lawmakers held a press conference in which they accused chief executive Carrie Lam of selling out the people of Hong Kong and called on her to resign, a demand many of the people packing the streets also made.

“Carrie Lam, have you gone crazy? You are now treating Hong Kongers as your enemy. You are declaring war on our generation,” lawmaker Roy Kwong said.

“You said that if the mainstream opinion believed you were not fit to be the Chief Executive you would resign. Please fulfill your election promises,” Kwong hectored Lam.

The pro-democracy group blamed Lam and the Hong Kong police for escalating tensions with unnecessary violence, as did many of the people international media organizations and human rights organizations interviewed on the street.

“The ugly scenes of police using tear gas and pepper spray against overwhelmingly peaceful protesters is a violation of international law. Police have a duty to maintain public order, but in doing so they may use force only when strictly necessary. Hong Kong’s police have today failed to live up to this standard,” Amnesty International (AI) said on Wednesday. 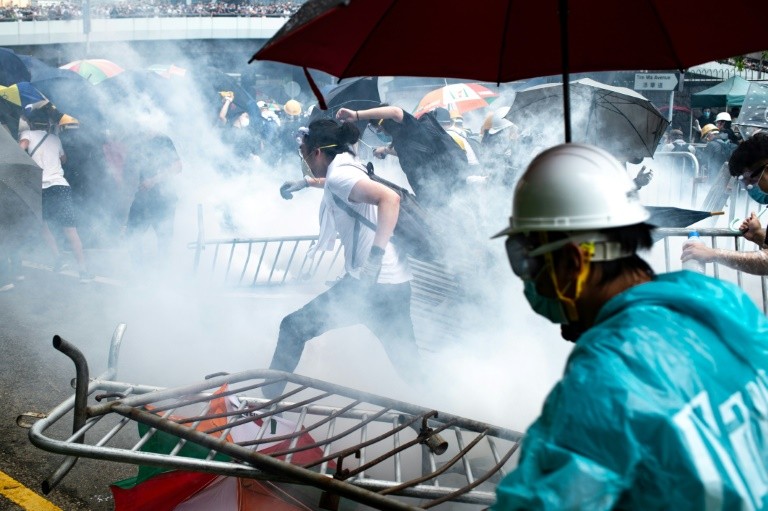 A protester throws a tear gas canister fired by police during a rally against a controversial extradition law proposal outside the government headquarters in Hong Kong on June 12, 2019. – Violent clashes broke out in Hong Kong on June 12 as police tried to stop protesters storming the city’s parliament, while tens of thousands of people blocked key arteries in a show of strength against government plans to allow extraditions to China. (DALE DE LA REY/AFP/Getty Images)

“The police have taken advantage of the violent acts of a small minority as a pretext to use excessive force against the vast majority of peaceful protesters,” AI charged.

Police were reportedly able to clear most of the Admiralty district after a few hours and many of the demonstrators have gone home, although thousands are still on the streets and it remains to be seen if those who departed will return for another day of protests. At least 22 injuries have been reported but no fatalities.

Government officials and protest leaders blamed each other for the outbreak of violence. Police Commissioner Stephen Lo claimed at a press conference that his officers defended themselves with tear gas and rubber bullets after protesters began throwing bottles and arming themselves with sharpened metal bars.

Lo described the situation as “dangerous” and “chaotic” and said a “riot” broke out in the Admiralty district, the area where Hong Kong’s legislature is located.

When a reporter at the press conference asked if Lo was considering a call for help to the People’s Liberation Army of mainland China, he replied: “Definitely not, at this stage.” The caveat at the end of his denial will not be reassuring to Hong Kongers who just finished observing the 30th anniversary of the Tiananmen Square massacre.

A spokesman for the Chinese Foreign Ministry on Wednesday called rumors of a military deployment to Hong Kong “fake news” and claimed the demonstrators were acting against “mainstream public opinion.” The Chinese government has accused the demonstrators of acting as puppets for hostile foreign powers seeking to destabilize Hong Kong. 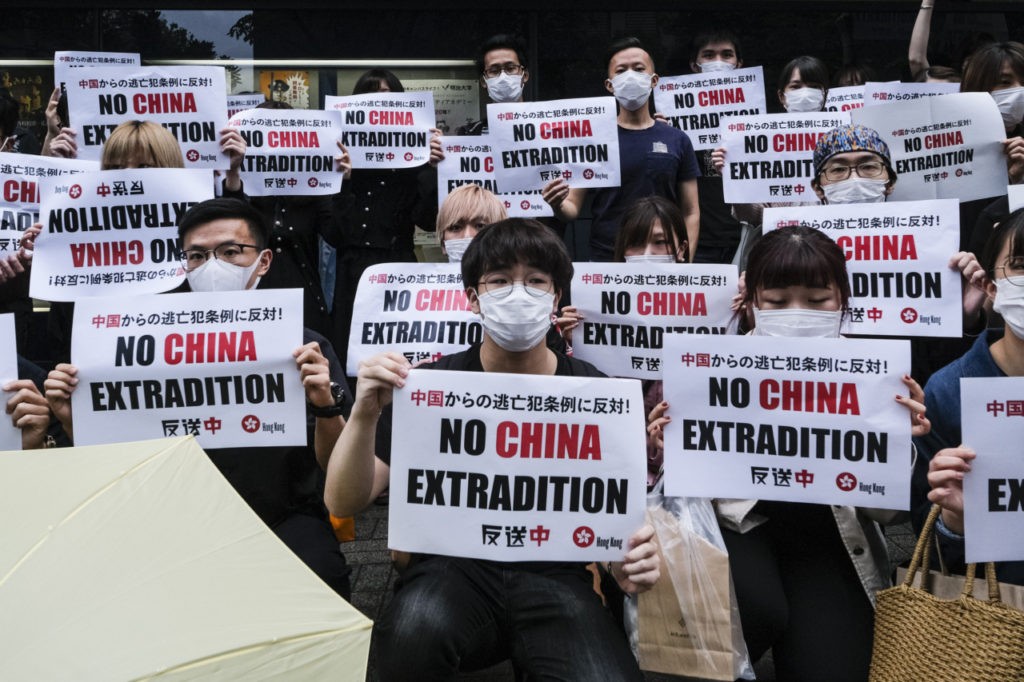 Foreign students In Japan hold up a placard which says ‘No China Extradition’ at Meiji University on June 12, 2019 in Tokyo, Japan. Students gathered in Meiji University to show their support as Hong Kong braced for another mass rally in a show of strength against the government over a divisive plan to allow extraditions to China. (Keith Tsuji/Getty Images)

“Ironically, the Chinese government dared to claim the ‘one country, two systems’ framework in Hong Kong has been a huge success recognized by the world on the same day of the protests,” Tsai pointed out.

The government of the United Kingdom, which handed control of Hong Kong over to mainland China in 1997, expressed concern about the extradition bill on Wednesday. Prime Minister Theresa May noted a large number of British citizens in Hong Kong could be affected by the bill and worried about damage to “the rights and freedoms that were set down in the Sino-British joint declaration.”

“The ongoing protests in Hong Kong are a clear sign of significant public concern about the proposed changes to extradition laws. I call on all sides to remain calm and peaceful,” said British Foreign Secretary Jeremy Hunt.

“I urge the Hong Kong government to listen to the concerns of its people and its friends in the international community and to pause and reflect on these controversial measures,” Hunt advised.

The Hong Kong legislature announced on Wednesday that planned debates on the extradition bill will be postponed due to the chaos in the streets. Opposition lawmakers urged an even longer and firmer suspension for the bill, warning that Hong Kong “is on the brink of crisis.”

The UK Guardian noted that Hong Kongers have “developed a sudden – but perhaps understandable – interest in encrypted communications” as the protest movement grows larger and the police response becomes more intense. Secure messaging apps have become some of the top downloads from Hong Kong software sites.