The CEO of Taiwanese company Foxconn, a supplier of smartphone components for Apple, on Tuesday described India as a “bright spot for development” and said his company is planning “further investments” there, once the coronavirus pandemic is no longer a major factor in operations.

Foxconn has plants in both India and China, which are currently at odds after a violent clash between their soldiers in the Himalayas last week. Angry Indians have mounted a campaign to boycott goods from China, which accounts for a sizable portion of India’s total imports.

Foxconn chairman Liu Young-way said at his company’s annual meeting that revenues are rebounding after a massive 90 percent drop during the coronavirus pandemic, with new growth driven by the post-pandemic increase in telecommuting and online entertainment.

“We are fully pushing ahead with next steps there, and maybe in a few months’ time we can reveal on our website the next steps and report back to everyone. We’ll have further investment there,” Liu said of Foxconn’s investment outlook in India.

India was interested in developing a stronger economic partnership with Taiwan long before the border battle erupted. Taiwan’s investments in India topped $360 million in 2018, an increase of over a thousand percent in two years, while the trade volume between the two countries grew from $1 billion in 2000 to $7.5 billion in 2018. Taiwan’s ambassador to India promised last October that the best was yet to come.

The Wuhan coronavirus outbreak considerably dimmed India’s view of Chinese influence, especially once China began aggressively using its economic leverage to control the global diplomatic fallout from the pandemic, alternately bribing and threatening smaller nations into accepting its political narrative of the epidemic.

In May, the Hindu Business Line noted that Taiwan could help India break China’s grip on electronics and telecommunications, two of the biggest markets where Indians are currently frustrated that they cannot effectively boycott Chinese products.

The editorial noted that India’s inability to produce semiconductors is a major reason Chinese companies dominate the Indian smartphone and computer markets, with Beijing dangerously close to completely controlling India’s next-generation 5G networking system. “Control” is the right word because Hindu Business Line pointed out that Chinese telecom giants such as Huawei make a point of hiring Indians only for low-level positions in its Indian operations and zealously block the kind of technology transfers that helped China appropriate so much priceless research from the United States over the past few decades.

Partnership with Taiwanese companies offers India a chance to boost its semiconductor capabilities and begin clawing back its own tech market from China, and Taiwan has clearly signaled a desire for closer relations with India.

Taiwan News noted that Hong Kong democracy activists are cranking out memes to declare their support for India during its standoff with China, and modified one of them to create a #TaiwanStandsWithIndia hashtag: 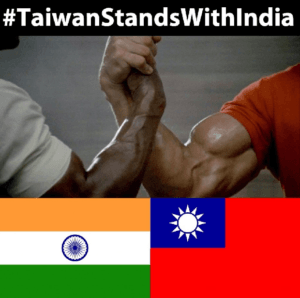 “An illustration showing Rama, the seventh avatar of the Hindu god Vishnu, drawing a bow and preparing to shoot a huge arrow into a Chinese dragon posted on Hong Kong social media site LIHKG and reported on by Taiwan News spread like wildfire in India on Wednesday,” Taiwan News added, explaining that it went with the muscular handclasp photo because it sent a more positive message of friendship than a drawing of an Indian deity murdering the national symbol of China with a bow.

Taiwan’s Ministry of Foreign Affairs said on Tuesday that foreign investment increased by 40 percent during the first quarter of 2020, including substantial increases in the nations included in Taiwan’s “New Southbound Policy” to increase Taiwanese engagement across Asia. One of those nations is India.

China is naturally displeased by the deepening diplomatic and economic relationship between Taiwan and India. The Chinese Communist Party (CCP) in May peevishly demanded that Indian politicians stop expressing their support for “secessionist” Taiwan, with particular ire directed at two members of India’s governing BJP party for “virtually attending” the second inaugural of Taiwanese President Tsai Ing-wen. Most international attendance at Tsai’s inauguration was virtual, due to travel restrictions because of the Wuhan coronavirus pandemic.

According to the CCP, Indian support for Taiwan violates the “one-China principle,” which holds that Taiwan is a semi-autonomous province of China that will sooner or later be reclaimed by the Communist tyranny, not an independent nation-state.

“Any wrong signals will encourage those separatists to go even farther on the wrong and dangerous track, which would ultimately undermine the peace and prosperity of the region,” the Chinese Foreign Ministry warned in a letter to the Taiwanese government.