An attempt to hold nationwide marches Wednesday to demand the Cuban Communist Party reveal the whereabouts and health status of hundreds, if not thousands, of people arrested and disappeared on July 11 prompted heavy police presence and “preemptive” arrests of people suspected to be attending.

Thousands of protesters organized dozens of local marches throughout the island of Cuba on July 11 demanding an end to the communist regime. The earliest reports of protests on that day came from San Antonio de los Baños, a Havana suburb, but spread all the way to Santiago de Cuba on the other side of the island. Holguín and Camagüey, eastern Cuba, documented some of the largest peaceful marches anywhere in the country. 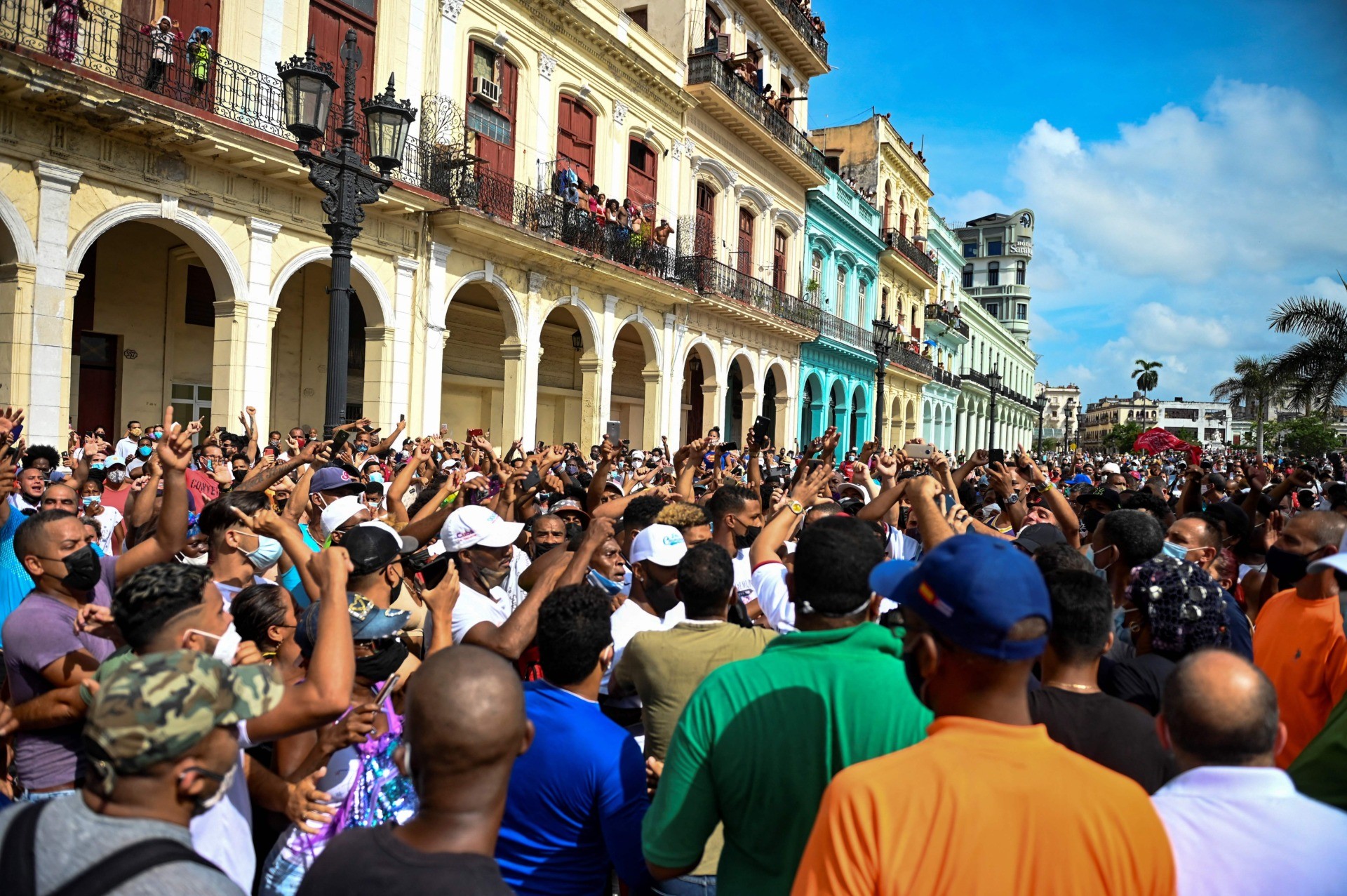 People take part in a demonstration against the government of Cuban President Miguel Diaz-Canel in Havana, Cuba on July 11, 2021. Thousands of Cubans took part in rare protests against the communist government, marching through a town chanting “Down with the dictatorship” and “We want liberty.” (YAMIL LAGE/AFP via Getty Images)

Despite the protests being overwhelmingly peaceful – and the Cuban population not enjoying the right to bear arms – the Communist Party responded to the protests with extreme repression. President Miguel Díaz-Canel, the figurehead representing the Castro family regime, delivered remarks on national television urging civilians to commit violent assaults on people suspected to be “counter-revolutionaries.” Díaz-Canel described his command as an “order of combat.”

In addition to encouraging vigilante violence – and, evidence suggests, organizing armed civilian gangs to attack suspected dissidents – the Castro regime engaged in mass arrests, public beatings, and disappearances of dissidents. Cuba Decide, a human rights advocacy group, has confirmed the arrests or disappearances of 667 people nationwide since July 11, of which 526 remain in police custody. This does not include people under house arrest – including many prominent independent journalists, prevented from doing their jobs – and experts say the number is artificially deflated by the difficulty of reaching some parts of remote Cuba. The true number, advocates say, could be in the thousands. 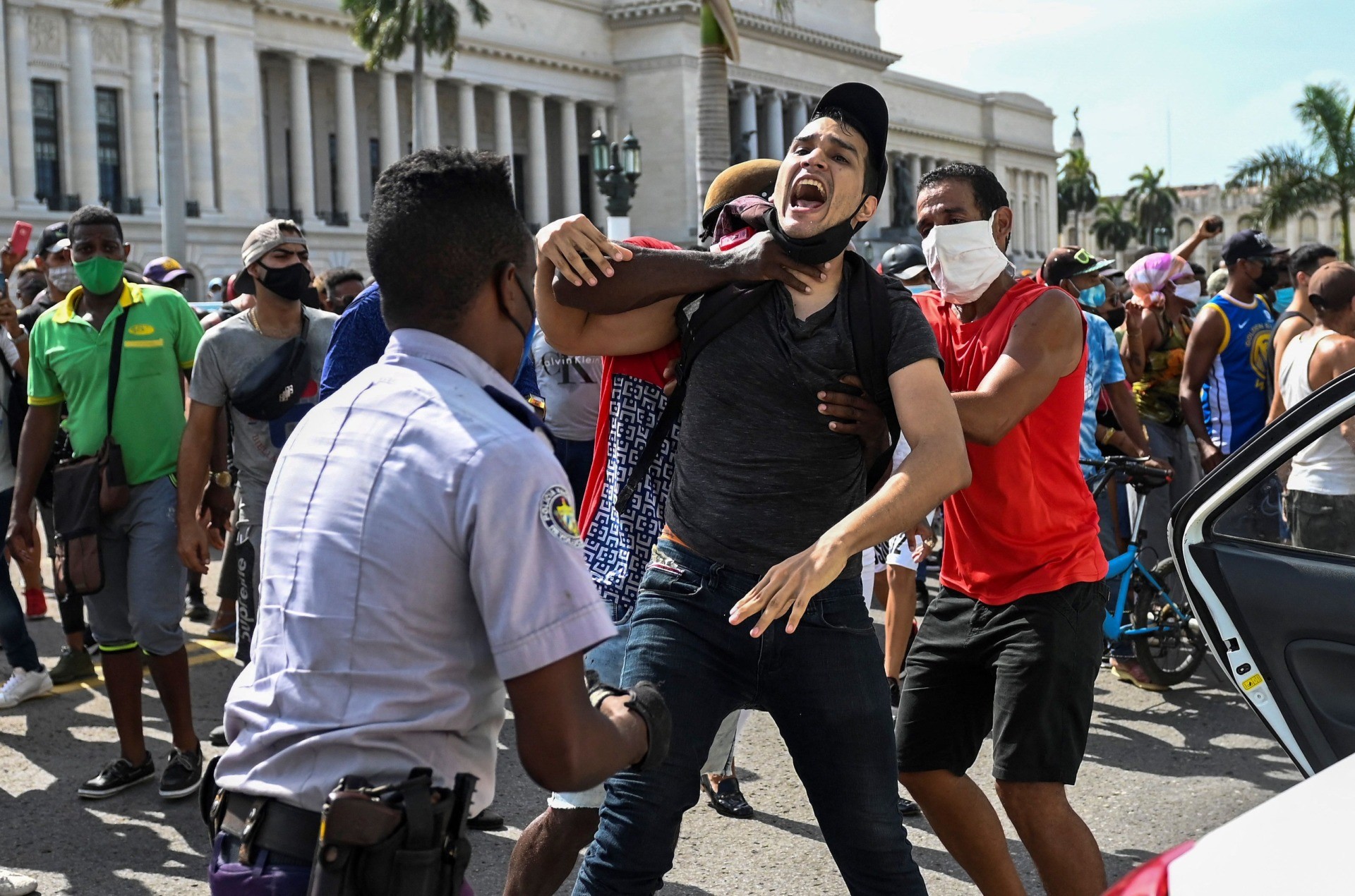 A man is arrested during a demonstration against the government of Cuban President Miguel Diaz-Canel in Havana, on July 11, 2021. (YAMIL LAGE/AFP via Getty Images) 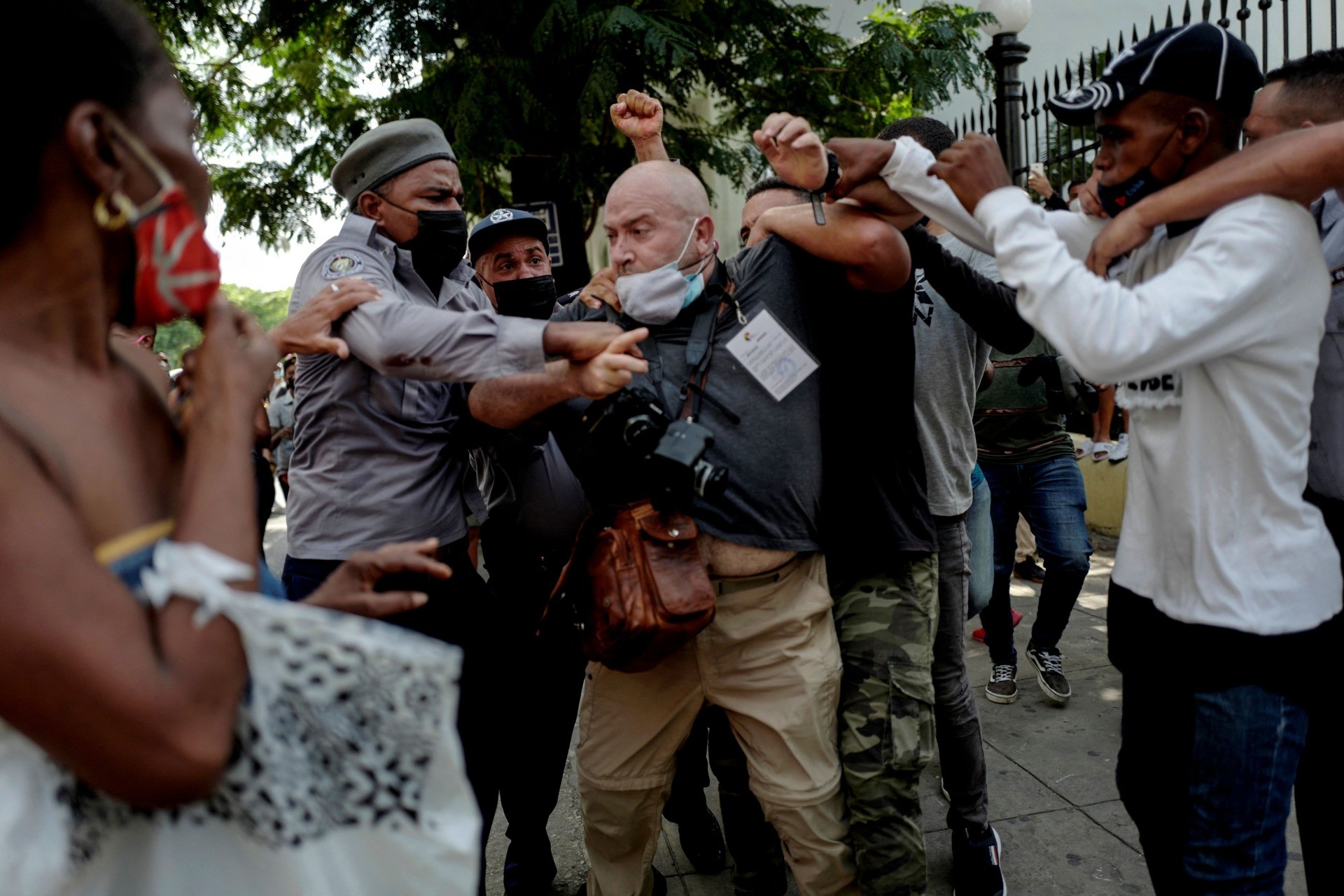 AP photographer, Spanish Ramon Espinosa, is attacked by the police while covering a demonstration against Cuban President Miguel Diaz-Canel in Havana, on July 11, 2021. (ADALBERTO ROQUE/AFP via Getty Images)

To raise awareness of the mass arrests, the Movement of July 11 Mothers, a group founded to organize the families of the imprisoned and disappeared, called for a protest beginning at 11 a.m. on Wednesday nationwide. The group used word of mouth – the government shut down the internet after the protests – to urge peaceful marches in every city in the country demanding only to know the fates of their children. It actively encouraged only mothers of those arrested to participate; supporters were told to line the streets, not march.

The Movement of July 11 Mothers adopted the same tactic used by one of Cuba’s largest dissident groups, the Ladies in White – a coalition of mothers, wives, sisters, and brothers of political prisoners beaten and arrested during the Black Spring communist crackdown of 2003. While many of those imprisoned in 2003 have since been released, the Ladies in White have continued their singular act of protest every week: wearing white and carrying images of their loved ones, attempting to attend Catholic Mass in silence. The Castro regime forced the Catholic Church during the Obama era to ban the women from attending Mass.

To prevent the creation of a second Ladies in White phenomenon, the Castro regime flooded Havana with police cars Wednesday and actively arrested people suspect of planning to attend any anti-government marches. Dissidents managed to record the arrest of two such people and smuggle the video out of Cuba. Marthadela Tamayo and Osvaldo Navarro were walking down the street, apparently peacefully, when state security agents intercepted and arrested them, based on no apparent criminal activity. No evidence exists that the agents had a warrant against them or reason to believe they were a threat to society. The couple were, however, on their way to the meeting point of the July 11 Mothers march. 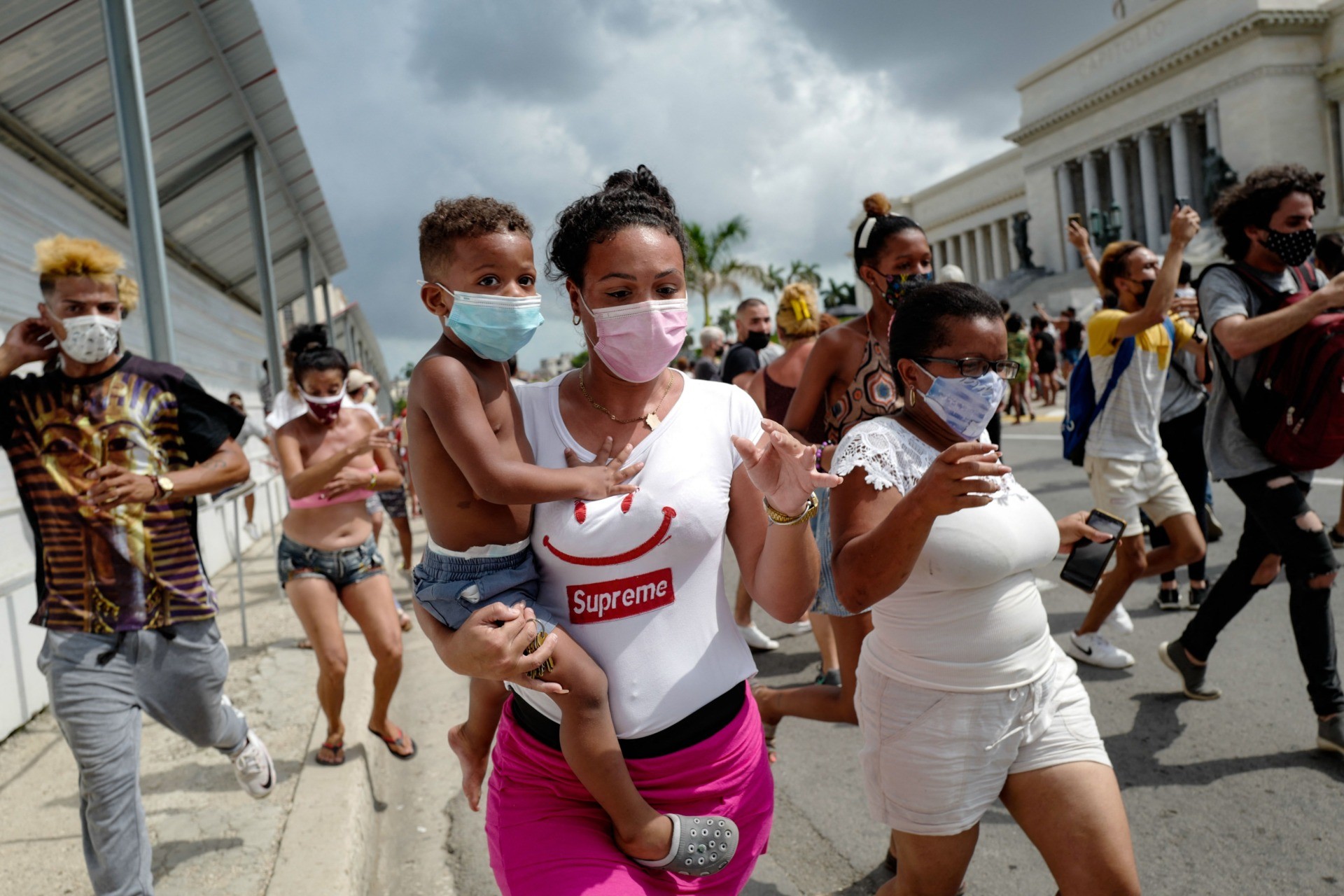 Cubans march in front of Havana’s Capitol during a demonstration against the government of Cuban President Miguel Diaz-Canel in Havana, Cuba. (ADALBERTO ROQUE/AFP via Getty Images)

Navarro himself took the video. The video shows police officers intercepting the couple. Navarro can be heard repeatedly asking of police, “don’t touch her,” referring to Tamayo, then asking, “where are we going?” Police do not respond and at no point appear to explain why the couple is being taken into custody.

Diario de Cuba, which reported details of the video arrest, noted that its own journalist “Jorge Enrique Rodríguez” was “intercepted” on his way to the march’s meeting point and threatened with arrest if he did not immediately return home and stay there. At least one other journalist, Juan Manuel Moreno, was arrested along with his wife Zelandia de la Caridad for attempting to attend the march.

“They have state security forces along with auxiliary forces from the Ministry of the Interior blocking roads to prevent the protest,” activist Juan Antonio Madrazo told the Miami-based AméricaTeVe of Havana. Madrazo also confirmed the authenticity of the above arrest video and noted that many who wished to attend the protests endured similar repression.

The Communist Party of Cuba has plainly denied the existence of any political prisoners or disappeared protesters.

“In Cuba, There Are No Disappeared or Tortured People,” a headline in Granma, the official newspaper of the Party, read Wednesday. The denial echoes a remark by dictator Raúl Castro during a press conference alongside then-President Barack Obama in 2016, in which he replied to a question about the fate of the island’s political prisoners by CNN reporter Jim Acosta.

Multiple human rights groups indeed produced a list of prisoners of conscience in Cuba, which Castro then ignored.