The mothers of protesters missing since anti-communist marches erupted nationwide in Cuba on July 11 are planning to take the streets of the island on Wednesday demanding to know what the regime did to their children.

The protest is expected to be the largest national anti-communist event within Cuba since the July 11 protests. International news outlets have struggled to document the ongoing protests since July 11 as the Castro regime shut down internet access nationwide following a rapid deluge of videos of police using live ammunition against unarmed protesters began to surface from the country.

Assembly of the Cuban Resistance

The Movement of July 11 Mothers, a newly formed support group, is reportedly organizing large-scale demonstrations against the regime’s treatment of their children, who they assert are legitimate protesters and not “delinquents” as the communist authorities have described them, the independent outlet Cubanet – which had several of its journalists arrested over the past two weeks – reported. The group takes its name from the start date of the latest round of anti-communist protests on the island.

The mothers aim to turn out large crowds in every Cuban province and to parade through Havana, beginning at 11:00 a.m. on Wednesday. The group further advises local gatherings to take precautions against spreading the Chinese coronavirus, which has ravaged Cuba due to the regime’s invitation of European tourists at the height of the first wave of the pandemic and its refusal to implement safety protocols in schools and at food ration lines.

Eight days into the protests, the number of protesters wounded, arrested, killed, or disappeared remains unknown. Some human rights groups have compiled lists of individuals confirmed arrested or missing, with the caveat that many of those repressed may not have access to anyone in the outside world that could report their fate.

At least 5,000 people had been arrested by July 14, three days into the protests, according to the independent Cuban news source 14 y Medio. The Cuban Observatory for Human Rights (OCDH), a human rights group, managed to confirm at least 560 victims of this practice as of Saturday, listing them by name.

Prominent dissidents, such as José Daniel Ferrer and artist Luis Manuel Otero Alcántara, whom the regime has routinely jailed over the years, rank among the arrested, 14 y Medio noted. 14 y Medio noted the absence of any official figures and highlighted the range of estimates from human rights organizations, which assert the regime’s victims number in the “thousands.” The United Nations, in contrast, has identified at least 187 disappeared demonstrators. The lower figures represent only confirmed victims of the regime. Many more Cuban parents know nothing of their loved one’s whereabouts or vital status.

Beginning on July 11, thousands of Cubans took to the streets of San Antonio de los Baños unequivocally demanding an end to communism on the island. The protests quickly spread to every major city and shouts of “Down with communism!” and “fuck Díaz-Canel!” quickly became bywords of the movement.

In response, “President” Miguel Díaz-Canel, the Castro regime’s figurehead, called for Havana loyalists to take to the streets and attack the peaceful dissidents, issuing an “order of combat” during a bellicose speech on July 11. The subsequent crackdown saw police unleash live rounds on demonstrators in many instances, while other violent reprisals involved gruesome police beatings or the turning of attack dogs on the crowds. 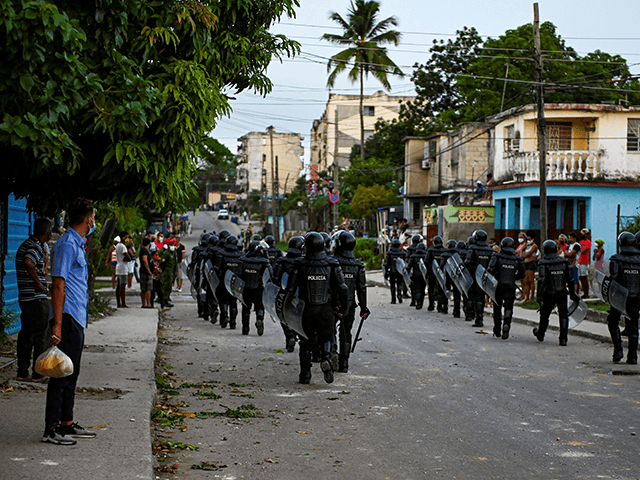 Riot police walk the streets after a demonstration against the government of President Miguel Diaz-Canel in Arroyo Naranjo Municipality, Havana on July 12, 2021. ( YAMIL LAGE/AFP via Getty Images)

Cuban Prisoners Defenders, a human rights group advocating for the Castro regime’s incarcerated dissidents, documented the crackdown’s brutality and the regime’s many crimes against the Cuban people in a Monday letter to the United Nations High Commission for Human Rights, ADN Cuba reported.

Civilian support for the Cuban people has exploded in the United States, especially in Florida, which boasts a large population of Cuban expats and their children. Large crowds turned out in Miami almost immediately after the protests began to express solidarity with the anti-communists on the island. On Saturday, protesters demanding action from Biden administration staged a “die-in” outside the White House during which they dressed in bloodstained communist school uniforms and played dead to represent Havana’s countless victims.

The responses from President Joe Biden and his administration, however, have ranged from apathetic to counterproductive. A day after the protests began, Washington announced it would lift sanctions against the socialist dictatorship in Venezuela, a de facto colony of communist Cuba that provides the Castro government with essentially free energy. On Monday, Biden held a Zoom call with several Cuban-American celebrities.