China’s state-run Global Times celebrated the Taliban conquest of Afghanistan on Monday, painting an idyllic picture of a happy land where the clouds literally parted over Kabul after the U.S.-backed civilian government surrendered to the extremist insurgency.

The Global Times quoted Chinese nationals in Kabul who don’t see what everyone in the Western world is getting so worked up about:

“It is a sunny day in Kabul. The Afghan workers who have guarded the Chinatown for a whole night are sleeping. Breakfast stalls appeared again in the streets with smiling vendors, happy that no official may come to fine them for a while. Western troops are leaving hastily without the spirit they carried when they first came… Chinese businessmen staying in the country are witnessing historic changes,” Yu Minghui, a Chinese businessman who is staying in Kabul, Afghanistan, wrote on Monday – a day after the Afghan Taliban entered the capital city and US troops rushed to pack up and leave.

[…] “There are not too many Chinese companies in Afghanistan and many had returned one and a half months ago,” Yu told the Global Times, noting that he and some people chose to stay as they have signed contracts with Afghan departments and did not want to ruin their business reputation.

“After doing businesses here for more than 20 years, we have become acquainted with people from all walks of life and taken advice from them… We installed more fences and increased security. We suspended business for three days to wait for the new policies,” Yu said.

Other Chinese correspondents mentioned a few difficulties from the Taliban takeover, such as power outages and shortages of drinking water, but said they made adequate preparations. The Chinese embassy in Kabul advised Chinese nationals to remain indoors while the situation stabilizes. It reported no Chinese injuries and noted those who wished to return home from Afghanistan were long ago given transportation to China. 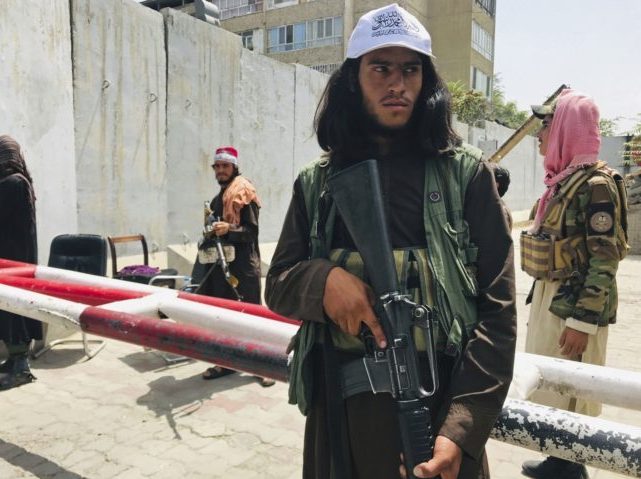 Taliban fighters stand guard at a checkpoint that was previously manned by American troops near the U.S. embassy, in Kabul, Afghanistan, Tuesday, August 17, 2021. (AP Photo)

The Global Times’ correspondents said they anticipated the Taliban would seek help with “infrastructure and production” from China and would desire healthy imports of Chinese goods.

The Chinese government offered its “friendship and cooperation” to the Taliban on Monday, portraying their speedy conquest of every major city as “the will of the Afghan people.”

Beijing reportedly extracted some promises from the Taliban in exchange for its support, including a secure border between Afghanistan and China and protection for China’s heavy interests in the Afghan minerals industry.

China did not recognize the previous Taliban government, but this time around it rushed to welcome and support the extremists. Al Jazeera on Tuesday ran through a list of reasons for the change in Beijing’s attitude, from its relish of a massive defeat for the United States through its Belt and Road economic interests in Afghanistan.

In theory, as Al Jazeera noted, China should be nervous about an Islamist extremist government with an inventory of captured American weapons setting up shop next to the restless Muslim province of Xinjiang, especially since China has long accused Xinjiang terrorists of being active in Afghanistan and obtaining military training there.

In practice, Beijing might see a Taliban hungry for Chinese economic support and political protection as more trustworthy protectors of the Afghan border than the corrupt and inefficient government it overthrew. China could also be more confident of its ability to control cross-border extremism than it was in the 1990s, having turned all of Xinjiang province into a maze of mass surveillance and concentration camps.