Zabihullah Mujahid, Taliban deputy minister of Information and Culture, boasted in an interview with Voice of America News (VOA) on Thursday that China is ready to pour billions of dollars into Afghanistan, even as the rest of the world attempts to isolate the extremist regime.

Mujahid said China requires assurances from the Taliban that its workers and assets will be protected, and in return, the Taliban expects Beijing to respect its sovereign rule.

“China is a neighbor and has a strong economy. We are trying to develop trade and economic relations with them. However, although we want China to have trade and investment with us, we will not tolerate any interference in our internal affairs,” Mujahid said.

The Taliban minister cited the Mes Aynak copper mine, the largest in Afghanistan and among the largest in the world, as “one of the important areas where [the Chinese] want to invest billions of dollars,” funding, he said, his regime sorely needs.

“We have promised them security for their investment and assets,” Mujahid said.

Mes Aynak also happens to be the site of a 5,000-year-old Buddhist city, a major archaeological find of potentially immense significance to Buddhist and Afghan history that has only been ten percent excavated: 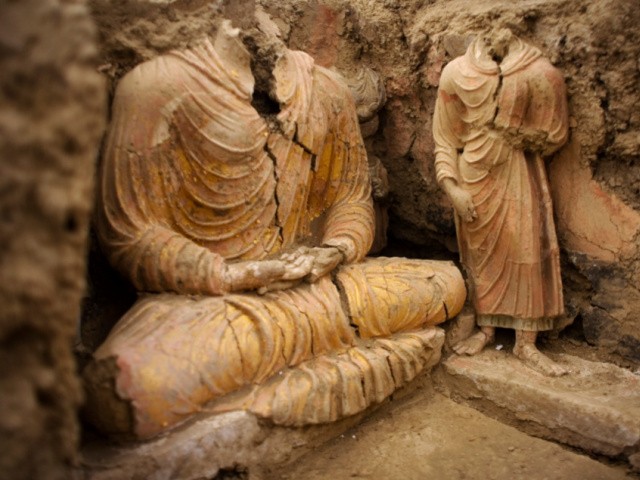 This photograph shows ancient Buddha statues inside a temple in Mes Aynak, south of Kabul, Afghanistan. This archaeological site is located at the world’s second-largest unexploited copper mine in Logar province. The Chinese government-backed mining company, China Metallurgical Group Corp., which won the contract to exploit the site, has given archaeologists three years to finish the excavations (AP Photo/Dusan Vranic).

Two Chinese state-owned companies secured the drilling concession at Mes Aynak in 2017, but the project was delayed by a shortage of coal and mineral reserves needed to support the operation. Work was also delayed by security threats from the Taliban insurgency and by hotly debated concerns that exploiting the mine would require damaging or obliterating the archaeological site.

VOA asked Mujahid about claims by the Islamic State that the suicide bomber it dispatched to attack a mosque in Kunduz last week was an Uyghur, the oppressed Muslim people of China’s Xinjiang province. Western analysts viewed the unusually specific identification of the suicide bomber as an effort by ISIS to drive a wedge between the Taliban and China.

“We have not talked to any country about this issue. All Daesh operatives are Afghans. There is no foreigner among them,” Mujahid told VOA, using another name for ISIS.