A Shiite mosque in northeastern Afghanistan was attacked by a suicide bomber during prayer services on Friday, killing at least 43 people and injuring over 100 according to local officials. The Islamic State swiftly claimed responsibility for the blast.

Photos taken inside the Said Abad mosque after the attack showed it littered with corpses and body parts. Local security officials said at least 300 people were packed inside the building when the bomber detonated his suicide vest.

Taliban officials told the independent Tolo News the death toll stood at 43 on Friday afternoon, while the United Nations Assistance Mission in Afghanistan said over 100 might have been killed. Reuters quoted two unidentified “health officials” who said the number killed was “likely between 70 and 80.”

“They were struggling to deal with the human remains scattered throughout the back yard of the mosque. They expect the death toll to further climb in further hours because they say many people who were injured are in critical condition,” an Al Jazeera reporter said of eyewitnesses in Kunduz. 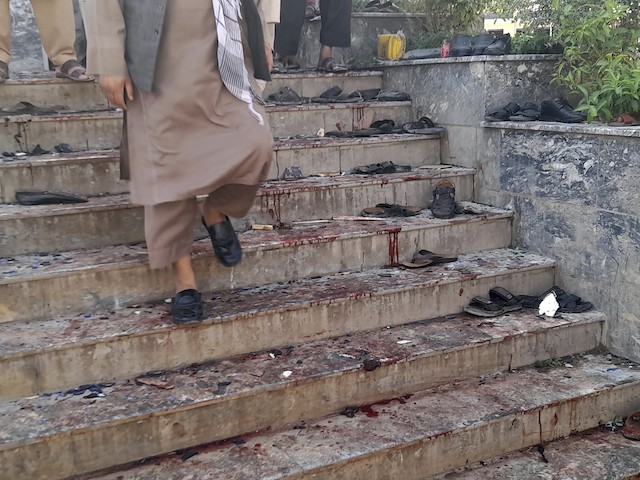 A blood-stained are seen outside a mosque following a bombing in Kunduz province northern Afghanistan, October 8, 2021. (AP Photo/Abdullah Sahil)

The Islamic State, whose semi-autonomous Afghanistan franchise is known as the Islamic State in Khorasan Province (ISIS-K), claimed responsibility for the attack using its channels on the encrypted messaging platform Telegram.

Shiite Muslims are a minority in Afghanistan, and Shiites are often targeted by the Islamic State, which practices an exceptionally grim and apocalyptic version of Sunni Islam. 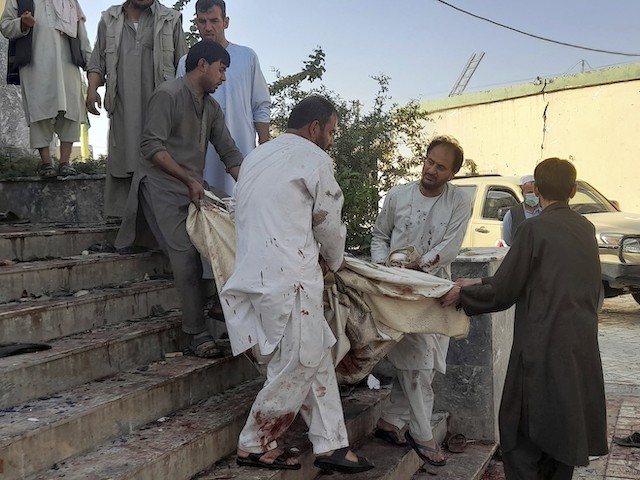 “I assure our Shia brothers that the Taliban are prepared to ensure their safety,” Kunduz deputy police chief Dost Mohammad Obaida told Al Jazeera on Friday.

Al Jazeera predicted the attack would “put more pressure on the Taliban” to deliver on their promise of “providing a safe environment for the Afghan people,” while ISIS-K appears to be sending a message that “they are far from defeated, that they are willing to further expand their footprint across Afghanistan.” 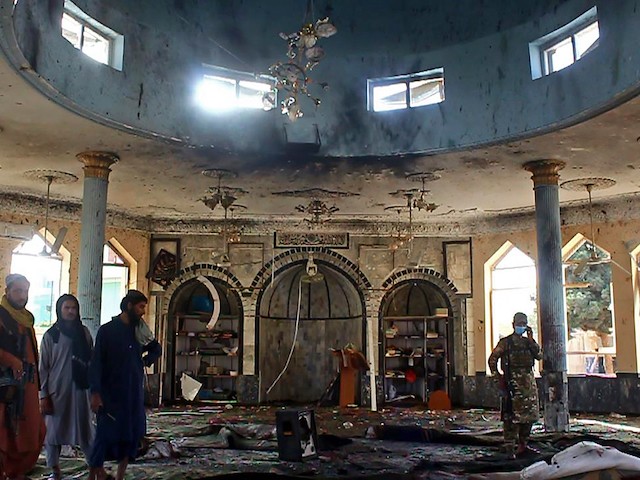 Taliban fighters investigate inside a Shiite mosque after a suicide bomb attack in Kunduz on October 8, 2021. (AFP via Getty Images)

All of Friday’s casualty estimates would make the Kunduz attack the highest body-count terrorist attack in Afghanistan since the bombing of the Kabul airport during President Joe Biden’s chaotic withdrawal, an attack that killed 13 U.S. servicemembers and 169 Afghans.

A mosque in Kabul was bombed last weekend, killing at least five civilians. The Taliban retaliated by raiding an alleged ISIS-K cell in Kabul and claiming to have killed all of its members.