As I write this, Barack Obama’s gal-pal Gloria Allred and the Boston Globe have aligned themselves with the Chicago Machine in a partisan crusade to launch an October Surprise against Mitt Romney. That we all know. What you might not know is that Allred’s client, Maureen Sullivan, the woman pushing to unseal the gag order on her own divorce records, is an embittered leftie, a Huffington Post “Super User,” and a vicious anti-Mormon bigot.

For what’s obviously a manufactured reason, Sullivan blames Mitt Romney for a divorce settlement she received during the early-nineties. Time’s Mark Halperin reports that while he was Chairman of Bain Capital, Romney was called to testify in the divorce proceedings between Staples founder (and Romney friend) Tom Stemberg, and Ms. Sullivan.  Supposedly, Romney’s testimony about the value of Staples at the time affected the eventual settlement agreement. Flash-forward over 15 years later, and Ms. Sullivan still hasn’t gotten over it.

Even though a gag order makes it illegal for Ms. Sullivan to publicly discuss her case, apparently this hasn’t stopped her online. Though more than a decade has passed, Sullivan’s used social media for years to lash out at her ex-husband, and especially Romney, using details of the proceedings that you would think fall under the gag order.

Coincidentally or not, the timing of Sullivan’s comments also coincided with Romney’s run for the 2008 presidency. That Ms. Sullivan would love nothing more than to derail Romney’s quest for the presidency is quite apparent, as her attacks ramped up in intensity over the years. All of which, of course, have culminated in her alignment with Allred and the Globe in the final crucial days of the campaign.

In January of 2007, at her own personal blog at Gather.com, Ms. Sullivan gave details about her divorce settlement to a reader in the comments section:

…it’s so true I was once married to a horse who turn CEO ans tried to “STAPLE” me. Looks like our former Governor Mitt Romney agreed about sending more of our young men & women into Iraq!! He was also the first person to give STAPLES big money and testified in my divorce for 5 days saying this was just a dream & a prayer. All the while they sign Goldman Sachs to take them public…Gosh, this is a story we need to talk over our lunch!! I will get in touch with you — I have had the flu all week. Make date tomorrow. hugs, mo-zy[.]

In later postings, she would intensify her public attacks against Romney, alleging he had cheated her out of the Staples fortune:

Mitty, you did, Tom did and his girlfriend Dola Hamilton Stemberg got in on the Initial Public Offering…Forgot to tell his wife of 10 years plus & the mother of his first born children. You guy’s were to busy trying to figure a way for me to sell the “little” amount of stock…So, you sold it to the Kuwait. So, the SEC would not be involved and the board would not have to worry about pricing there shares and paying forthem…off shore drilling. Did the Bushes set it up for you? BTW: You heard it here first. Bet, a hot fudge sundae if EVER Willard was selected as the GOP Prez…Guess who I strongly believe would be his running mate? JEB BUSH!! ~mo-zy  p.s willard, i bet you are so vey happy that Ifound my voice again…more to be revealed later. stay tune…

Here’s an especially vicious rant that moves from Romney to his father to her tired accusations she was cheated:

WILLIARD mitty flip/flop did not attend HIS own father’s funeral. How low can one go? He must had been in a “important” board meeting at Staples…Trying, to do the GRAINBELT or thinking it might be better to go IPO. Yeah, We Got It.” Mitty, you did, Tom did and his girlfriend Dola Hamilton Stemberg got in on the Initial Public Offering…Forgot to tell his wife of 10 years plus & the mother of his first born children. You guy’s were to busy trying to figure a way for me to sell the “little” amount of stock…So, you sold it to the Kuwait. So, the SEC would not be involved and the board would not have to worry about pricing there shares and paying forthem…off shore drilling.

In June, she accused Romney of lying about the value of Staples in his testimony at her divorce hearing:

Tom Stemberg, was *dating* her while we were still married to me!! I guess, that maybe one of a many reasons…Mitt & Ann Romney are best friends of Tom Stemberg. Aside, from Mitt Romney testifying for 5 days in my divorce case. Stating, “I do not hold much credibility to Tom Stemberg’s plan for Staples.” All the while they were speaking & then hired Goldman Sachs.. To take them public…Of course, on the Presidential stump …Mitt Romny & Tom Stemberg, did not sing this same song…Quite the opposite. They stated…”From day 1 I knew it was going to be a catagory killer just Toys ‘R” Us!!” Mitt Romney’s, word in 2008!! The good news, that I have found my voice…I am not afraid of Tom Stemberg & Dola Hamilton Stemberg…

Outside of what looks like a violation of the gag order with the public discussion of these details, at another site, in early 2012, Sullivan’s comments became more personal and embittered towards Romney:

…”Are you sure their is nothing that is going to come out about you?” Romney replied, “NOTHING!” Family man…I don’t think so…How could he do this to his son. What is he teachings to his children? I am beyond disgusted.

Looks Can Be Deceiving. Yes! Mitt & Anne’s boy’s (actually to old to becalled boy’s). Are quite handsome. I, pray they do not turn out like father.     Trust me … I know what I am speaking of. www.vanityfair.com an article on the soon -to- release book written by to Boston Globe Journalists. Should come with a warning. Please do not read this before going to bed… It may give you nightmare’s. My book will be out in two months.

Keep in mind, all of this is occurring over a five-year period and more than a decade after the divorce. Talk about holding a grudge. In-between all of this, Sullivan publicly lashed out at her ex-husband and his new wife with unproven accusations about child abuse:

I only know too well…my son was abused repeatedly by his now “former” step-mother. I would go into the courts — get a retaining order. OH’ I might add my former just sat and watch…He is a titan of industry. So, they got away with everything, until his recent divorce. He disowned my child for over 8 years — wrote him a 3 page letter stating “He could no longer be a member of the Stemberg family because you spoke to Mitt Romney about my wife hitting you…I am writing a book on child abuse…it can & does happen to everyone. Protect your child. blessings, mo-xy

All of this obviously paints one picture, but over at the Huffington Post, where Ms. Sullivan was active enough to become a “super user,” an even uglier side emerged. Though BuzzFeed Politics obviously buried the important information under a nonsensical headline that doesn’t connect Sullivan to Allred or today’s court proceedings, they have compiled screenshots of her recent (last few months) anti-Mormon comments: 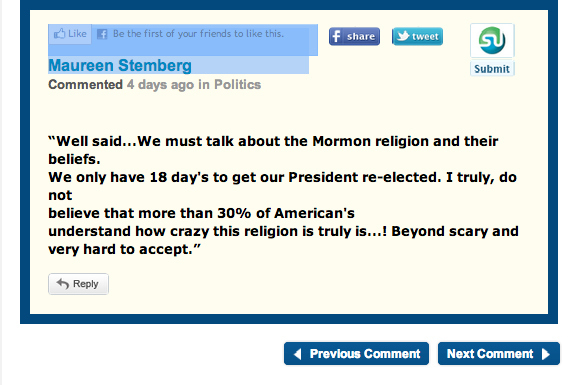 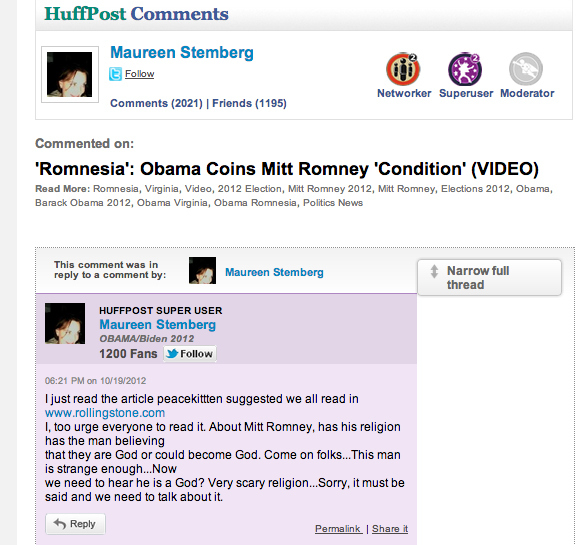 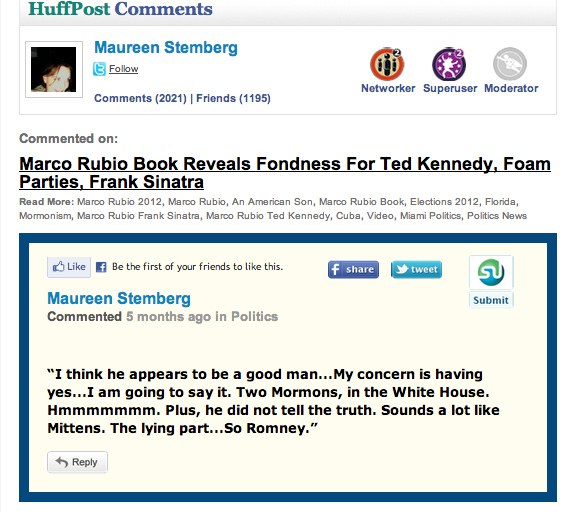 So publicity and money hungry is Ms. Sullivan, she tried to parlay her delusional vendetta into a movie!

DRAGON-LION MEDIA’s Edmund Druilhet has just announced the production of “The Maureen Sullivan Stemberg Story: A Portrait In Courage”, a documentary detailing the life of Boston native Maureen Sullivan Stemberg, the former and first wife of Staples founder, Tom Stemberg, who served as CEO and drove the company through its growth from infancy to what is now a worldwide superstore based on the idea of a home-office.

So what you basically have here is an obvious religious bigot on a two-decade personal assassination spree to enrich herself with both money and fame; and now, through Gloria Allred and the Boston Globe, she’s aligned herself directly with a Chicago Machine that specializes in unsealing divorce cases to take out opponents for Barack Obama.