A gay woman in Indiana has created a stir by coming out in favor of religious liberty, showing public support for Christian-owned Memories Pizza and their decision not to cater gay weddings.

Courtney Hoffman’s $20 donation to the pizzeria was symbolic, but her public stand has been significant.

The pizzeria had to close its doors after receiving a barrage of online threats when the owners said that their religious convictions would prevent them from catering same-sex weddings. One lesbian high school coach reportedly even tried to incite people to burn down the pizza shop.

As in similar cases, the owners said they gladly serve gay customers but would draw the line at catering a gay wedding.

“As a member of the gay community, I would like to apologize for the mean spirited attacks on you and your business,” Hoffman wrote in the note accompanying her donation. 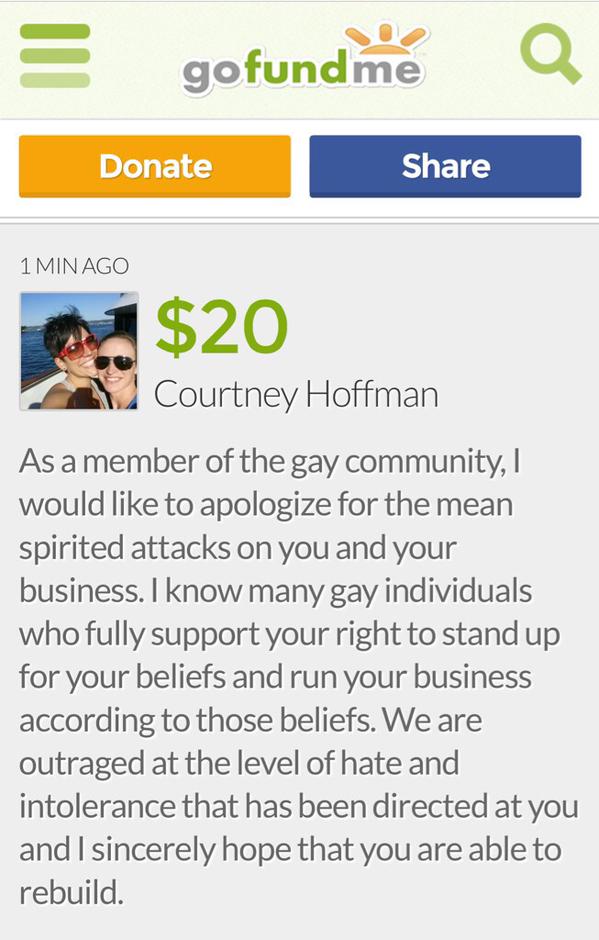 In a remarkable show of popular support, the Christian-owned pizzeria in Walkerton, Indiana, received $842,442 in donations in only five days, sent in by 29,161 different donors. This avalanche of support blew past the initial fundraising goal of $200,000.

The campaign also allowed gay people to disassociate themselves from those attacking religious freedom. While holding a different opinion regarding same-sex marriage, Hoffman said she supports people’s right to operate their business based on their beliefs.

“My girlfriend and I are small business owners, and we think there is a difference between operating in a public market space and then attaching the name of your business to a private event,” Hoffman said in a radio interview. “Like, if we were asked to set up at an anti-gay marriage rally, I mean, we would have to decline.”

Hoffman said the “horrible, hate-filled attacks” against the pizzeria and its Christian owners did not reflect the gay community that she has come to know and love.

Another gay man, Buz Smith, sent in a $250 donation to the Memories campaign as well, accusing the Democratic leadership of hijacking the gay community and promoting religious intolerance. Other members of the gay community wrote in applauding Hoffman’s gesture and backing up her stance. 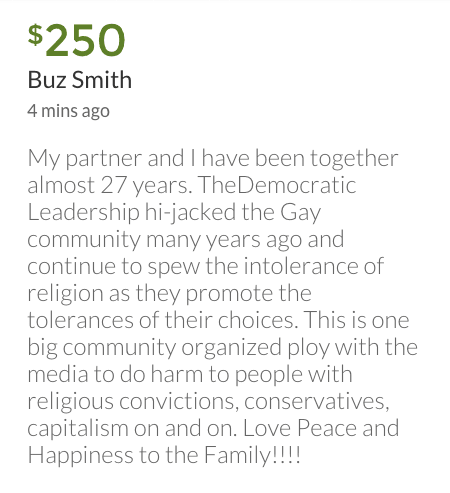 Hoffman said that the media attention made her nervous at first, but she was consoled that the responses to her donation were “so positive and amazing.”

“There’s this tendency to group people together — they are either one thing or they are another,” she said. “I just think there’s a lot of room for differences and similarities between all of these businesses, all of these communities, and if we can remember that differences don’t equal maliciousness.”

“Maybe we can move beyond threats of violence and have open discussions of the things that we don’t agree on,” she said.

Hoffman and Smith’s position in favor of religious liberty is not universally held among the gay community. After seeing how much money was raised by Memories Pizza, Jason Nguyen, an advocate for lesbian, gay, bisexual and transgender rights, launched a counter-campaign called “Love Is Stronger than Hate.”

Accusing the Memories campaign of promoting “discrimination and intolerance,” Nguyen used the same GoFundMe site that had been so successful for the pizzeria for his own campaign. Nguyen wants to show that he can raise more money than the pizzeria, and posted a goal of $1 million to promote LGBT equality.

Nguyen kicked off the campaign last Friday, but as of Tuesday morning it had only brought in $648 in donations from 22 people.