The poll was conducted by CNN and ORC International from April 16 to April 19 of 1,018 Americans nationwide, including 615 landline telephones and 403 cell phone interviews. Overall, the sample trended liberal, with 27 percent who described themselves as Democrats, 21 percent who described themselves as Republicans, and 52 percent as Independents or members of another party. The margin of error for the entire sample was +/- 3 percent, +/- 4.5 percent for the sample of Republicans and Republican-leaning Independents, and +/- 4.5 percent for the Democrats.

This poll is the first one to come out since Rubio announced he was running for President on April 13, and shows an improvement  from last month’s CNN/ORC poll (conducted from March 13 to March 15), when he was tied with Gov. Chris Christie (R-NJ) in sixth place. Rubio also performed the strongest among the Republican contenders in a head-to-head matchup against former Secretary of State Hillary Clinton.

Bush maintained his lead among the crowded Republican field, earning the support of 17 percent of respondents, a 1 point gain since the March poll. Walker also kept his second place position, losing a point for 16 percent. Paul and Rubio were tied in third place at 11 percent, a one point drop for Paul and a 4 point gain for Rubio. 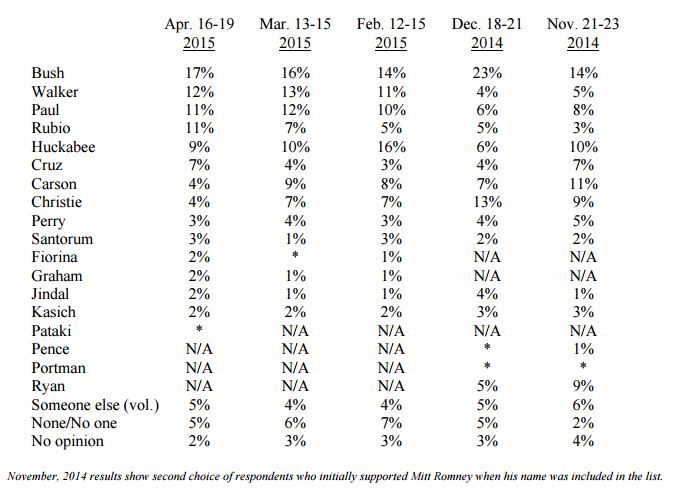 CNN/ORC poll results of Republicans from November 2014 to April 2015.

The poll also asked Republican respondents who would be their second choice for president. Bush and Rubio tied at 12 percent, Paul and Christie both received 11 percent, Cruz 10 percent, Walker 8 percent, Huckabee 7 percent, Perry and Carson at 4 percent. The rest of the field were in low single digits.

Later questions in the poll revealed why Bush continues to do well in these early polls, despite concerns from conservatives about his positions on education and immigration reform.

Regarding who “has the right experience to be president,” Bush was again in the lead with 27 percent; then Walker at 15 percent; Rubio, Paul, and Huckabee tied at 7 percent; Christie 6 percent, and Cruz 5 percent.

The poll respondents also thought Bush “would be the strongest leader,” with 21 percent choosing him; followed by 11 percent for Walker; 10 percent for Cruz; 9 percent for Rubio, Paul, and Christie; and 6 percent for Huckabee.

The only one of these value questions where Bush was not clearly in the lead was which candidate “best represents the future of the Republican Party,” where he was tied with Rubio, each receiving 18 percent. Other responses to that question included 10 percent for Paul, 9 percent for Walker, and 8 percent for Cruz.

Unsurprisingly, Clinton is still the frontrunner by a large margin among Democrats, receiving 69 percent support. Vice President Joe Biden was a distant second at 11 percent, and then a handful of contenders in the low single digits. When asked for their second choice candidate, however, 40 percent picked Biden, leaving him in a good position if Clinton falters.

Note that the sample was skewed toward Democrats; as mentioned above, the entire sample included 27 percent Democrats, 21 percent Republicans, and 52 percent Independents.

As Breitbart News reported, the first poll in Rubio’s home state of Florida after his announcement showed that he had surged to a slight lead over Bush for the first time, albeit within the margin of error. Cruz also enjoyed a bump in the polls immediately after his announcement on March 23rd, both nationally and in key primary states, and maintained that performance in the following weeks. This CNN/ORC poll, however, is the first one that was conducted entirely after Rubio’s announcement.