Democratic presidential candidates Bernie Sanders and Martin O’Malley came face to face with the tragic state of American progressivism last week, when an 11,000-strong rally of progressive activists was disrupted by #BlackLivesMatter protesters.

Activists marched into the room chanting protest songs before taking the stage in front of a bemused O’Malley to demand concrete commitments on police violence.

Never mind that O’Malley and Sanders are, among presidential candidates, by far the most sympathetic to the concerns of the Black Lives Matter movement: because they’re white, they cannot be trusted, and deserve to have whatever they’re talking about shoved off the agenda by thugs with placards.

It may sound racist and bizarre to be suspicious of candidates like Sanders and O’Malley on the basis of their ethnicity alone, but when you consider the primacy of identity politics in the progressive movement today, it really isn’t that surprising.

Since the 1970s, social psychologists have been aware that emphasising differences between groups leads to mistrust and hostility. In a series of landmark experiments, the psychologist Henri Tajfel found that even wearing different-coloured shirts was enough for groups to begin displaying signs of mistrust.

So guess what happens when you tell everyone that their worth, their ability, their right to speak on certain subjects and – shudder – their “privilege” is based on what they were born with, rather than any choices they’ve made or who they are?

This is what the future of progressivism looks like: blacks fighting gays fighting lesbians fighting trans fighting everyone else. It’s the iron law of victimhood-driven identity politics. Someone has to win, and everyone else has to lose.

Identity politics is universally attractive because it enables failures and weaknesses to be spun as the products of oppression and historical injustice. But for legacy castes, it can be humiliating and deeply unfair. Take MTV’s White People, for instance: an hour of television designed to produce discomfort in those with the wrong skin colour.

Safe to say, it’ll be a while before we see Black People on our screens.

But it also pits minority group against minority group. If the last ten years in the public square were defined by women ridiculing, criticising and demeaning men, the next ten are going to be even more depressing, and even more socially divisive. Welcome to the era of Minority Wars.

It sounds laughably ironic, but the modern progressive movement has argued itself into a position where people can be discriminated against on the basis of gender, skin colour and orientation.

That’s why you hear dismissive and in some cases even vituperative comments about “straight white males” in the media today: men are being ridiculed for things they cannot change about themselves. And it’s the political left doing the discrimination.

The future of the progressive movement will be akin to the nightmarish community of grievance-bloggers on Tumblr, where minorities, both real and imagined, engage in an endless competition for supreme victimhood status. You can already see it happening on social media and in spats between celebrities, such as this week’s hair-pulling contest between Taylor Swift, Nicki Minaj, Rihanna and Katy Perry. 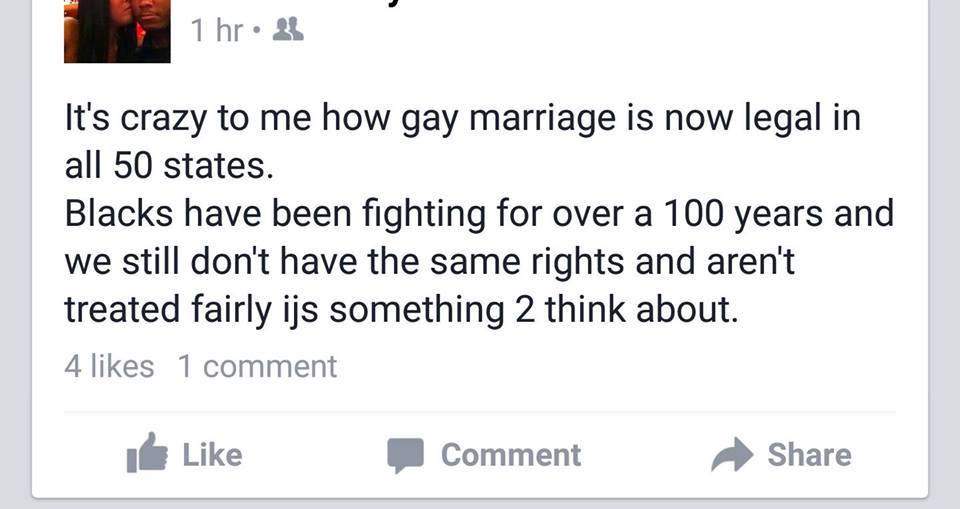 Taylor Swift has made the mistake of being white, so other white middle-class people pretend to hate her as a form of virtue-signalling. They’re telling the world what kind, sensitive, racially-aware and hip people they are by slamming Swift, and everyone is desperate to get in on the act.

Gawker, The Guardian and The Atlantic have already turned on her with racially-charged allegations – not forgetting to point out she’s a “bad feminist” for having the temerity to disagree with another woman, especially a black one.

White guilt and the synthetic outrage of Twitter mobs is harnessed by these publications for fury clicks. What’s really happening is that the self-described social justice icons of our generation are driving people apart and pitting minority against minority for profit and for their own twisted amusement.

The consequences for Left-wing politicians and media figures to the new Minority Wars will be disastrous. Ordinary people know this is a cruel spectacle cooked up by bored, spoilt, rich white middle-class bloggers in New York, and they see the damage it does to relations between ordinary blacks, gays and transsexuals.

As happened at the last election in the United Kingdom, that anger will be expressed at the ballot box. Before that happens, though, here are some of the skirmishes you can expect to see over the next ten years.

TRANSSEXUALS V. DRAG QUEENS
Drag performers have a rich history of taking personal tragedy and social oppression and turning them into a glorious pantomime, weaving gold from their struggles and often challenging preconceptions of gender. To some, however, this is seen as transphobic, a mockery of the oppression faced by transgender individuals who can’t “take off” their identity after the curtain comes down.

This has led to the banning of drag queens from performing at Scottish Pride events, to make them a “safe space.” What’s next? A trans man taking umbrage next time they see a woman wearing a trouser suit?

In the future, perhaps women will be prohibited from wearing so-called boyfriend blazers, sweaters or jeans, and society will comply with strictly gendered clothing rules in order to protect trans people from distress, in turn robbing us of our current increasingly liberal attitude towards the fluidity of gender.

I predicted all of this in May 2014, but it gives me no pleasure to see that I was entirely right.

BLACK WOMEN V. WHITE GAYS
A recent ruling by the UK’s National Union of Students addressed the alleged habit of gay men to imitate black female stereotypes, even going so far as to express a desire to “ban” this kind of behaviour from campuses.

The fact that a student body believes it reasonable to ban mannerisms might sound ludicrous, but that’s just how angry the black girls were at having their culture and vernacular appropriated by lisping white dudes who believe that being called ‘gay boy’ at school gives them a monopoly on oppression.

Except, wait, no: it was white people tabling the motion. (Admittedly, the article that kicked it all off was written by a black female student in TIME.)

Sassing your friends at brunch with ghetto put-downs doesn’t make you Rosa Parks, but it doesn’t make you David Duke either. The next logical step would be to ban white girls from getting cornrows – and of course that’s another dimension to Minority Wars: the ridiculous idea of “cultural appropriation.”

TRANSSEXUALS V. CISGENDER FEMINISTS
Otherwise known as the “battle of the lived experiences,” or “who suffered more to be a woman.” These groups will never see eye-to-eye because neither is capable of looking beyond what affects them personally. Cisgender feminists will remain adamant that rape culture and unconscious gender bias are the most crucial issues facing women today, while trans activists (who, let’s be honest, have probably faced far fewer unwanted advances) will maintain that being allowed into the women’s restroom is the civil rights issue of the age.

No concord will ever be reached between these equally thin-skinned, self-obsessed groups.

WHITE GAY MEN V. ANYONE ELSE IN THE LGBTQQIAROYGBIV*† SPECTRUM
A white gay man is still a white man, which goes some way to explaining why their faces and voices are the ones that dominate all LGBT marketing and news, say an increasing number of disgruntled disabled black lesbians.

There was recently a furore over the absolute invisibility of “people of colour” at Pride events, with some even accusing the gay community of white-washing the rainbow. Gay men are the masculine oppressors of the LGBT community. They, like the straight white men before them, will eventually be ejected from polite society.

I predict a split occurring, with white gay men stripped of their LGBT status, relegated to “allies” and forced to forfeit all rights to their victim narrative. The new “LBT” community will be led by a mixed race non-binary pansexual who prefers the pronoun “xhlee.”

BI-CURIOUS CRIPPLES V. GAY BARS
Where to start on this one? How about poor wheelchair access for starters, not to mention the ubiquitous musclebound go-go dancers, perpetuating a “hypermasculine, able-bodied ideal.” How is your average disabled guy expected to score in this kind of oppressive environment? I smell a lawsuit.

Being on benefits is not a shameful compromise of dignity for the new dole chic crowd, but a point of pride. “This country owes me,” they proclaim defiantly. Don’t even think about challenging them; they’ll hit you with all of the resentment and foul language they would reserve for their dad. If he’d stuck around.

INTERSECTIONAL FEMINISTS V. THE WHITE ONES
It only takes a few minutes of browsing the feminist internet to find an intersectional troll attacking a “white feminist” for failing to recognise the concerns of women of colour, typically abbreviated to WoC.

Old-school feminists like Julie Bindel and Germaine Greer have come under particular pressure from the newer intersectional wave, who accuse them of being transphobic, dismissive of WoCs (which, when you think about it, sounds alarmingly like “wogs”) and too sex-positive.

Early in 2014, the grievance brigade took to Twitter with the hashtag “#SolidarityIsForWhiteWomen.” Expect more of this if Hillary gets the nomination.

RIGHT-WING GAYS V. ISLAM APOLOGISTS AND THE TERMINALLY ANXIOUS LEFT-WING GAY ESTABLISHMENT
A group of gay men in Sweden has been accused of racism for promising to – bravely – march through a majority-Muslim area in the name of gay pride. You might think that Pride was all about sticking it to socially conservative homophobes, but apparently being racially and culturally sensitive is more important than the risk of being stoned, beaten or beheaded in your own country.

Don’t say you weren’t warned: Muslims will always rank higher than gays in the Left’s dysfunctional leaderboard of oppression, however disgusting Islamist attitudes to women and homosexuals may be and however many building they blow up.

THE WILDCARD: INVENTED IDENTITIES
You may not have noticed, but white, straight, financially secure people – the kind of people who work at Buzzfeed, Vox and Gawker – don’t have much of a place in the new victimhood hierarchies. Don’t worry, though! You can still be in the cool kids’ club. You just need to invent your own marginalised identity.

If you’re boring, you can just pretend to have a mental health problem. Self-diagnosis is on the rise, and even doctors have started to give up and let people believe they’re ill.

It’s become a common sight to see white, privileged activists talking at length about their depression, or their “Twitter PTSD.” It’s even more useful in Europe, where the state lavishes the disabled with extensive welfare payouts.

If you’re more creative, you can join the growing community of trans-racial people, which includes luminaries like Rachel Dolezal, Godfrey Elfwick, and me. Or perhaps you want to be an otherkin — an animal trapped inside a human’s body. Indeed, BuzzFeed recently had a submissions call for essays on “invisible illnesses.”

“I’m a bi-polar bear,” your professional bio could read. “Fibro-queer,” says another.

So you see, there’s no reason to fret. Even if you’re straight, white, and wealthy, there’s always some way to claim you’re being oppressed and at least make a good showing. Let the Minority Wars begin!