After the campaign of former Gov. Rick Perry (R-TX) had to suspend staff pay, Team Perry is remaining loyal and standing by their candidate.

Breitbart News has learned that out of the entire national campaign team, only one staffer has left, and fundraising efforts have started to pay off. Many of the campaign staff also took to social media on Tuesday to declare their support for Perry.

As Breitbart News reported, news broke late Monday that the Perry campaign staff were now all working as volunteers so the campaign can devote its resources to maintaining Perry’s busy travel schedule through the early primary states.

“Over the course of the day we’ve raised a good amount of money and positive activity on social media,” Perry communications director Lucy Nashed told Breitbart News. “Additionally we’ve even heard of a rancher from Amarillo called up the SuperPAC and donated $100,000. We will continue to do what is needed to compete in the early GOP states.”

Perry raised a little more than $1 million during his first reporting period, and a group of Super PACs supporting him took in an additional $16.8 million. SuperPACs can take in unlimited contributions but cannot communicate with the candidate they support once the campaign has officially begun.

The total fundraising put Perry in a fairly solid position, behind the combined fundraising numbers for the campaigns and PACs of Sen. Marco Rubio (R-FL), Sen. Ted Cruz (R-TX), and of course, former Gov. Jeb Bush (R-FL), who raked in over $100 million.

However, with only $1 million directly in Perry’s campaign account and the campaign unable to coordinate with the PACs after launching in June, the campaign had to prioritize their resources. Campaign manager Jeff Miller informed the staff last Friday about the financial situation and told them that anyone who needed to leave to take another job was free to do so with their blessing.

Also last Friday, the campaign began making calls to key supporters. Perry allies were told of the campaign’s financial needs, the plans to get through this rough patch, and asked to donate to support those efforts. Perry’s solid performance in last week’s debate and heavy travel schedule in the early primary states has been helpful in showing viability for the campaign.

The calls to supporters produced immediate results; Miller told Breitbart News that they were already receiving checks. “A lot of checks came in the mail [on Tuesday],” he said, although he did not yet have a dollar amount.

Perry’s social media accounts were also engaged in additional online fundraising on Tuesday, with posts on Facebook and Twitter saying, “We will continue the fight and we will win!” and asking supporters to donate.

The PACs were always planning to play a major supporting role for Perry, but as Breitbart News discussed on Monday with Opportunity and Freedom PAC senior adviser Austin Barbour, the news breaking about the campaign’s financial situation has moved up the timetable for the PAC to take action. The PAC had already hired a state director and deputy state director in Iowa, who will focus on building ground game for the Iowa caucuses.

Washington Post reporter Phillip Rucker reported Tuesday afternoon that a rancher in Amarillo, Texas who was a longtime friend of Perry’s had heard about the campaign’s financial woes, and had sent a $100,000 check to the PAC. That check is on top of the $14 to 15 million that the PACs currently have as cash on hand. “We’ve got plenty of money,” said Barbour. “The SuperPAC is not going to let Rick Perry down.”

In addition to ground game efforts, Perry’s PACs can buy television, radio, digital, and print ads and can host events where they invite Perry to deliver speeches. However, the core functions of the candidate’s travel and participation in official campaign events and debates must be born by the campaign, and the PAC cannot directly hire any of his campaign staff due to a waiting period imposed by Federal Elections Commission regulations.

This is why the survival of Perry’s campaign is highly dependent on the loyalty of his staff, and the fact that they have stuck with him is an extraordinary vote of confidence in their candidate. Realistically, Perry’s team have impressive resumes, with experience on other high level campaigns and as key staffers in the Texas Governors’ office. Perry’s early primary state teams include well-known key operatives with deep ties in those states.

Any of Perry’s campaign staffers could easily find work with another presidential or statewide campaign or major PAC, but only one person left, citing financial reasons. Everyone else, out of the several dozen employees in the Austin headquarters and early primary state teams in Iowa, New Hampshire, and South Carolina, is staying. Besides campaign manager Miller, this includes Nashed, speechwriter Eric Bearse, communications advisor Lexi Stemple, and the core communications and strategic team, some of whom were with Perry in the Governor’s office. Also staying on is Senior Advisor Avik Roy, who is nationally known as an expert in a variety of core conservative subject matters and was viewed as a particularly noteworthy hire for Perry to establish his gravitas on policy issues.

“I’m really proud of our team,” Miller told Breitbart News, praising them for being so “committed to the Governor.”

“They know what I know: that there is a path for Rick Perry, and it’s through the early states,” he continued. “We’re going to continue doing what we need to do. No one, no one can match him in retail politicking, which is what you need in these early states.”

Miller added, “we feel good” about their strategy moving forward, mentioning again that the fundraising efforts over the past few days had begun to pay off. “The people who know the Governor have no doubt about what kind of president he would make, and they want to help him,” said Miller, confident that they would be able to soon begin paying the staff again.

Many of the staffers took to social media to publicly declare their dedication to the campaign and belief that they would be successful. Perry is “is unmatched in his track record and his retail politic skills and because of that he will win,” tweeted Miller. Nashed tweeted that she “could not be prouder to be part of the hardest working team in the business,” which Miller retweeted with his own comment that he “could not agree more.”

.@GovernorPerry is unmatched in his track record and his retail politic skills and because of that he will win http://t.co/LxuzIK1wl7

Could not agree more. https://t.co/aYL2xll9Eq

Communications advisor Lexi Stemple added her own statement of confidence, tweeting that she “wholeheartedly” supported Perry and “his positive message for America,” and that she would continue “doing my part to help our team succeed in this long election.”

Whole heartedly support @GovernorPerry & his positive msg for America. Will con't doing my part to help our team succeed in this long elect

South Carolina Field Representative Eric Cocoran posted several supportive tweets, one of which was used in a Fox News Channel story about the status of the campaign. Cocoran, who was born in Ireland, described the campaign as “not a job” for him, but rather “a passion, a mission to save the nation that adopted me!”

I work for @GovernorPerry because I believe in Him. Not a job for me. This is a passion, a mission to save the nation that adopted me!

“Team Perry SC isn’t going anywhere…[we are] here to stay!” added Cocoran, no matter what the media reported. He also thanked God that he was a staffer for Perry “for such a time as this,” because “[t]he American people want a fighter, [and] Rick Perry is that man.”

The media can report whatever they want to but Team Perry SC isn't going anywhere. We believe in @GovernorPerry. Here to stay! #Perry2016

I thank God that I am a staffer for @GovernorPerry for such a time as this. The American people want a fighter, Rick Perry is that man.

Dane Nealson, Perry’s political director for Eastern Iowa, wrote on his personal Facebook page that he was “proud to stand with this man,” posting the video story of Perry’s friendship with former Navy SEAL Marcus Luttrell. 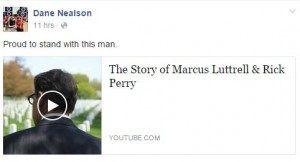 South Carolina staffer Daleta Frye was continuing to post positive posts about Perry on her personal Facebook page as well. 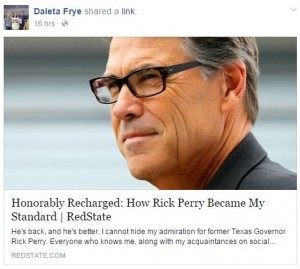 Whether this show of confidence from Team Perry will ultimately be remembered as a brave stand that succeeded against overwhelming odds like the Texian Army’s victory at the  Battle of San Jacinto during the Texas Revolution, or more like the doomed Spartan Army at the Battle of Thermopylae, remains to be seen.

For now, Perry is continuing his busy travel schedule, heading to South Carolina on Thursday and Friday, then to Iowa next week, back to South Carolina the week after, and then Iowa again the first week of September. Perry will also deliver a speech at the “Defending the Dream” Summit organized by Americans for Prosperity in Columbus, Ohio on August 22nd, an event that will draw a national television and online audience, and then a religious rally on the steps of the South Carolina Capitol on August 29th.