This horrible, upsetting picture shows a white stork whose beak was chopped off by a wind turbine in Germany. It subsequently had to be “euthanised” by a vet.

Though I’ve given him a name – Stefan – I think we can safely predict that his ugly and entirely unnecessary demise won’t generate nearly the same level of public outrage as did Cecil the Lion‘s. Or even Finsly the Tiger Shark’s.

That’s because, as Stalin might have put it, the killing of one mammal by a white, middle-class male is a tragedy. But the massacre of millions of birds (and bats) every year by greenies who say they’re doing it because they really care about the environment is a statistic.

Just how many of the world’s avian fauna are killed every year by bat-chomping, bird-slicing eco-crucifixes?

If you believe the conservation group Save The Eagles International, then the annual global death toll is jaw-dropping.

But this is shy of reality by a factor of ten, because 90% of casualties land outside the search perimeter and are not counted. We are thus really talking about an unsustainable death toll of 30 million birds and 50 million bats a year – and more still if we factor in other hide-the-mortality tricks documented by STEI.

But we’re unlikely ever to get an accurate figure because the wind industry takes such pains to cover up this embarrassing data. For example, last year, PacificCorp – an energy company which operates at least 13 wind energy facilities in three US states – sued the US Interior Department to prevent it releasing to the media the figures on how many birds have been found dead at its facilities.

PacifiCorp claimed the disclosure would cause “irreparable harm” to its interests.

Well, maybe. But oughtn’t that to be a matter for the public to decide? It could be that US taxpayers are absolutely fine about the vast subsidies they pay for bald eagles, golden eagles and such like to be sliced and diced by these Cuisinarts on sticks. Or it might be that they’d prefer to get their power from more eco-friendly sources like nuclear or shale gas.

But how are these people – taxpayers remember: so it’s THEIR money – going to reach an informed decision on the costs and benefits of this particular industry when its approach to full public disclosure is on a par with the Mafia’s. And, almost worse, permitted to remain so by the US government.

I’ve written quite often before about the environmental damage done by the wind industry. That’s why I patented the phrase bat-chomping, bird-slicing eco-crucifixes.

The reason I keep coming back to it is because it seems to me to go to the heart of what’s wrong with the environmental movement. I mean, if you want to bomb the global economy back to the Stone Age because you believe in “social justice”, one world government and wealth redistribution on a scale that makes Pol Pot look like Milton Friedman, just say so. But don’t try to greenwash your totalitarian misanthropy as concern for nature when it’s so painfully, insultingly obvious that you consider landscapes, wildlife and plants – humans, too, for that matter – to be acceptable collateral damage.

What I’ve noticed, whenever this issue arises, is that one of Big Green’s useful idiots will always crop up in the comments section, smugly pointing out that however many birds and bats are killed by wind turbines it’s not nearly as many as the gazillions wiped out by domestic cats or killed by flying into cars or plate glass windows or by other industries.

It’s a criticism which deserves an answer. Three answers, in fact.

1. This is weaselish whataboutery. You might as well say the police should give up devoting such vast resources to solving murders. “After all, it’s not like way, way more people aren’t killed each year in automobile accidents.”

2. The birds killed by wind turbines tend to be rarer and therefore less expendable. This is because wind turbines are often located in uplands where (protected) raptors congregate or on birds’ migratory paths. With bats, the situation is even more precarious. This article by Oxford University ecologist Clive Hambler has the details on birds:

In Australia, the Tasmanian wedge-tailed eagle is threatened with global extinction by wind farms. In north America, wind farms are killing tens of thousands of raptors including golden eagles and America’s national bird, the bald eagle. In Spain, the Egyptian vulture is threatened, as too is the Griffon vulture — 400 of which were killed in one year at Navarra alone. Norwegian wind farms kill over ten white-tailed eagles per year and the population of Smøla has been severely impacted by turbines built against the opposition of ornithologists.

Nor are many other avian species safe. In North America, for example, proposed wind farms on the Great Lakes would kill large numbers of migratory songbirds. In the Atlantic, seabirds such as the Manx Shearwater are threatened. Offshore wind farms are just as bad as onshore ones, posing a growing threat to seabirds and migratory birds, and reducing habitat availability for marine birds (such as common scoter and eider ducks).

Bats are what is known as K-selected species: they reproduce very slowly, live a long time and are easy to wipe out. Having evolved with few predators — flying at night helps — bats did very well with this strategy until the modern world. This is why they are so heavily protected by so many conventions and regulations: the biggest threats to their survival are made by us.

And the worst threat of all right now is wind turbines. A recent study in Germany by the Leibniz Institute for Zoo and Wildlife Research showed that bats killed by German turbines may have come from places 1,000 or more miles away. This would suggest that German turbines — which an earlier study claims kill more than 200,000 bats a year — may be depressing populations across the entire northeastern portion of Europe.

3. It’s all so entirely unnecessary. You can make a case for:

Domestic cats: they make quite pleasant companions. Well, if you like cats they do.

Buildings: yes, I suppose were we all to live in yurts and caves as the greenies might prefer there would definitely be a reduction in the avian death toll. But I think most of us would agree we actually quite like living in solid houses and working in office buildings where the light gets in and you don’t freeze in winter and where you don’t have to go to the toilet in a ditch.

Cars: useful for getting around. Not as handy over hedges as a horse but generally more versatile and easier to maintain.

The fossil fuel and nuclear industries: without them the global economy would grind to a halt.

Trophy hunting of animals like Cecil the Lion: it is an important part of the broader conservation programme that protects Africa’s game populations for the enjoyment of – ahem – future generations.

Killing Finsly the Tiger shark: a price worth paying to protect humans who – face it – are more sentient and deserving than giant swimming dustbins-with-teeth.

But the wind industry is utterly indefensible. If every single one of the world’s 250,000-plus wind turbines were to vanish tomorrow, the only people affected would be the rent-seeking vulture capitalists who profit by them at the public’s expense. There would be no environmental drawbacks for, as has been widely reported, wind turbines’ contribution to CO2-reduction is negligible. Nor would it make any significant difference to the global economy economy (other than to make it a hell of a lot more cheap and efficient).

Here’s why: the charts from the latest BP Energy Review showing more clearly than any words could exactly why the deaths of Stefan the Stork and his millions of feathered friends at the hands of the vile, rapacious, mendacious, bullying and entirely principle-free wind industry are so entirely unnecessary.

First, the paltry amount of electricity produced, even now, by wind. 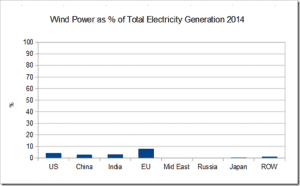 But that’s not the really shocking bit. As Paul Homewood reminds us, electricity only accounts for a fraction of total energy consumption. “The real contribution of wind power to energy needs, or for that matter emissions, is negligible.” 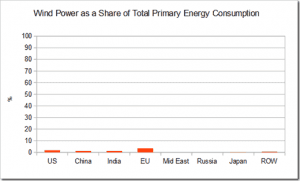 So much wildlife death, so much damage to the landscape, so much expense and human misery to so little effect.