Alabama’s Sen. Jeff Sessions is pro-American, and he doesn’t care if he’s called a “nativist” by post-national advocates for massive immigration.

“What’s wrong with that? … What’s wrong with putting America[ns] first?” he told a reporter for Roll Call, which published an article headlined as “Sessions Feels Vindicated by [Donald] Trump’s Nativist Surge.”

Sessions’ focus, however, isn’t on just the people born in the United States. He’s looking beyond ancestry and birthplace to include immigrants and their kids who’ve been welcomed legally into the United States. “We [politicians] represent the people who voted for us. That’s who our duty is owed to. To them…we should be doing what’s in their best interest,” he stated.

The mere existence of the would-be “nativist” slur shows the deep contempt that internationalists have for ordinary Americans, said a Hill staffer. “It should go without saying that the country exists to serve the interests of its citizens… so that fact that we have the [sneering] term ‘nativist’ implies that some people think the citizens shouldn’t have that priority,” the staffer said.

So far, populists haven’t developed their own term to trump the would-be slur of ‘nativist’ for the politicians who put Americans’ interests ahead of other people’s interests. Americans First, Americans’ Pride, citizenist, pro-American, and nativist are all being thrown about in conversation.

Sessions — and Trump — are pushing that conversation along. “It is important for people to see a politician to turn a word around on its head,” said the staffer.

Washington’s political class unfortunately caters to the post-national, globalist business groups, Sen. Sessions says. “They spend too much time in fundraisers with rich people and they don’t deeply understand the pain of middle-class, salaried people,” he said.

“The idea of somebody sitting in Wall Street, a million-plus dollars a year in income, saying ‘This is all right to bring in an unlimited number of people,’ to cause trouble and you know, financial difficulties for our schools and our hospitals? They don’t live with that. It’s easy for them to say that. Who are these people? Who’s speaking for the average person?”

Populist champion Donald Trump recognizes the issue, Sessions noted. “He met with us and certainly adopted a lot of the suggestions that I’ve been making over the years and all of a sudden he’s surged to the top of the polls.”

Trump is the first or second choice of roughly 40 percent of GOP primary voters. In contrast, the GOP establishment candidates are stuck below 10 percent or five percent.

But Sessions thinks there’s time for the GOP to redeem itself. “People like confession,” he said, offering up a script for politicians to get on the right side of history. He says:

We [politicians] need to say, ‘We’ve been too pure in this trade business. … You are right, American people — we have not defended you sufficiently on the world stage in these trade agreements and we’re going to negotiate tougher and we’re going to defend our interests more effectively. And yes, you’re right. You’ve been asking for 30 years to end this [immigration] lawlessness. We don’t have enough jobs for our own people. We’re not going to keep bringing in millions of people, legal and illegal, until you have a better chance to get your children, your family, a job. And I care about you, and I don’t care what Wall Street money says.’

Trump’s roaring success has been a surprise to the establishment, Sessions’ said. Now, the shocked GOP leaders and lobbyists “ought to be a little more humble in their political prognosticating,” he said. So far, however, “I haven’t had a lot of people [in D.C.] say I was right,” he said. 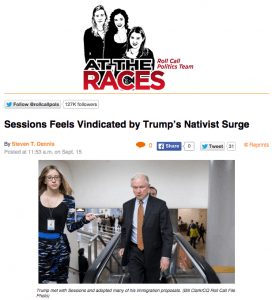