Frito-Lay announced Thursday that for a limited time Doritos will come in rainbow colors to show support for the LGBT community. Sales will go to It Gets Better, a non-profit group started by the infamous anti-Christian bully and bigot Dan Savage. 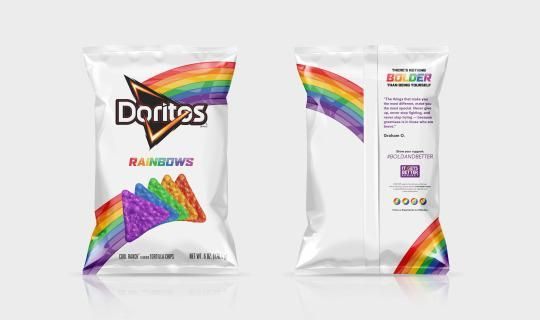 Savage has demanded Republican presidential contender Ben Carson to “suck his dick.” He’s demanded the same from Republicans Herman Cain and Mike Huckabee. Savage went on a smear campaign against Rick Santorum to destroy Santorum’s reputation in Google searches. The hate Savage has hurled at conservative Christians is practically endless:

[Savage] followed up that charming spectacle by stating he wanted to “f*** the s*** out of Rick Santorum.” He said that Republican gays were “f*ggots” who “grab their ankles, right on cue.” He tried to slander Saddleback Church Pastor Rick Warren by Google bombing a self-coined term, “saddlebacking,” meaning “the phenomenon of Christian teens engaging in unprotected anal sex in order to preserve their virginities.” He said in 2006 that Green Party Senate candidate Carl Romanelli “should be dragged behind a pickup truck until there’s nothing left but the rope.” He said in 2011, “I wish the Republicans were all f***ing dead.”

In 2000, while sick with the flu, Savage licked doorknobs in Gary Bauer’s campaign office in the hopes of making the Republican presidential candidate sick.

It should come as no surprise then that President Obama is closely aligned with Savage.

As recently as today Savage tweeted out the lasted in a relentless string of Tweets designed to sexually debase Santorum:

I’m not a fan Rick Santorum—but I am a fan of rhyming verse… https://t.co/dLVm4X8t6Y

The rainbow color of the Dorito chips represent the LGBT rainbow flag, a symbol now widely seen as one of anti-Christian hate and bigotry.