House Ways and Means Committee chairman Rep. Paul Ryan (R-WI) and his friends have scheduled a Speakership election victory party for Thursday evening, even though he has not won the floor vote.

“The pleasure of your company is requested at a Reception Honoring the 54th Speaker of the United States House of Representatives: The Honorable Paul D. Ryan,” the invitation reads.

A copy of the invitation—obtained by Breitbart News—was sent to schedulers in all House Republican offices.

The Paul Ryan victory party will be held at the Library of Congress’ Jefferson Building, from 6 p.m to 9 p.m. The tickets will be picked up at the National Republican Congressional Committee.

There is still an off-chance that Ryan could be defeated on the floor, or forced to win a second ballot. But with the surrender of the House Freedom Caucus, the chance of a reverse is not likely at this time.

The arrangements are being handled by The Townsend Group, which is a private financial advisory firm. At least one of its staffers, Jake Kasten, helps run Ryan’s Prosperity Action PAC. The invitation is for members of Congress and their spouses, and RSVPs are required by noon Thursday. 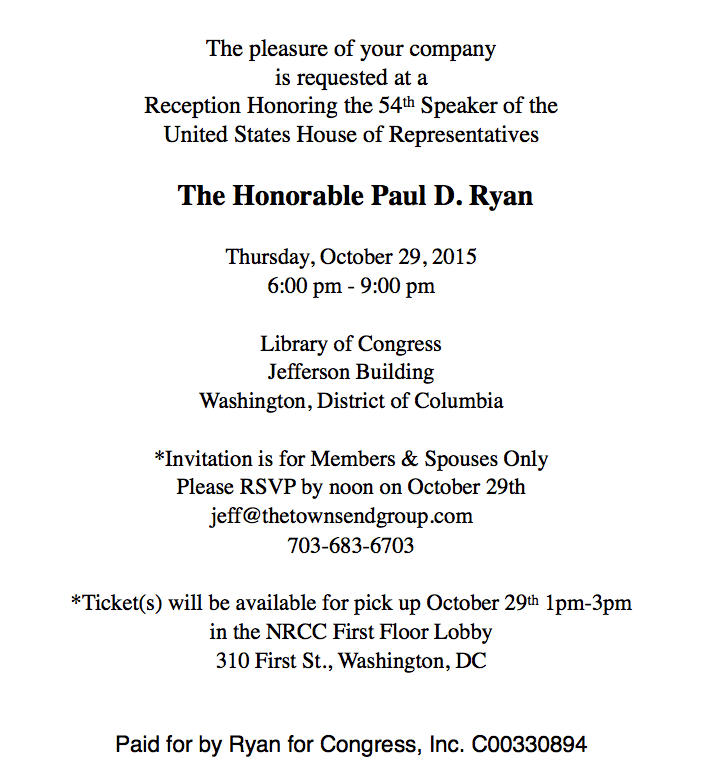