A new study has examined the political leanings of some of the top coffee distributors in the United States–and, perhaps unsurprisingly, Starbucks is the most liberal. 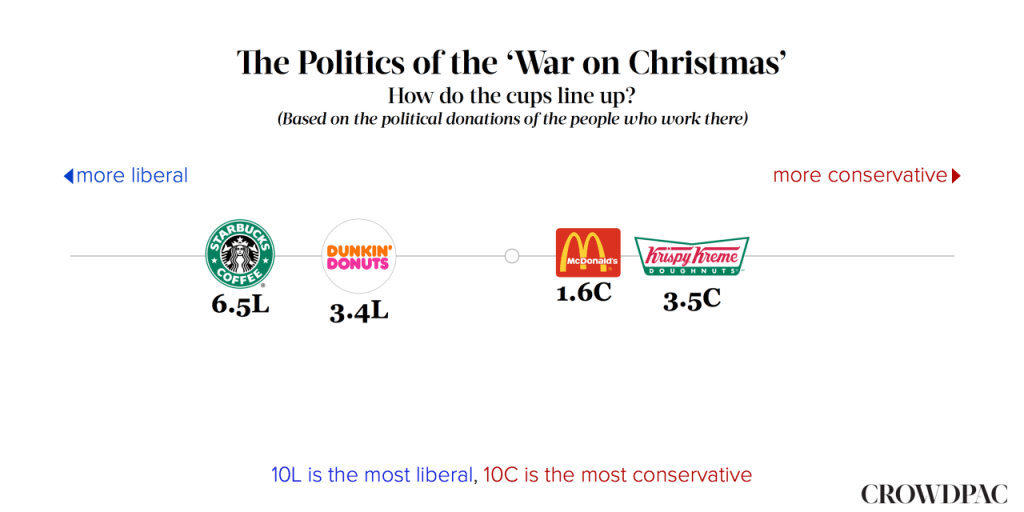 Politics of War on Christmas – Crowdpac

“We analyzed our historical database, containing every political contribution since 1980, and found that just as you can get your coffee dark, with cream or with room, you can also get it in various shades of red and blue,” a Crowdpac spokesperson told Breitbart News.

According to the campaign finance data,  Starbucks sits at the most liberal end of the spectrum with a Crowdpac score of 6.5 L–occupying the same space as Hillary Clinton. McDonalds and Krispy Kreme clocked in as the most conservative coffee distributors, with moderate Crowdpac scores of 1.6C and 3.5C respectively–politically similar to Donald Trump and Chris Christie.

Starbucks has come under fire for removing all symbols of the holidays from its coffee cups for the upcoming holiday season, opting instead for plain, solid red-colored cups. The backlash even prompted Republican presidential candidate Donald Trump to suggest a boycott of the world’s most famous coffee chain.

For its part, Dunkin’ Donuts released its own holiday-season cups this week. Social media users lauded the company’s new cups for retaining their Christmas imagery.