Breitbart News received an email and images from a Donald Trump supporter who was at the event and saw firsthand how the shutdown of Donald Trump’s Chicago rally happened. We have removed their name out of concern for their safety.

I was very excited to go and headed up to Chicago and arrived at the event around 2:00 pm.  Parking in the garage next to the event, I walked over and was directed by police a different way due to the crowds of protesters that were right outside.  I had to walk to the other side of the large parking garage to get onto the street to join the other attendees. 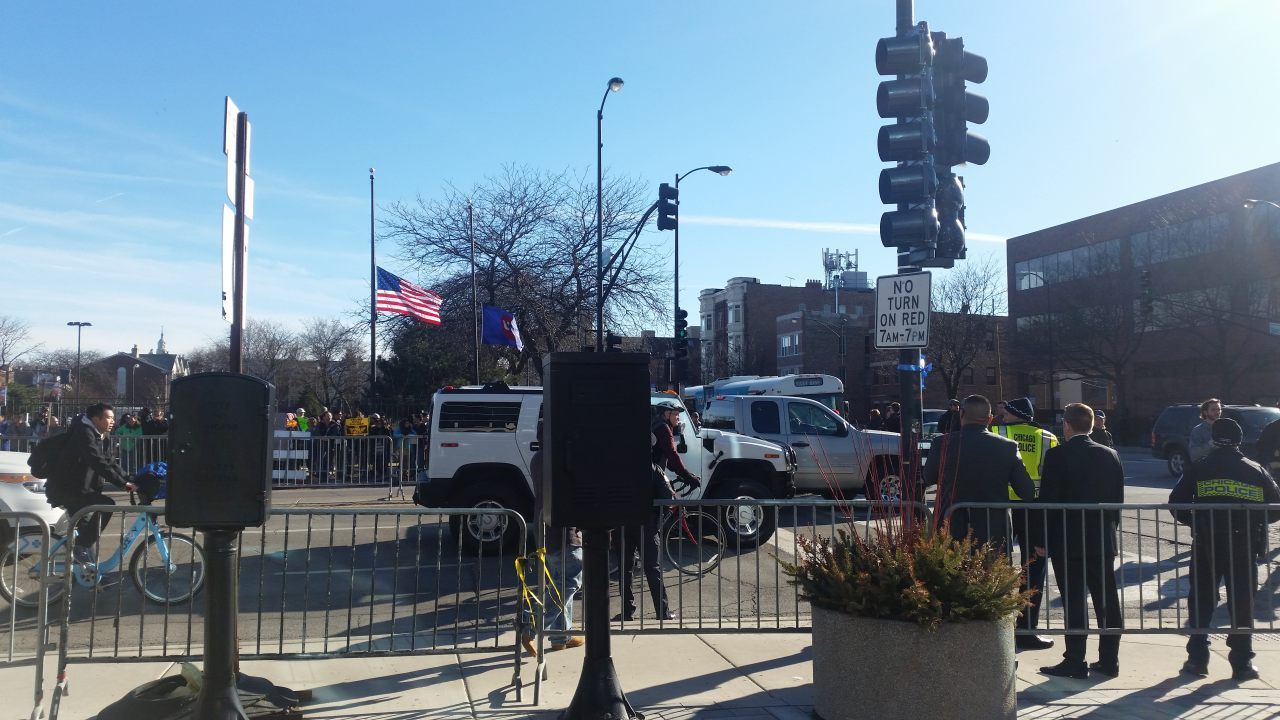 As I got into the line, I started talking with other people in line near me and really enjoyed hearing their reasons for supporting Donald Trump and why they wanted to be here at his rally.  The line wrapped around the building and continued growing while we stood there. Doors were to open at 3pm. People that I spoke to were very friendly, some were small business owners, college students and other occupations.

I noticed three young men in white t-shirts that they had written on with a black marker.  Their shirts said that they were Muslim and were suddenly being interviewed by a TV station.

Going through security, I noticed quite a mix in the population in line at each Secret Service checkpoint.  People were laughing and happy to be at the event and were eager to get inside.

When I walked in, I was surprised that I was able to go to the from area near Trump’s podium was on stage. I was about 12 people from the front of the stage initially when I got in there.  During the next few hours, a group of younger people dressed in black outfits and acting very determined, kept being very pushy to get farther up to the stage area.

I even had joked that they were so tall that I could not see the stage well anymore.  I was holding a Trump sign and stood there talking with other people who were sharing their stories.

When I smiled at several of those people now right next to me who were acting “odd”.  I heard the one girl say, “Wow! Now the world is going to know me! I’m gonna be famous!”  Since we were so close to the cameras from the new stations, I thought she meant because of that.  She ended up being part of a group of about 20 young people who joined arms and pulled out rolled up clothes that they had hidden in their stuff and started yelling at the crowd around me.  This happened right after they announced that the event was being canceled.  They held on to each other and were yelling at the other people there very rudely. 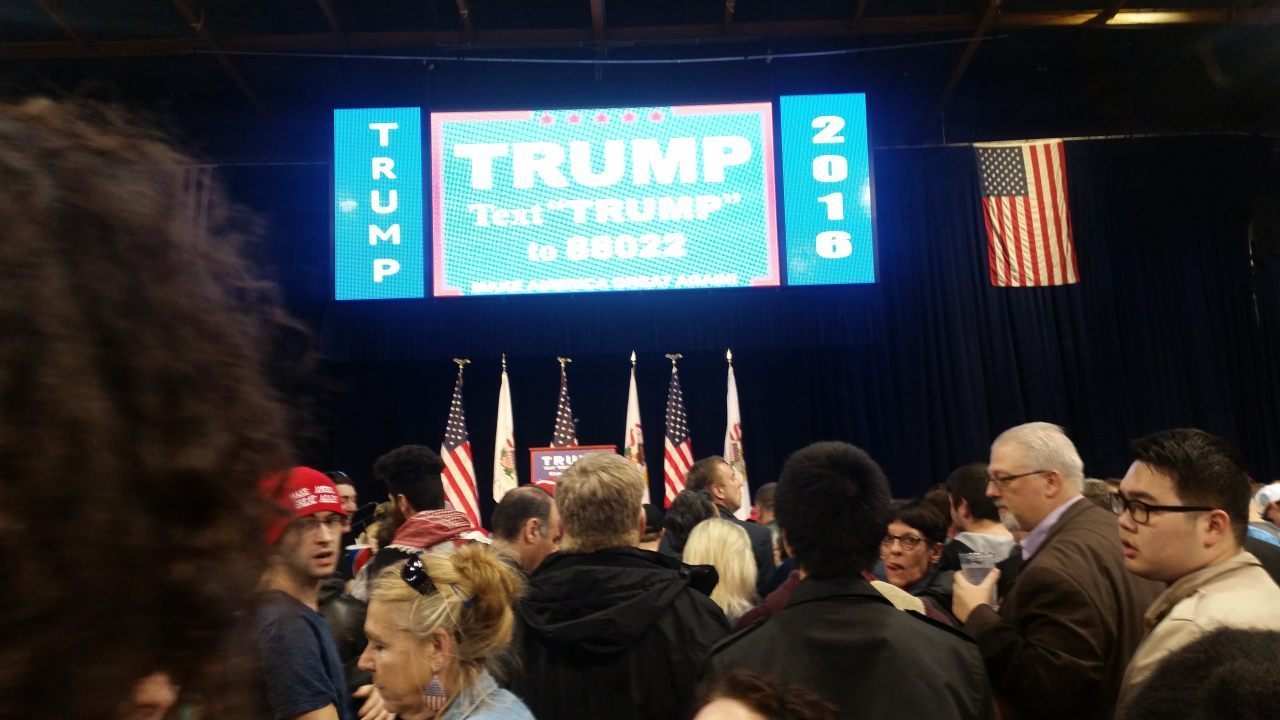 I was able to get to the very front of the rally area once people were told no rally was going to happen. The crowd cried out in disbelief.

After waiting till around 6:25 to cancel the event, people at first thought it was a joke…or that they would get the unruly protesters out of the building …and then continue the rally.  When I turned around while at the very front line by the stage now, I saw the guy rush for the stage and get  stopped..while he kept trying to wrestle out of the grip of the Secret Service agents. The crowd around me looked on in disbelief as this guy kept trying to get out of their grip again and again!  I thanked the Agents for keeping all of us safe tonight and told him what I recognized him from the Florida Trump rally last week as  one of the guys who removed the idiots who were doing the gang signs, feeding each other, flipping the camera off and saying cuss words and more!

Another announcement was made telling people they needed to leave the event.  I wanted to see what would continue to happen and I watched as more protesters said loud and angry things to the rally attendees.

As the police continued to direct the flow up the stairs and outside the building, I saw the enormous crowds outside and saw the lights and heard the screams and name calling!

The police tried to provide a barrier for us to walk away from the protesters but some chose to call us names..even one in a plastic Obama mask! I could not believe the cuss words they used towards us..for having come to a political rally for our candidate.

Once I got into the parking garage, I was stuck in there with all the other drivers for over an hour as the protesters were successful in blocking us in! We were “hostages” of those idiots.

I took video from the 3rd floor at my car looking down at the protesters. A police man told me to get away from the edge since they had people throwing bottles at the cars already.

The protesters still screamed and called us names as each car finally was able to leave the parking garage!. The police lines were very thick and also included police on horses.  As I drove through that gauntlet, I was scared not knowing if my car would be a target and they tried to intimidate everyone!

I had several protesters run up to my car and threaten me at the stop light right past where the police line ended. That was scary and I pumped the gas and drove away.

I ended up going about 25 minutes out of my usual way out of that area in Chicago..so I wouldn’t continue to be a target of those obnoxious protesters.

This chaos will not deter me. I will go to the next Trump rally when he reschedules it.