Kristi Merrit dressed up as a pirate and asked on Facebook “Does this make me a pirate?”

In another post, the mom dressed up as Seattle Seahawks quarterback Russell Wilson and asked, “Does this make me Russell Wilson?”

In another post, she proudly shows a dress, high-heels and a purse with the question, “Then how does this make me a woman?”

Her message was clear: “A man in a woman’s clothes does not make him a woman. Men should not get to be in our bathrooms or lockers! #?justWantPrivacy#? BeBold.”

Her memes went viral, shared by more than 100,000 at his point, among them angry transsexuals who complained to Facebook. One complaint accused her of having nudity in her memes, which led Facebook’s content-police to intervene against her.

“Facebook is trying to make me remove this post, they are trying to say it has nudity in it. Here’s what’s happening. The people who are trying to censor me are reporting it as having nudity in it, which it clearly does not,” Merritt wrote.

So Facebook asked her to take them down and then banned her for a week. 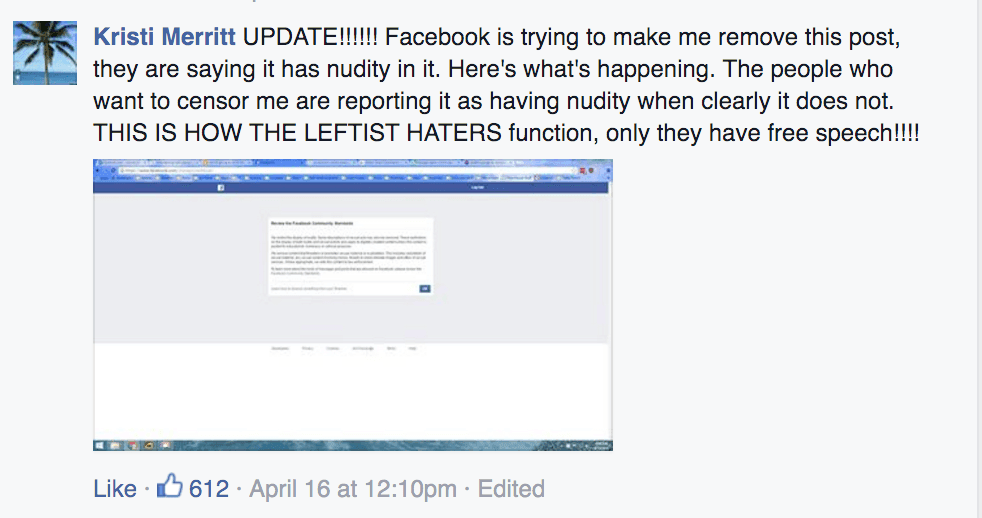 The Lakewood, Wash., mom says she is growing frustrated with the progressive push to let the few transgender people — but not the many normal people — decide whether people of the other sex are allowed into their bathrooms or changing rooms. Washington State is considering such a bill now.

According to Census data, only 90,000 people in the US have changed their name for sex-change reasons. This means Washington State is considering changing their laws governing 7.6 million people to comfort slightly more than 2,000 people who think they have the wrong genetics and genitalia.

A new poll shows the public is increasingly opposed to the slow-motion nationwide effort by progressives and by companies to outlaw and stigmatize any recognition of the differences in abilities and attitudes among men and women. Even some gay activists are now wondering whether there should be a divorce between the gay movement and the progressives’ campaign to destroy what they call the “gender binary,” or the different and complementary nature of men and women.