Hillary Clinton’s progressive Democratic Party invited an Islamic fundamentalist who rejects any acceptance of homosexual sex, and who is also an religious ally of the Muslim Brotherhood jihad group, to open its convention on Tuesday.

The party’s welcome for the radical Islamic preacher spotlights progressives’ repeated promotion of diverse foreign cultures — such as the Spanish-speaking illegal immigrant on Day One — and showcased the party’s deep condescension toward the indirect political power of religious ideas to promote or demote justice in society.

The African-American Islamist, Sherman Jackson, has defended jihad and pre-modern Islamic punishments, and has allied himself with at least two Islamic groups that were tied into a criminal effort to raise millions of dollars for the Jew-hating HAMAS jihad group.

For example, in a 2009 lecture, he insisted that Islam will never accept homosexuality as legitimate and equal, and he notably declined to condemn orthodox Islam’s Allah-dictated death penalty for homosexuals. “Make a place for people who have a [homosexual] problem, yes. Make a place for people who want to redefine Islam, no,” said Jackson, who also calls himself Abdul al-Hakim Jackson.

Under orthodox Islamic law, people who have homosexual sex are to be killed either by being thrown over the side of a building or buried under a collapsing wall. As self-professed Muslims, the Islamic State’s acolytes have killed numerous homosexual Arabs by pushing them off of tall buildings.

Still, in many Muslim countries, officials generally ignore gays and ignore homosexuality if it is kept private.

Jackson has also served as member of the Fiqh Council of North America, who sets orthodox Islamic doctrine, or Fiqh, for observant, Sunni-style Muslims in the United States. In 2003, council’s president issued the group’s policy on homosexuality, backing exclusion and the death penalty;

Verily, the punishment here is the burning of both homosexuals (the actor and acted upon) or stoning them with rocks till death because Allah Most High stoned the people of Lut [Lot in the Bible] after demolishing their village …

In brief, verily this conduct, whether it comes from two males or females, is considered an abomination and a crime. Therefore, what these lewd people allege is not accepted by Islam at all and is rejected completely. Moreover, the fact that some religious groups, due to being pressured, have allowed their followers to engage in this conduct cannot be considered as justification for prohibited actions. There is precedence in history of some people changing their religions by adding and subtracting from them. As for Islam, it is unequivocal in this matter, for it does not accept any bargaining in any situation whatsoever.

The Muslim needs to take precautions against these deviants and not to give them any opportunity to mix with and corrupt their children. Furthermore, they are neither fit to establish masajid [mosques] and frequent them, nor are they fit to lead those who frequent the masjid whomever they may be. More importantly for them is to seek a cure for themselves from their own illness, to purify their souls from whatever filthiness became attached to it, and return to a sound path instead of mocking and ridiculing the sentiments of Muslims. 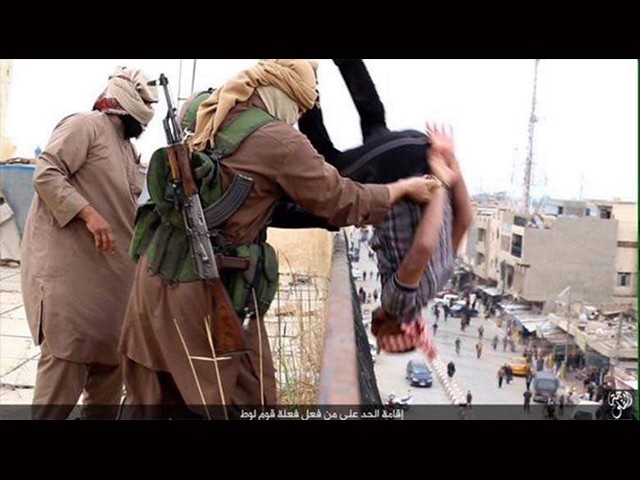 Jackson has worked closely with the Islamic Society of North America, which is the U.S. religious arm of the Egypt-based Muslim Brotherhood. The brotherhood’s affiliates include the Jew-bating HAMAS group, which received $12 million from U.S.-based Muslims, according to evidence released during the Holy Land Foundation Trial in 2007.

HAMAS member regularly shoot unguided rockets towards Jewish civilians in town and villages throughout the democratic state of Israel.

Jackson has also been a board member of the North American Islamic Trust, which owns and funds most Sunni mosques in the United States. Both ISNA and NAIT were identified as un-indicted conspirators in the Holy Land terror-funding operation.

When opening his benediction, Jackson began by using an Arabic phrase, Bismillah ir-Rahman ir-Rahim. In English, the phrase means “In the name of Allah, most Gracious, most Compassionate.”

However, Allah’s book of commandments, the Koran, urges unending uncompassionate war against non-Muslims until Islam takes government power throughout the world. Under Allah’s rules in the Koran, all non-Islamic ideas — homosexuality, free-speech, sexual freedom, sexual equality, democracy, science and many commercial and private activities — must be violently subordinated to a Saudi-style Islamic theocracy.

However, most U.S. progressives prefer to dismiss the power of Islamic ideas, amid the obvious sincerity and murderous seriousness of orthodox Islamic believers living in the United States or in Europe.

That dismissal is different from progressives’ contempt and hatred for Christianity — a mere “faith tradition” — because Christianity’s world-changing, pro-democracy, pro-freedom, pro-science ideals and its indirect political power has already proven its ability to constrict progressives’ power.

Jackson’s appearance at the convention also reflects the party’s self-interest in expanding federal authority to counter the chaos of government-imposed social diversity, and its close alliance with the loose network of Muslim Brotherhood groups in the United States. Under that alliance, Obama’s White House is aiding the network in exchange for support from Muslim voters on election days.

That political relationship, however, is rocky, partly because the brotherhood groups don’t want to cooperate with Obama’s domestic anti-jihad strategy