John Harwood of CNBC and the New York Times, who moderated one of the Republican presidential primary debates last year, corresponded often with Hillary Clinton campaign chair John Podesta, even congratulating her on primary wins, according to emails released by Wikileaks.

On July 24, 2015, the day that the Times and other news outlets reported that an investigation by the inspectors general of the State Department and other federal agencies had concluded that Clinton had classified information on her private email server,  contrary to her earlier public statements, Harwood emailed Podesta and Clinton aide Jake Sullivan, reassuringly: “set aside process – if there’s any specific/plausible suggestion of nefarious email @HillaryClinton was trying to hide, I haven’t heard it.”

On Oct. 1, the day after the State Department released another batch of Clinton’s recovered emails, Harwood emailed Podesta: “how are you feeling about where things stand?” Podesta replied: “Battered but ok.” Harwood replied: “Sounds right to me.”

Later that month, on Oct. 28, Harwood would go on to moderate the third Republican primary debate, and delivered a performance so obviously biased that even liberal commentators had to admit he had proven conservative suspicions correct. Harwood did not ask about Clinton’s emails.

Other emails, including an invitation for lunch, appear more innocuous. Some look simply like pitches for interviews. Regardless, they reveal a close relationship between Harwood and Podesta — and apparent political support from Harwood.

On Jan. 28, 2016, for example, Harwood emailed Podesta to report that Clinton had done well at an event in Iowa: “She was good here in Newton.”

And on March 14, 2016, Harwood emailed Podesta: “how are you feeling about tomorrow?” The next day, March 15, was an important Democratic primary day, when Florida, Ohio, Missouri, Illinois, and North Carolina voted.

Clinton won all five contests — though by a narrow margin in Missouri and Illinois Harwood wrote again to Podesta: “Congrats – pretty strong.” Podesta then replied to Harwood in the early hours of March 16: “Yup. Feeling good.” 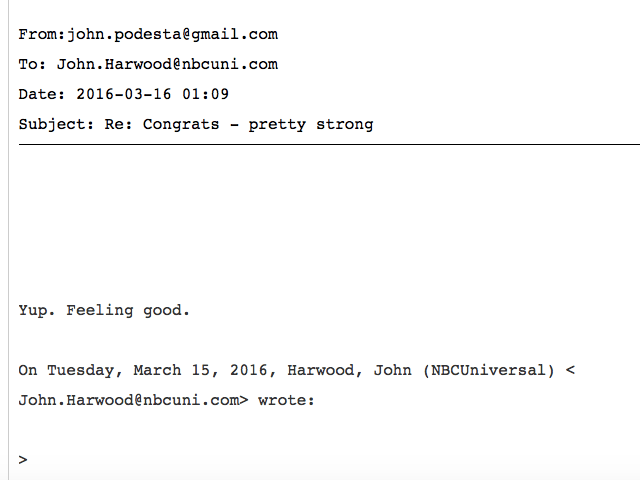 Revelations from the Wikileaks email dump are ongoing — though the media have shown a curious reluctance to highlight them, focusing instead on leaked video of Donald Trump joking about groping women in 2005.