NEW YORK — Speaking during a recorded phone conversation with his alleged mistress Gennifer Flowers in December 1991, Bill Clinton stated of rumors that he had had an affair with an unnamed woman: “She was so good looking I wished it was true.”

That conversation took place two months after he announced his bid for the presidency.

In another recorded conversation from one year earlier, Clinton reacted to a list of five women with whom he was accused of having had sexual relations by joking, “I’ve got good taste.” In the conversation, he denied that he slept with the women on the list.

Clinton was specifically reacting to Flowers recalling her response after she learned about the list of women. “You know what I said? I said, ‘At least he’s an equal op…opportunity f*cker!'” stated Flowers in the recording.

In an interview airing Sunday with Breitbart News and this reporter’s weekend talk radio program, Aaron Klein Investigative Radio, Flowers reacted to those two sections of the tapes, explaining she felt that Clinton was acting like a “jackass” and was being demeaning to women.

From December 1990 to December 1991, Flowers famously recorded a series of conversations with Clinton during the period he was Governor of Arkansas and considering a run for the presidency.

On October 1991, Clinton announced his bid for the Oval Office, with rumors of extramarital affairs threatening to derail his campaign.

Flowers recently provided this reporter with complete original cassette recordings of her taped conversations with Clinton, recordings that take on renewed significance as the issue of Clinton’s alleged treatment of women has reemerged during the 2016 presidential campaign. 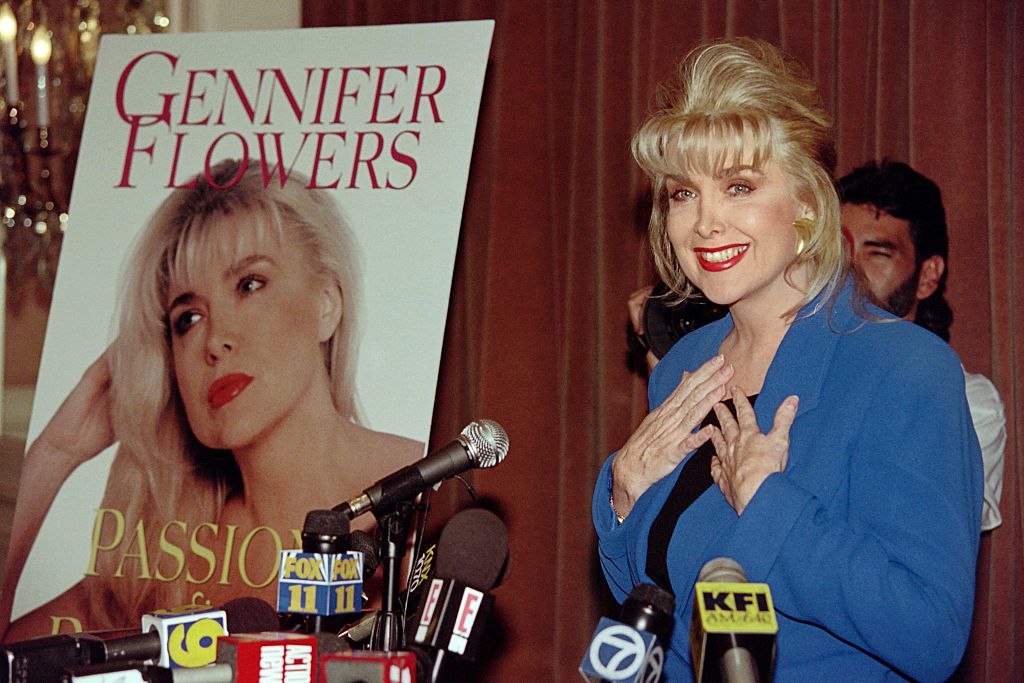 By December 1991, rumors were swirling around Arkansas and nationally that Clinton had had affairs with several women. During a portion of the tapes recorded that month, Clinton discussed claims about his relationship with one woman, whose name was deleted for privacy reasons.

Here is a transcript of those remarks:

BC: The one I allegedly had an affair with?

BC: The only time I ever saw her was at the inaugural. She was so good looking I wished it was true. (laughter)

In a previous conversation, in December 1990, Clinton reacted to a list of five women with whom he was accused of having had affairs by joking, “I’ve got good taste.”

At issue was a lawsuit filed by former Clinton insider Larry Nichols, who claimed he was improperly dismissed by Clinton from a state job.  In the lawsuit, Nichols alleged that Clinton diverted state funds to engage in extramarital affairs with five women. He named Flowers and four others, including former Miss America Elizabeth Ward Gracen and former Miss Arkansas Lencola Sullivan. Nichols would later drop his lawsuit, but the charges helped form the basis for tabloid stories alleging that Clinton had extramarital affairs.

During the recorded conversation with Flowers, Clinton recounted being read the list of women. He jokes, “I’ve got good taste,” and “I kinda hate to deny that.”

Here is a transcript of Clinton discussing the list:

GF: (laughter) You know what I said? I said, “At least he’s an equal op… opportunity f*cker!” (laughter)

BC: I’ve got good taste.

In an interview recorded on Friday, Flowers said the recorded conversations took place after she ended the alleged affair with Clinton in 1989 because she started dating another man.

Flowers said she thought that Clinton was trying to make her jealous by referring to other women as beautiful.

Flowers responded to Clinton’s assertion that “she was so good looking I wished it was true,” referring to one woman which whom he was accused of having had an affair.

“She was one of my best friends. And she is beautiful and she’s smart and startling. And I’m like, you know, really? You can tell by the tone in my voice. I said well, yeah, she’s not just beautiful, she’s smart too.

Flowers further commented on the section of the tape in which Clinton stated “I’ve got good taste” in response to being read the list of five alleged mistresses.

“Well, if I hadn’t been recording him, I would have told him that he was a jackass,” stated Flowers. “That he could quit talking like that. You know, at that point, I didn’t want to make myself look bad, but had I been able to really talk freely, I would have said, ‘you can knock that off. It’s not funny.’”

Flowers says she was Bill Clinton’s mistress for 12-plus years.

Flowers says she never sought to go public. Her name was put out there against her will as a result of the Nichols’ lawsuit. Three days after Star Magazine mentioned Flowers as Clinton’s alleged mistress, Bill and Hillary Clinton appeared in January 1992 side by side on 60 Minutes, where Bill denied a relationship with Flowers.

Clinton later admitted to one sexual encounter with Flowers in a 1998 deposition for the Paula Jones lawsuit.

After Clinton denied the affair during the 60 Minutes interview, Flowers held a press conference the next day, where excerpts of the tapes were played. Some sections of those tapes were provided to the news media at the time.