A blizzard of early reports show that by early voting by pro-Democratic African Americans has dropped significantly compared to 2012, giving a boost to Donald Trump’s prospects in critical swing-states, such as North Carolina and Ohio.

In North Carolina, early voting by African-Americans is sharply down, so “you will see a very heavy push in this state for the African-American vote by Hilary Clinton to try to make up some of deficit,” said Michael Bitzer, a professor of politics and history at Catawba College, in Salisbury, N.C.

The push will likely include fly-ins by the Democrats’ most popular speakers, he said, adding “I would say [Hillary] Clinton, I would say President [Barack] Obama, probably another visit by Michelle Obama.”

Nationally, “African-American enthusiasm has dipped compared with that in 2012,” according to the New York Times. That’s “a surprising and disquieting development for Democrats who believed Trump’s racial appeals and flirtations with the birther movement would generate more urgency,” the Times reported. For example, in the two Virginia districts with the largest percentage of African American adults, early voting has dropped by more than 50 percent, the Times said.

In Ohio, the decline of early voting in heavily Democratic African-American districts is causing worry for Democrats — and a shift of resources into the low-turnout areas. Hillary Clinton, according to the Blade newspaper, “returns to Ohio on Monday with early-vote rallies planned in Cleveland and Cincinnati, and President Obama will rally in Columbus on Tuesday, also to encourage that early-vote turnout.”

In Florida, “the bad news for Clinton/good news for Trump is that African-Americans and millenials are voting considerably lighter — so far – than four years ago,” the Tampa Bay Times reported Oct. 31.

Daniel Smith, a political science professor in Florida noted the rising level of early voting among whites and Hispanics, compared to to African-Americans.

In North Carolina, “white voters are currently 72 percent of all absentee ballots cast, with black voters being 22 percent and all other races 6 percent. This represents a steady continuation of the trends that we have seen, with white voters over-performing their 2012 numbers and black voters under-performing their 2012 numbers,” Blitzer said at his blog, Old North State Politics. 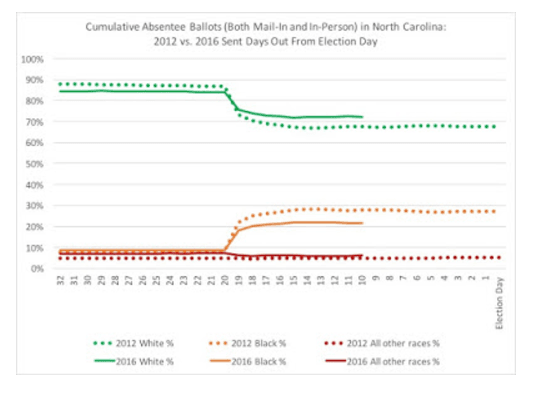 The drop in African-American turnout is one of the few powerful pieces of data to emerge from election oversight offices in the states.

Much of the data about early voting is too vague to show how the state’s race is going, especially because early voters are only a small proportion of total votes in races where the two candidates may be only a few points apart.

In Florida, for example, the state is releasing extensive daily reports about the numbers of early voters — but that data doesn’t show if early voters are leaning towards Trump or Clinton in the closely contested state. In addition, the state’s population has been changed by the arrival of at least 50,000 people from Puerto Rico, and the pace of early voting has been accelerated by pressure from state election officials, as well as by GOP and Democratic get-out-the-vote campaigns.

Moreover, Trump may be winning over a small but critical level of support from African Americans in Florida. According to the New York Times:

Mrs. Clinton has had nearly unanimous support among black voters in Upshot/Siena surveys, but not in this [Florida] one: She had a lead of 81 percent to 11 percent. It might not seem like a big deal, but the difference between that support and the 90-1 we saw from black voters in Pennsylvania covers about half of Mr. Trump’s lead.

The data about a drop-off in early voting by African Americans is predictive and useful because Obama got more than 90 percent of their votes in 2099 and 2016. But even that data can also be offset by other shifts in the electorate, such as the rising number of Latino voter and the rising percentage of political independents.

In North Carolina, the drop in early voting by African-Americans is happening alongside “a pretty significant rise in unaffiliated registered voters in this state casting in-person ballots,” said Blitzer.  So, he added, “it is anybody’s guess right now what next Tuesday will come out with.”