The number of self-described political moderates in the Democratic Party is shrinking as white Democrats rush themselves to the left, according to a new survey from Gallup.

In 2001, just after the departure of President Bill Clinton, self-identified moderates claimed 47 percent of the party, while liberals were only at 30 percent.

In 2016, the numbers had flipped to put moderates at 41 percent, and liberals at 44 percent. That was a large 20-point shift, including a 12-point shift during President Barack Obama’s two terms. 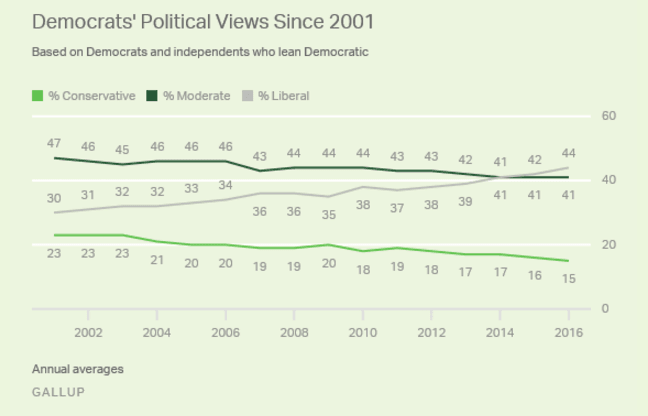 The shift is seen in Congress, where the 34-member “Blue Dog Coalition” of moderate Democratic legislators fell from 34 members in 2005, down to 17 self-described moderate members in January 2017.

Nationwide, the share of Americans who describe themselves as “moderates” shrank from 43 percent in 1994, down to to 34 percent in 2016, as the percentage share of self-described “liberals” rose from 17 percent to 25 percent, Gallup reported Jan. 3. That’s a 17-point shift.

The national shift “represents a hardening of political polarization between the two major parties,” Gallup concludes. “With most Republicans already identifying as conservative and more Democrats identifying as liberal, the parties are moving further apart ideologically.” 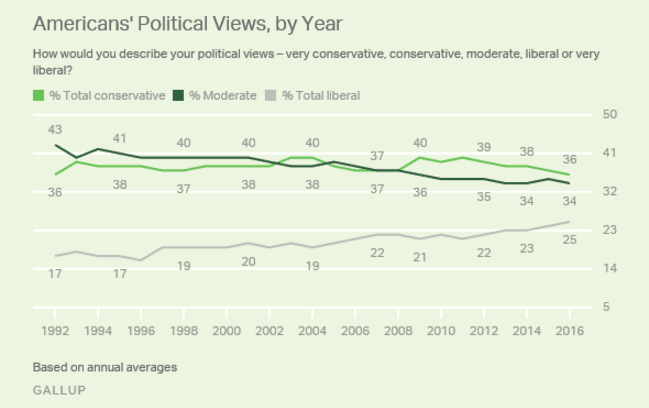 The share of Americans who describe themselves as “conservatives” has show little change from 36 percent in 1992 to 36 percent in  2016, according to the new survey, found here. The high-point of conservative self-identification reached 40 percent in 2010, when many Americans expected the GOP to roll back President Barack Obama’s federal expansion.

Less than 10 percent of Republicans describe themselves as liberals.

Within the Democratic, the leftward shift has been powered by greater radicalization among older and younger whites than among Latinos or blacks, says Gallup.  “The sharp increase in liberals among white Democrats, from 32% in 2001 to 50% in 2016 — has created more ideological separation between white and nonwhite Democrats. Over the same period, the percentage of nonwhites identifying as liberal increased only nine percentage points, from 27% to 36%,” said Gallup.